Time Capsule 1995-1997A 33-part series on history mined from the first 100 years of Arkansas Catholic and its predecessors. 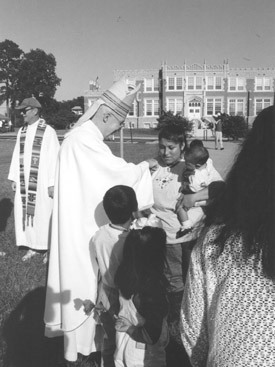 Arkansas Catholic file
A Hispanic woman shows reverence to Bishop McDonald by kissing his ring before he presides at the late afternoon Mass at Encuentro Hispano at St. John Center in Little Rock in 1997. More than 1,500 Hispanics attended.

Arkansas Catholic file
A Hispanic woman shows reverence to Bishop McDonald by kissing his ring before he presides at the late afternoon Mass at Encuentro Hispano at St. John Center in Little Rock in 1997. More than 1,500 Hispanics attended.

The Diocese of Little Rock continued to embrace diversity and spirituality in 1995-1997 by serving refugees, the burgeoning Hispanic population and the growing number of Catholics in the state.

The diocese continued to work with refugees, as the "only sanctioned refugee organization in state." A March 1, 1995, article reported that the refugee program began in 1974 when the diocese helped Vietnamese settle in Arkansas. Since that time, the program had helped between 9,000-10,000 people, primarily from Vietnam, Laos, western Europe, Czechoslovakia and Russia.

The Cathedral of St, Andrew celebrated its sesquicentennial, beginning Nov. 1, 1995, with the dedication of McDonald Hall. The year of celebration closed with a procession and Mass in November 1996. Bishop Andrew J. McDonald celebrated his 25th anniversary as a bishop in September 1997.

The first Bishop McDonald Golf Tournament took place in 1995, according to the April 1, 1995, issue. The event raised $10,000 for Catholic Charities. The first Red Mass was also held in 1995 at the Cathedral of St. Andrew.

The diocese began a new theology program in 1996. "Catholics in Arkansas will be able to get a solid foundation in Catholic theology, Scripture, liturgy and the sacraments without leaving the state," a July 13, 1996, article stated. The program kicked off in September 1996 with 100 students.

Father Thomas Keller, pastor of Our Lady of Good Counsel in Little Rock, bought property next to an abortion clinic on University Avenue in 1995 with money earned as a hospital chaplain in the Army. On the property he built offices for Arkansas Right to Life and a handball court.

The timing was significant as the issue of banning partial-birth abortions was debated throughout 1996 and 1997, with then-Arkansas Gov. Mike Huckabee signing the Arkansas law banning the procedure in April 1997. The Senate Public Health, Welfare and Labor Committe had previously tried to block the ban and keep it from a full Senate vote, the Feb. 15, 1997, issue reported.

The world lost a saint and pro-life advocate when Mother Teresa died Sept. 5, 1997. Before her death, she opened a home for babies in the United States reported in the issue dated June 24, 1995.

The closing of North Little Rock's St. Joseph Home, which opened in 1907, on Aug. 22, 1997, was a sad day for former residents and the Benedictine sisters who cared for them, according to the Aug. 16, 1997, article, "Benedictine nuns working at orphanage and day care watched over Arkansas' children for 90 years."

The growing Hispanic population helped the Catholic population increase in the diocese. It also brought to light the issues of immigration and the treatment of those here illegally.

Bishop Andrew J. McDonald released his pastoral letter, "Immigrants in Our Midst," to coincide with World Migration Day. Immigrants, he said in the Jan. 20, 1996, issue, are gifts from God.

"The history of the Catholic Church in Arkansas is a history of immigrant people. Our first bishop, Andrew Byrne, was a native of Ireland, and many of his countrymen followed him to this state, beginning in the 1840s. Many German and Swiss settlers also came during the 1800s, and these and the Irish were the majority of Arkansas Catholics during the rest of that century. Then came Poles, Slovaks, Austrians, Italians, Czechs, Cubans, Mexicans, Vietnamese, Laotians, and others. All of them have increased the numbers of Catholics in Arkansas and have strengthened and enriched our Church with their varied ways of living and expressing the Catholic faith," he wrote in his column discussing the letter.

He also discussed laws regarding illegal immigration, and called for them to be "humane and sensible."

A native Arkansan was among the victims of the Oklahoma City bombing, according to the May 13, 1995, issue.

Mark Bolte, 28, formerly of Bentonville, was the "last federal highway administration employee pulled from the rubble caused by the April 19 bombing of the Alfred P. Murrah Federal Building in Oklahoma City."

The tragedy of that day allowed for moments of grace, another article, "Oklahoma priest helps Rogers family," reported in the same issue. "Most of us, both Catholic and all religions, have been going to funerals," Father Lowell Stieferman said. "Most people don't ask the question why, but many have remarked about the good that has come out of this tragedy, of people helping people."

Bolte's parents, Joyce and Don Bolte, talked about how faith helped them in an April 6, 1996, article.

LRSS helping to revitalize Bible study around country: Australia to Zimbabwe, LR Scripture Study can be found in parishes in 43 countries

Arkansans pray for Mother Teresa, give thanks for Abba House

Pasquale's Tamales: The tamale that crossed the Rio Grande for St. Mary's Parish in Helena. The best tamale you will ever eat!