Time Capsule 2001-2003A 33-part series on history mined from the first 100 years of Arkansas Catholic and its predecessors. 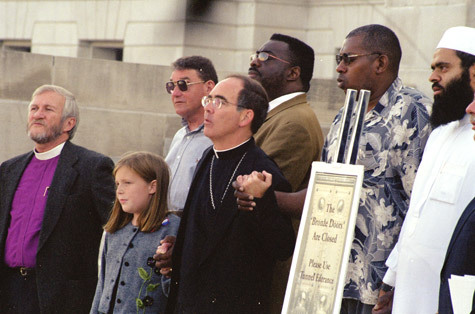 Arkansas Catholic file
Bishop J. Peter Sartain holds hands with representatives of the Episcopal, Baptist and Islamic faiths as they sing "God Bless America," at the conclusion of an interfaith prayer service Sept. 14, 2001, on the steps of the State Capitol. Bishop Sartain delivered the benediction at the service.

Arkansas Catholic file
Bishop J. Peter Sartain holds hands with representatives of the Episcopal, Baptist and Islamic faiths as they sing "God Bless America," at the conclusion of an interfaith prayer service Sept. 14, 2001, on the steps of the State Capitol. Bishop Sartain delivered the benediction at the service.

The biggest story of 2002 was the clergy sexual abuse scandal.

In January 2002 a defrocked Boston priest was convicted of indecent assault, but was accused of hundreds of other cases of abuse. Cardinal Bernard F. Law resigned amid allegations his diocese mishandled charges against abusive priests. Nearly 140 lawsuits were filed in Boston alone.

In March 2002, Bishop J. Peter Sartain issued a pastoral letter on clergy sexual abuse, which was read at all Masses. He reminded Catholics that the diocesan policy was written in 1992 and updated in 1996 to handle complaints made against clergy, religious, laity and paid and unpaid diocesan workers.

"Every case of sexual abuse of children is a horrible and reprehensible offense," the bishop wrote. "When a member of the clergy is involved, it is all the more disgraceful."

U.S. cardinals went to the Vatican in April 2002 to discuss the crisis. In the May 4, 2002, issue, Bishop Sartain commented on the U.S.-Vatican summit.

"Reaffirming my commitment to take very seriously allegations of sexual abuse, I join the Holy Father and all Catholics as we turn to God for healing, forgiveness and the grace to meet this challenge with uncompromising courage and harmony," the bishop said.

Then at the U.S. bishops' historic meeting in June in Dallas, the bishops approved the Charter for the Protection of Children and Young People that all dioceses had to adopt. It was called "one of the greatest efforts anywhere in addressing sexual abuse of minors."

A zero tolerance policy was adopted, meaning that anyone who had sexually abused a minor would not be allowed to work in the Catholic Church in the United States.

A National Review Board of laity was organized and began immediately gathering data on sexual abuse policies and practices across the country. The Office for Child and Youth Protection named its first director in November 2002. Kathleen McChesney was a former FBI official.

In July 2003 the diocese took steps to comply with the charter and updated the diocesan policy once again. At that time, the diocese released the names of the diocesan review board, which included a priest and a sexual abuse expert. The majority of the board was not employed by the diocese.

Terrorism was the top Catholic story in 2001. The headline in the Sept. 15, 2001, issue read, "Catholics should seek justice, not vengeance in aftermath of terror." Various archbishops and the pope commented on the attacks on the World Trade Center, the Pentagon and rural Pennsylvania. More than 5,000 people were killed.

On Sept. 14 Bishop Sartain celebrated a Mass in observance of the National Day of Prayer. More than 600 people crowded into the Cathedral of St. Andrew at noon.

"This is exactly what we need to be doing," the bishop said of the call to prayer.

The bishop also participated in an ecumenical prayer service on the steps of the state Capitol. Schools organized their own prayer services and remembrances.

When U.S. air strikes began in Afghanistan in October, some U.S. bishops and Vatican officials supported the retaliation while others were worried about civilian casualties.

The U.S. bishops wrote a pastoral letter called "Living With Faith and Hope after Sept. 11," saying military force can be "legitimate" but did not agree with excessive force or economic embargoes.

On the first anniversary, churches across Arkansas held Masses and prayer services to remember the dead. Gov. Mike Huckabee and Little Rock Mayor Jim Dailey spoke at a Cathedral Mass.

Other events were held around the world to pray for peace in 2002 and 2003 to condemn the possible strike on Iraq. The pope intensified his efforts to work for peace in Iraq in March 2003 by sending his envoy to talk to President George W. Bush. Operation Iraqi Freedom began later that month. Pope John Paul II said "violence and weapons can never resolve the problems of man."

Death of a legend

Msgr. George Tribou, described as a "meat and potatoes" teacher and principal for Catholic High School for 51 years, died Feb. 2, 2001. He was 76 years old. He was so well-known around Little Rock that he had two funeral Masses at the boys' high school -- one for students and parents and one for the public.

Msgr. J. Gaston Hebert, homilist and pastor of Christ the King Church in Little Rock, said his friend was the most influential priest in the history of the Diocese of Little Rock.

Msgr. Tribou continued to teach freshmen sex education/religion and junior and senior English until he was hospitalized two months before his death. He had friendships with Jerry Jones, owner of the Dallas Cowboys, and President Bill Clinton and met the pope in 1999.

A special section in Arkansas Catholic in the March 17, 2001, issue included Msgr. Hebert's homily, editorial cartoons by John Deering and recollections from former students and parents.

In May, it was announced that Dr. Mike Rockers, superintendent of schools, would become the new principal. On Feb. 1, 2002, it was revealed that a section of Lee Avenue in front of CHS was renamed Father Tribou Street.

Was consistory a dress rehearsal for electing next pope?

Saying goodbye difficult for Msgr. Hebert and his parish

Answering the call to serve: 22 men will be ordained to the permanent diaconate Dec. 14