Time Capsule 2004-2007A 33-part series on history mined from the first 100 years of Arkansas Catholic and its predecessors. 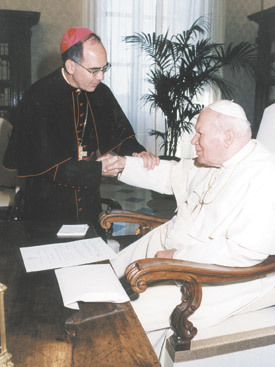 Bishop J. Peter Sartain greets Pope John Paul II during his first "ad limina" visit to the Vatican in 2004. The bishop's audience with the pope was scheduled for May 18, the pope's 84th birthday.

Bishop J. Peter Sartain greets Pope John Paul II during his first "ad limina" visit to the Vatican in 2004. The bishop's audience with the pope was scheduled for May 18, the pope's 84th birthday.

Arkansas Catholics mourned the loss of a pope and their bishop, while extending a welcome to hurricane refugees.

The years of 2004-2007 saw many changes in the world and at home that were reported in Arkansas Catholic.

Arkansans also coped with the reality of war in Iraq, the Church sexual abuse crisis and the excommunication of six nuns in the diocese.

In what was "believed to be the first time anyone in the Diocese of Little Rock" was formally excommunicated, six of eight sisters from the Monastery of Our Lady of Charity and Refuge in Hot Springs were excommunicated. The nuns were part of the Community of the Lady of All Nations, which is also known as the Army of Mary and is based in Canada. The Oct. 6, 2007, issue reported that the group's founder "believes she is the reincarnation of the Virgin Mary and a co-redeemer with Christ." The organization is not considered Catholic because of "false teaching on the Trinity and Mary."

The Church continued to deal with the aftermath of the sexual abuse scandal and implementing policies to protect children in the future. In the March 6, 2004, issue, the paper reported that a national study said that "4 percent of priests accused of abuse." All dioceses were expected to implement procedures to put them in compliance with the U.S. bishops' policies. An article in the same issue said the report described that with sexual abuse, the "'smoke of Satan' came into the Church."

Hurricane Katrina struck New Orleans and the Gulf Coast on Aug. 29, 2005, and thousands of displaced people had no place to call home. The diocese and people of Arkansas responded to this new wave of refugees with generosity and compassion, according to "Time and money pouring in to aid evacuees" from the Sept. 17, issue of Arkansas Catholic.

Arkansas lost its shepherd when the pope sent Bishop J. Peter Sartain to the lead the Diocese of Joliet, Ill., the May 20, 2006, issue reported.

"To be honest, it will not be easy to leave you. But the Church is bigger than any parish, any diocese, any state; and we will always share a spiritual bond more profound than any of us realizes. I have been blessed that in you God showed me just how much he loves the flock redeemed by his Son," Bishop Sartain wrote in his column in the same issue.

Arkansas Catholic published a special edition June 24, 2006, dedicated to Bishop Sartain and his "legacy of preaching and prayer." In that issue, parishioners from around the state shared their experiences with Bishop Sartain.

Bishop Sartain met the pope during his first "ad limina" visit to the Vatican in 2004.

"I was always amazed at his ability to communicate the Gospel clearfully and joyfully, even to large crowds," Bishop Sartain said in an April 9, 2005, article. "His appeal to young people, even when he was frail and elderly, was nothing short of amazing."

The April 16 issue reported that "millions mourn death of Pope John Paul II." Calls rang out to name him a saint. His cause for sainthood was opened by his predecessor, Pope Benedict XVI, in May 2005.

Terri Schiavo and the right to life

The right to life was tested in 2004 and 2005 when the end-of-life case of Terri Schiavo was played out in U.S. courts. Schiavo suffered brain damage when her brain was without oxygen for several minutes after she collapsed 15 years earlier because of what doctors believe was a potassium imbalance. Her parents fought with her husband for seven years over the right to make her medical decisions for her. They later fought the removal of her feeding tube in court, but state and federal courts ruled against them.

Catholic leaders had consistently called for her to receive food and nutrition.

"God will call Terri Schiavo to himself when it is her time to die. It is not for us to determine when that time is, Cardinal William H. Keeler said.

On March 31, Terri Schiavo died -- 13 days without her feeding tube -- of dehydration. Her parent's last appeal to the Supreme Court was rejected hours before her death. She was 41 at the time.

At the 2006 March for Life in Little Rock, Suzanne Vitadamo spoke about the death of her sister to a rain-soaked crowd of approximately 3,000, the paper reported on Jan. 28, 2006.

"My sister was not terminal," she said. "She was supported by feeding tube, nothing else, no respirators or tubes of any kind attached to her ... She was not comatose. She was not brain dead."

The abortion clinic was next to the Life Center, built in 1995 as a place of prayer.

Church leaders: Iraq will have to travel long road to peace

NLR Knights will install four monuments to the unborn

Pope appeals for aid to victims of tsunamis

Sister was ready to die for Brazilian peasants, rainforest

Good Counsel school will close May 26, plans for future

Msgr. O'Donnell retiring from parish but will stay active

After three-year halt, bingo games return to parishes and halls

Pope relaxes restrictions on use of the Tridentine Mass