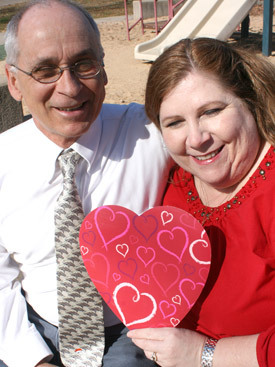 Malea Hargett
Steve and Elaine Lienhart, leaders for Worldwide Marriage Encounter of Arkansas, believe it is important to put their marriage first all year round, not just on Valentine's Day. The Lienharts work with other married coupl es to host two WWME weekends a year at Subiaco Abbey.

Malea Hargett
Steve and Elaine Lienhart, leaders for Worldwide Marriage Encounter of Arkansas, believe it is important to put their marriage first all year round, not just on Valentine's Day. The Lienharts work with other married coupl es to host two WWME weekends a year at Subiaco Abbey.

It's that time of year again, the time when many Catholic couples will celebrate the feast of St. Valentine Feb. 14 by sharing tokens of romantic love with each other.

For some, it will mean carefully selected Hallmark cards that say just the right thing, or perhaps long-stemmed roses followed by a candlelight dinner for two.

But, long after the roses have wilted and the cards have been stowed away, what can couples do the other 364 days a year to keep the love embers burning?

"The popularity of certain reality television stars indicates that the American culture almost glamorizes divorce," said Elaine Lienhart, who joins husband Steve in completing their first year of service this month as area leaders for Worldwide Marriage Encounter of Arkansas.

"High divorce rate statistics clearly show that tokens of love once a year is just not enough," added Steve Lienhart.

WWME weekends have been offered in Arkansas ever since J.C. and Debbie Finton, a retired couple relocating from Houston to Perry County, planted the seeds for its growth in 2005.

Arkansas boasts nine couples from around the state who help offer the weekends. And the two "circle" support groups for couples in coming off a weekend have expanded to five -- the River Valley Circle near Fort Smith, the Northwest Arkansas Circle near Fayetteville, the Sacramental Love Circle at Pocahontas, the Little Rock Circle and the Little Flower Circle near Morrilton.

The Lienharts, members of St. Edward Church in Little Rock, were motivated to attend a WWME weekend in February 2009 when active Catholics who were close friends began contemplating divorce.

"We had a good marriage, but we didn't want to take a chance on drifting apart," Elaine Lienhart said. "We knew so many people going through troubles and we wanted to keep our marriage from falling into some of the same traps."

The weekend was a real "eye opener," according to Steve, a Catholic school teacher and track coach who originally intended on squeezing in a little bit of school paper grading in between sessions with Elaine.

"I never picked up the grading pen," Steve said, laughing.

"It's one of the best decisions I've ever made," he continued. "I would strongly encourage any couple considering a weekend to do it. Their marriage deserves it. Everyone deserves a weekend to just focus on their spouse."

Worldwide Marriage Encounter is currently offered twice a year at the Coury House Retreat Center at Subiaco Abbey and works in cooperation with the National Marriage Encounter movement in Arkansas, which is offered at the parish level. In addition to the Feb. 10-12 weekend, another weekend will be held at Subiaco Sept. 21-23.

Bishop Anthony B. Taylor was one of several seminarians who participated in the first Italian Worldwide Marriage Encounter weekend in Rome in the late 1970s.

"Naturally the things the seminarians shared among ourselves were different from that of the couples, but we did reflect on relationships and gain insights regarding communication within marriage," Bishop Taylor said.

"Marriage Encounter wouldn't exist without the community of couples who have attended a weekend," Elaine Lienhart said.

Fortunately, long-lasting and fulfilling marriages do happen, although they may often be overlooked by mainstream media. A recent project of the Worldwide Marriage Encounter movement has focused on finding the longest married couple in America.

The Lienharts said there were 256 nominations received from 47 states in the effort to find the longest married couple in the United States. Based on the nominations submitted, the declared winners are Wilbur and Theresa Faiss of Las Vegas, who have been married 78 years.

Not to be outdone, Arkansas' longest married couple is Roy and Vola Edgmon from Springdale, who also celebrated 78 years of marriage just one month after the Las Vegas couple.

A couple does not have to have either a troubled marriage or be newlywed to benefit from a weekend away to focus exclusively on their marriage. Although JoAnn and Rich Betz, parishioners of St. Stephen Church in Bentonville, have been happily married since 1966, they decided to take advantage of the WWME weekend at Subiaco last September.

"He went because I wanted to go, but we both just loved the whole weekend," JoAnn said.

"The format of the weekend was extremely helpful in opening up a dialogue between us," Rich agreed. "There was no pressure; it was just a place where we didn't even know the world was out there. JoAnn and I really feel that even as good and strong as our marriage is, the weekend is still the perfect opportunity to make your marriage even greater."

Rich said he touts a weekend away as often as possible. He said that whether Catholic or non-Catholic, any couple can benefit. And even though carving out time is tough, it is well worth it for the investment it makes in a couple's marital health, he said.

"What I would say to someone who is thinking about going, but not sure if it's for them, is 'Hey, if you don't enjoy it, I will personally refund your application fee.'" Rich concluded.

The diocese's Family Life Office joins the U.S. Catholic bishops in recognizing the importance of the marriage sacrament. In addition to supporting the efforts of both WWME and National Marriage Encounter, the office also hosts a convalidation marriage preparation day at the St. John Center in Little Rock. The day is geared for couples married in civil ceremonies who are being prepared for marriage within the Church.

Also, for those marriages that are hurting or troubled, there are Retrouvaille weekends offered in the state and region.

For more information about marriage ministries, contact the Family Life Office at (501) 664-0340 or dolr.org/family-life​.