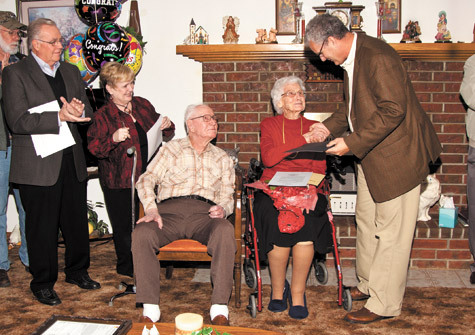 LOWELL -- The official honeymoon was short for Roy and Vola Edgmon, but their 78-year marriage is a near-record setter and the Edgmons were recently named Arkansas' longest-married couple by Worldwide Marriage Encounter.

The Edgmons still live in the Lowell home they purchased in 1991, but they recall clearly the hardscrabble existence of their early years together. They had no car, no electricity and no running water. The couple grew most of their food and worked six days a week, taking a break only on Sunday.

Married by a justice of the peace on May 28, 1933, the Edgmons spent the rest of their wedding day at a nearby gospel sing. The next day, Roy went to work in the fields, planting corn. Roy was 19 years old; Vola was 20.

It was "the good old days," Vola still firmly believes.

Nominated for the WWME honor by their granddaughter, Terry Reams, the Edgmons missed taking national honors by just one month. The winning couple, Wilbur and Theresa Faiss from Las Vegas, was married in April 1933. The 2011 winners, Marshall and Winnie Kuykendall of Lordsburg, N.M., celebrated their 83rd anniversary on Valentine's Day.

Worldwide Marriage Encounter has Catholic roots but the program (and the now-annual longest-married couple competition) is open to couples of all faiths. The Edgmons are long-time members of Phillips Chapel Free Will Baptist Church in Springdale where Roy served as a deacon for more than 50 years beginning in 1954.

Originally from Newton County, Vola grew up in Swain while Roy lived about five miles away in Mossville. Despite the rural area, they both had active social lives.

"It wasn't a problem to get a beau back then," Vola said, grinning at the memory while her husband sat quietly by. And as for Roy, "He had more girlfriends."

And what did they do on a date?

"Back when we dated, you did that on Sunday," Vola said. Sparking, as they called it, was always on Sunday, the only day people didn't work. It wasn't necessarily after church because services were held only once a month. "The boys would come and stay all day. We'd go off...sit there and talk."

The couple's three children were all delivered by Roy's mother, who was a midwife. The family lived in such rural country, "You'd have died before a doctor got there," Vola said.

Soon after their third child was born, Vola was home with the children when the house caught fire. She tried to climb a ladder to dump a pail of water on the flames but tipped the bucket and lost the water. The water supply was some distance away so she got the children outside and directed the 3-year-old to watch his infant sister. She dispatched the 5-year-old son to get his father, working in a nearby field.

Vola then made several trips into the burning house to retrieve the family's few possessions, including a bag of dried beans intended as winter provisions and a bundle of clothes. Roy made a last trip inside the structure when he arrived and retrieved an eight-day clock he had purchased for 25 cents. Just as he exited the door, the building collapsed.

For a time afterwards, the Edgmons lived with Roy's parents before moving to another place, a house, Vola says, that "wasn't fit for a dog to live in." Eventually, the house was rebuilt where their home had burned.

In subsequent years, the Edgmons moved to Prairie Grove in Washington County and then Cave Springs. In 1948, Roy recalled, they got their first car, a two-door 1938 Chevrolet purchased in Bentonville.

By 1991, the tasks of caring for a herd of cows was becoming a strain, Roy said, so the couple moved to town in Lowell. That doesn't mean they gave up working, however. They've had a large garden and canned all the produce every year until last year when Roy was slowed by a stroke. They now get a little assistance from a helper who comes in for half-days, but they have no intention of sitting idle.

Vola intends to plant vegetables and tomatoes in a smaller flower bed nearer the house this year. A grandson-in-law has offered to tend the larger plot under Roy's direction. Vola still quilts and Roy reads the newspapers daily. They both read the Bible regularly.

As national winners, the Las Vegas couple won't be eligible to enter again. But state winners may compete and Terry Reams plans to nominate her grandparents again in 2013.