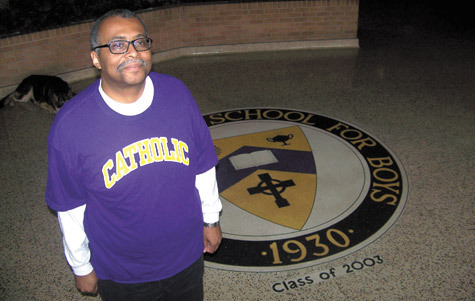 Dwain Hebda
Reggie Rogers, a member of St. Edward Church in Little Rock, has been Catholic High School's biggest fan for 28 years. He attends nearly every home and away game for several sports.

Dwain Hebda
Reggie Rogers, a member of St. Edward Church in Little Rock, has been Catholic High School's biggest fan for 28 years. He attends nearly every home and away game for several sports.

By day, Reggie Rogers is every inch the mild-mannered Everyman. But on Friday nights and weekends throughout the school year, a startling metamorphosis occurs. Donned in his trademark purple and gold, no matter the season or the weather, his alter ego emerges.

"It's exciting to watch the kids give everything they have," he said. "Lots of times, we are outmanned, outweighed, underdogs. But our boys always compete."

It needs to be underscored straightaway, that all support for Catholic High athletics -- as well as for all other school activities -- is welcomed and appreciated from the star quarterback down to the freshman benchwarmer. Rogers himself wholeheartedly means this when he says it and is quick to deflect any special recognition from himself to athletes' parents and family in this regard.

Even so, Rogers' status as CHS Superfan is hard to dispute.

Since September 1984, Rogers has missed only five Rocket football games and six basketball games. In the late 1990s, he started attending baseball games and in 2000 started following the soccer team with similar devotion. Home games, away games, playoff drama and losing season blowouts, nearly every one of them saw Rogers sitting in the stands, rooting for his high school alma mater.

As if that weren't impressive enough, consider Rogers has never married or had any nephews. Not one Rogers who has ever played for Catholic High in that time has been related to him, at least not by birth. But he considers every one of them -- along with all the Smiths, Jones and Johnsons through the years -- to be part of his extended family.

"Catholic High is very special in the way it creates a bond, a loyalty," he said. "I go up to boys now and I tell them 'I know your uncle,' and 'Don't drink any beer after the game tonight.'"

The Rockets began "putting up with" Rogers in the stands in 1973 when he completed his studies at St. Edward School in Little Rock and reported to Catholic High as a freshman. While one might think his love for the school's athletics was forged on the playing field or court, such is hardly the case. A self-described geek, he played the alto saxophone in the band and would also distinguish himself in the school's Junior ROTC program.

Ironically, Rogers' so-called nerd status was his first lesson as to the depths of the CHS brotherhood. Whereas other high schools may have relegated him to the fringes of acceptance, neither his choice of activities nor his minority status were ever more than surface differences among his classmates, with whom he remains close to this day.

"There weren't many black Catholics to begin with, period," he said. "There were probably five or six in my class, but race was never anything I ever thought about or had a problem with. We were all purple and gold. We all suffered through the heat. We were too busy trying to stay cool and handle our academics, and we were all in that together."

"Dad loved Catholic High," he said. "It became an anchor during a very difficult time."

For someone who never played the game, Rogers has had an almost Forrest Gump-like talent for finding himself present at important sports moments. As a high school student, he watched the Rockets go deep into the state basketball tournament and play against Hall High School standout and future NBA star Sidney Montcrief. At Notre Dame, he was in the stands as the Fighting Irish won a national football championship, led by NFL Hall of Famer Joe Montana.

Upon returning to Little Rock, he began his trek toward Superfandom by watching the Rockets take back-to-back state football titles in 1984 and 1985. He witnessed four of the soccer team's state titles including the threepeat in 2009 through 2011. And, in 2008 he watched as, "the prayer was answered for a lot of us," he said, referring to the Rocket's first and only state basketball championship.

But for all the big games he has seen over the years, when asked to list memorable moments, Rogers as often as not talks about contests that only mattered if you were there. He recalls games where fans sat out lightning delays or witnessed signs of respect like opposing student sections showed up in CHS' trademark shirts and ties.

Many of the school's finest athletes he lists by name, but one of his favorites, though virtually anonymous, symbolizes the Catholic High spirit.

"I can't remember the young man's name, but I remember one year we had an offensive lineman who couldn't have weighed more than 170 pounds," he said. "Every week he was facing opponents who were 250, 280 pounds and he fought hard every single game."

In 1997, Rogers' status as one of the school's greatest supporters became cemented in CHS lore as he received the Outstanding Alumni award.

He's recognized at a lot of games both at home and on the road, especially by officials with whom he has become more vocal than in past years. As he gets older, Rogers said, he has allowed himself that one trapping of his elder statesman status. Other than that, don't look for him to go anywhere except to the next game.

"We need a baseball state title. We've been so close and I think this could be the year" he said of what keeps retirement at bay. "And, not to be greedy, but I'd like to see another football championship. That would be very, very special.

"The coaches are doing a great job, but I like to kid them that they need to speed this up because I'm getting old," he said with one last laugh. "I can't stay out here forever."