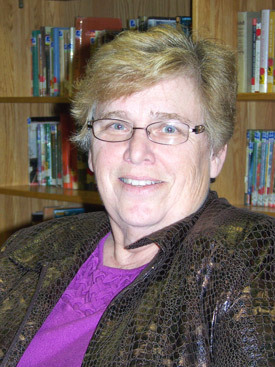 Dwain Hebda
Marianne McElyea's 30 years in religious education at St. Theresa Church in Little Rock began as a way of giving thanks to God.

Dwain Hebda
Marianne McElyea's 30 years in religious education at St. Theresa Church in Little Rock began as a way of giving thanks to God.

Family: Husband of 42 years, David; one daughter, Natasha; and one granddaughter, Mia.

Why you want to know Marianne: A native of the Netherlands, Marianne came to the United States with her native Arkansan husband in 1971. After his conversion to Catholicism, she looked for a way to give thanks through action for his entering the Catholic Church. She chose teaching and has been involved with the faith formation at St. Theresa Church in Little Rock since 1982.

Arkansas Catholic's theme this year is "Catholic Beyond Sunday." How do you remain committed as a Catholic beyond Sunday?

As a teacher, the Church asks me to accomplish certain things. With a lot of my students, I'm very often the only person who is there to teach them about their faith or about the sacraments. I take that responsibility very seriously. When I come home I want to feel that I did that to the best of my ability.

Jesus was often called "teacher." Given that, what extra significance does that title hold for you?

We sometimes hear of the frustrations teachers face, that sometimes leads to their leaving the profession altogether. What has kept you here so long and preserved your enthusiasm?

It's not just me. I have been surrounded by other dedicated teachers some of whom have been here for 20 years or more. No one can run a program by themselves. They are my family.

As an immigrant yourself, how do you view the current debate in the United States regarding immigration reform and how it fits within the goals of a parish community?

When we look in the mirror, we see God's creation. All of us. To me, when we come together I don't care about documented or undocumented. All I see are Christ's people.

You've tried to retire from directing the religious education program at St. Theresa's twice and on the second try you were succeeded by your daughter. How does that relationship work?

It's worked well. At first, I asked her if she wanted me to drop out and she said she didn't. That first year, of course, there was a lot of talking while she was learning the job, but if I ever came on too strong, she wasn't afraid to tell me and I backed off. No problem, you're the boss.

That directness seems to run in the family. You're not known for backing down when you feel there is something that needs to be said, are you?

I got that from my dad. I was raised with three brothers and my father's philosophy was always that I should have the same rights as the boys and that includes to my opinion. We had a sweetheart of a mother, but she saw things differently. She thought I should just cook, iron and keep house, but my father wouldn't allow it. He always said I should not be afraid to make my point, as long as I had a reason behind it.