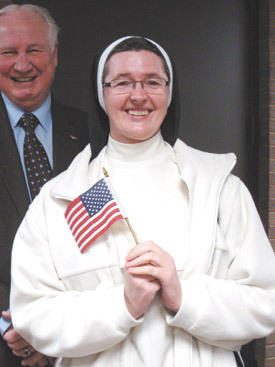 When Sister Joachim Celinska, OP, came to America in 2000 she couldn't speak a word of English, so she never dreamed she would become a U.S. citizen.

"This was the first time I was in court. They welcomed us. We started with a prayer of thanksgiving to God, prayed for our country and prayed for all of us," she said. "I felt like I was in church. The ceremony had a beautiful spirit of patriotism."

Growing up in Poland under Communist rule with two sisters and two brothers, her parents were members of the national underground and raised their children in the Catholic faith.

As a teenager, Sister Joachim loved Pope John Paul II and prayed his vocation prayer daily for an increase in vocations.

"I prayed every night, not realizing that Jesus had a plan for me," Sister Joachim said.

She did not want to be a nun herself. In fact, she was angry when a friend told her she was entering the convent.

"I told her, 'You are stupid girl. You are wasting your life.' I was judging without knowing about the religious life. I was angry at my friend, even though I was praying for vocations."

In seventh grade, she heard a voice in her own heart to be a nun, but she ignored it. Six months after her friend entered the convent that voice returned.

"Lord, this is not correct. I have two sisters, you must mean this for one of them," she said. "The voice in my heart was so strong that I couldn't ignore it. I started to pray for myself when I prayed for vocations. It was the only thing that I knew to do."

She was at a crossroads in her life. She prayed for God to help her find a job and a place to live.

Even though it was very difficult to find a good job during the Communist time, she did. Her aunt had left her home to Sister Joachim when she died. And she was dating. Wasn't this what God wanted for her?

"I was sitting in an empty church and had a very strong feeling. I was to give up everything I have and follow Jesus. And I did," she said. "I'm happy and would never choose another way."

She entered the Dominican Sisters of the Immaculate Conception in 1987, two years before communism fell in Poland.

Her mother was happy, but her father felt she was ruining her life.

"At my first profession, he saw I was happy and he came to accept that this was my life. It took him four years to accept it," she said.

After she took her final vows in 1995, she taught religion in public schools in Poland as is the custom there. Her superior asked her to go to the United States in 2000.

She came to Mountain Home to serve the Polish community at the age of 34, with fellow Dominican Sister Santina Purcha, OP.

"The first day I was crying. I couldn't understand the people. I took it step-by-step, day-by-day," she said. "Somehow, I survived."

She took English as a Second Language classes and after a year transferred to Milwaukee to continue her studies. She graduated with a bachelor's degree in social work in 2007 and returned to Arkansas.

She loves the outdoors, so Mountain Home is a good place for her.

"It's beautiful here. What I like most is the sunrise and sunset. These are the most beautiful gifts God has given to us," she said.

The people in Mountain Home welcomed her and Sister Santina, who is also applying for citizenship.

The two nuns minister to the sick in the community, teach religious education and help families in the parish and community.

"The parish people are very friendly here," she said. "All the people are nice, open and easy to work with. When we visit the hospice, we visit everyone. This is the time when family is gathered together at a difficult time. We pray together. I have never had a negative response from people of other faiths."

At the Feb. 10 ceremony, she said there were 35 people from 13 different countries who received their certificates of naturalization.

"This year, I'm going to vote for the first time," she said. "America is a beautiful country. God really loves this country because he's given freedom. We know what it's like to live under oppression. I wish and pray for all American people to take advantage of that freedom and thank God for freedom of religion, so they can express their faith freely."