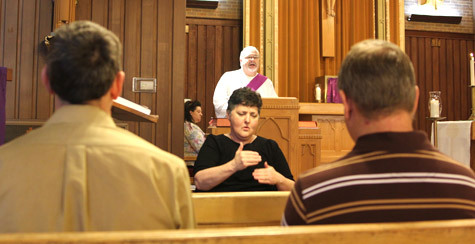 When Catholics who are deaf make a joyful noise to the Lord, they do it with a flourish of fingers.

Every day they face isolation in a hearing world, even when it comes to expressing their religion.

In Arkansas, deaf Catholics are a minority within a minority, and they are acutely aware of the lack of resources for their small community. Their hope is to be able to worship and live a full faith life just like any other Catholic in the state.

But for a deaf Catholic in Arkansas, they are lucky if they can go to Mass and understand what is happening.

"When the organ's really loud, you can feel that, but that's about it," said Betty Babin of Little Rock who was born deaf and is now also blind.

While hearing Catholics take their cues from what they hear during Mass, Catholics who cannot hear are left in the dark.

"You'd just do a lot of praying. Without an interpreter, you're just kind of watching to see where you are at and you watch the other people and do what they do. Now, I can't go without an interpreter. You have to understand what's going on," said Betty's son, Art Babin who was also born deaf.

At the 10:15 a.m. Sunday Mass at St. Mary Church in North Little Rock, deaf Catholics have the opportunity to have an interpreted Mass through Nancy Quinn, a Catholic who has been interpreting Mass since the 1970s after a couple asked if she would consider interpreting at Mass.

"I had no idea what that meant. I did not have the credentials. They were kind enough and patient enough with me that I just gave it a try," she said. "Then I started learning about interpreting as a profession. I went and got credentialed. I think it was the Lord pushing me along."

It's a common experience for deaf Catholics to attend Mass without an interpreter, but a frustrating one.

"If anyone needs an interpreter, churches can hire one," Quinn said.

Deaf interpretation is also available at the 5:30 p.m. Saturday Mass at Our Lady of Fatima Church in Benton.

Quinn became involved in the deaf community while studying special education at the University of Arkansas at Fayetteville. The subject fascinated her, and she began learning sign language.

She went to teach at the Arkansas School for the Deaf in Little Rock, where she continued to study American Sign Language. A family asked if she would interpret Mass for them at Our Lady of the Holy Souls Church in Little Rock.

She has interpreted at Holy Souls, Christ the King and St. Mary. She's also willing to talk with anyone who is Catholic and interested in interpreting the Mass.

"I'd like to encourage anyone thinking about it to consider interpreting. We need more people. A long time ago someone trusted me when I had no clue what I was doing. It's a great responsibility, but very rewarding on so many levels."

As a bonus, Quinn met her husband Jim, who is deaf, while interpreting the Mass at St. Mary. Jim grew up in an all-hearing family in Kansas City, Mo. He went to church regularly, admittedly, he said, because his parents made him.

"I was clueless. I didn't know what anything meant. I can lip read fairly well. I watched them when they would pray the 'Hail Mary' and after a while I started to understand," he said. "People would stand up and sit and stand up and sit. I didn't understand what that was about until they had a special group for people with disabilities."

In college, he stopped going to church. He came to Arkansas after teaching deaf children in the Philippines through the Peace Corps.

His mother told him about an interpreted Mass after seeing a photo of Nancy in a newspaper article. He went back to church and met Nancy. Three dates later, they were engaged. In 1985, they married.

The Babin family came from Louisiana where there were more Catholics and more resources for deaf Catholics.

"I do enjoy life here. It's different than Louisiana. I grew up in Louisiana. There was a Catholic Deaf Center in Baton Rogue, so lots of deaf Catholics. But when I moved here there were very few," Art Babin said.

Betty communicates through sign language, and by feeling her son's hands as he signs what others are saying.

One day, Art will no longer be able to see either, which will make worshipping at Mass even more difficult. He already cannot drive or read closed captioning on the television.

Some deaf Catholics do leave the Church, they said, for other churches with deaf ministries.

But for this group, their Catholic faith is a deeply held belief. Being Catholic is what they know and something more.

"I think God has given me a feeling that this is my Church. When I go to another church, there is something different inside that doesn't seem to feed me. I prefer the Catholic Church, to continue there, where I grew up," Jim Quinn said.

He did join another church's Bible study. Once a priest was upset over that, but Jim explained that there was nowhere else for him to go.

"I still have Catholic and Mass as my focus, but I want to be fed with a fellowship. The focus of the Bible is so important. I want to learn more through the Bible. It's not enough for me to just come to Mass. I want more," he said.

Joann O'Conner has lost her hearing over time and will eventually lose it completely. She's not culturally deaf, but has been taking sign language.

She moved to Arkansas two years ago and tried to find a church where she could participate.

In Texas, they had closed captioning screens at the Mass. She only recently learned about the interpreted Mass at St. Mary and returned to church.

"I found that people in the deaf community are so supportive of anyone trying to learn the language. That's one of the reasons that I started coming here. I noticed that every Sunday, I understand more of what she says," O'Conner said. "There are people out there who would come to church if they understood what was going on. I think that applies not only to our deaf community, but we have a lot of people who are hard of hearing that can't hear what is going on."

A true "deaf Mass" is a joyous experience although to hearing Catholics it would be a silent one, much like the experience deaf Catholics have of hearing Mass.

"When you have a deaf church, it's really different than when you go to a hearing church. When you have what you call a 'deaf Mass,' which means a priest who can sign for himself, you don't have a lot of music. You just don't need that music because we can't hear that. In a deaf Mass everybody signs, so it is more ASL. I grew up in a deaf family, so ASL is my first language. When I'm with hearing people, I sign more to English," Art Babin said.

It's something deaf Catholics in Arkansas don't get to experience unless they go out of state.

"Jim and I have been able to go to a few deaf Masses and deaf church. It's such an inspiring thing, because I think like with Spanish or any other culture or language, I tend to say you're really with your people, so you feel more one," Nancy Quinn said. "It is a big difference to be in a deaf church than to come to a hearing church. It's not a criticism. It just is different."

The hope of deaf Catholics in the area is to one day have a deaf ministry, or even a regular retreat where a priest who can sign can offer Mass and faith formation for them.

"I know for me, my dream will be that hearing or deaf, they all know sign," Jim Quinn said. "Especially a priest, whether the priest is hearing or deaf, that he knows sign so he knows the language and the culture. I'm still praying that someone comes here for us."

For deaf Catholics in Arkansas, they want to be part of their parishes, Betty Babin said, although oftentimes barriers exist for them.

"As a child, I remember Father Walsh coming to church and to our home (in Louisiana), and he could sign. It was just incredible. It opened up so much. I could watch him and know," she said. "If you have a priest that would even be willing to learn sign, that's fine. I like to go to church near my home, but there's no interpreter."