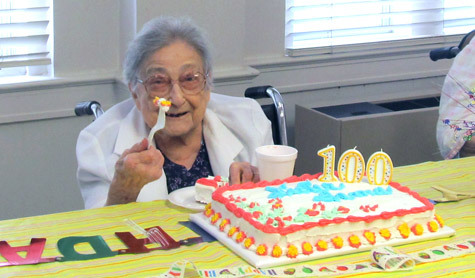 Maryanne Meyerriecks
Sister Irma Twenter, OSB, has birthday cake in recognition of her 100th birthday April 3 and her 75th jubilee as a Benedictine sister. She is originally from Clear Creek, Mo.

Maryanne Meyerriecks
Sister Irma Twenter, OSB, has birthday cake in recognition of her 100th birthday April 3 and her 75th jubilee as a Benedictine sister. She is originally from Clear Creek, Mo.

Enjoying cake and ice cream with her religious community culminated several days of festivities, during which Sister Irma was visited by family from Missouri -- five nieces, two great-great nieces and her only surviving brother Alfred -- and feted with a Saturday night pizza party. Pope Benedict XVI sent her a papal blessing in recognition of her birthday and coming 75th jubilee as a Benedictine sister. President Barack Obama and First Lady Michelle Obama sent birthday greetings and an autographed family photo.

Sister Irma first heard God's call when she was in second grade in St. John School in Clear Creek, Mo. As the third oldest of 10 children, she was her mother's helper with talents in cooking, cleaning, sewing and caring for her younger brothers and sisters. When she was 22, her cousins, Sisters Bernice Kraus and Theresa Marie Twenter, OSB, of St. Scholastica Monastery visited Clear Creek for a parish picnic. Rosaline, Sister Irma's birth name, told her family that she wanted to go to the convent with her older cousins.

When she told her cousins she wanted to go back to St. Scholastica with them, they put a veil on her head and told her she would make a good sister.

After making her profession on June 24, 1937, Sister Irma served as a housekeeper and kitchen worker at the Crawford County Memorial Hospital in Van Buren; Subiaco Abbey; St. Mary School in Lake Village; St. Mary School in Altus; Archbishop O'Brien School in Russellville; St. Boniface School in Fort Smith; and several other missions in Arkansas, Texas, Missouri and Louisiana. She served as monastery seamstress in the 1970s. From 1988 to 1993 she worked in rural ministry and started quilting groups at St. Mary Church in Helena.

"When Sister Irma was giving up her best talent -- oil painting," niece Mary Ross said, "she was talking about what talents she may still have to give and decided to make greeting cards for others."

Sister Irma's greeting cards are displayed and sold at the monastery gift shop.

In later life, Sister Irma, who always tried to keep the Benedictine balance between work and prayer, has had more time to pray and read. In a recent issue of St. Scholastica's vocation newsletter, "The Gatekeeper," she urged those who were discerning a call to religious life to "listen to what way of service God is calling."

"Pay attention to the little things," she said. "It is good to meditate and read the 'Lives of the Saints.' Personally, I love to pray the rosary. If you keep your mind busy you can remember more things and accomplish more for the love of God. God will always be there to help you."

Niece Maryann Schuster said Sister Irma's joy has been a constant throughout her life.

"Sister Irma was always happy about choosing a career as a nun," Schuster said. "She was happy to visit her family and made a point of seeing all of her brothers and sisters on her visits. But when it was time to go home to the convent, she was ready to go. She never did have any complaints about where she was sent to do God's will."

Surrounded by her family and religious community, Sister Irma expressed thanks for her 100 years of life.

"I am so thankful for all of God's blessings," she said, "and I was so surprised."