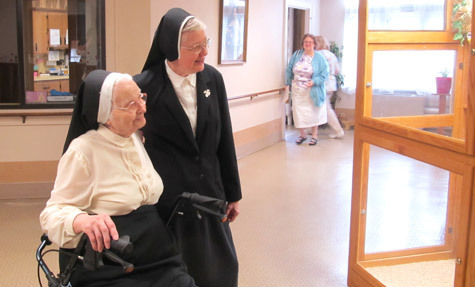 FORT SMITH -- When it comes to vocations, the Lord works in mysterious ways. Sister Delores Vincent Bauer, OSB"s call to the Benedictines at St. Scholastica Monastery in Fort Smith began with a chance meeting between her aunt, a Dominican sister from St. Catherine"s, Ky., and Sister Danielle Wolf, OSB, who worked at St. Joseph Orphanage in North Little Rock.

"My aunt (Sister Colette Bauer, OP) met Sister Danielle at a workshop in 1970," Sister Delores Vincent said. "I was teaching in Nebraska, and she knew I was looking for a change. She told me about St. Joseph"s, and my friend and I spent the summer there, picking blackberries, working in the yard and helping with the children."

Sister Delores Vincent went back to St. Joseph every summer to work and spend time with the children, eventually deciding to leave her teaching job in Nebraska to work at St. Joseph full-time.

"I moved to Arkansas in 1977 and worked at St. Joseph"s from 1977-80," she said. "If the old walls could only talk. The grounds and buildings were gorgeous. The sisters were pretty special. There was a chapel at the orphanage, and their work revolved around prayer. I worked with the kids and on the grounds. We had animals there back then -- hogs, chickens and cows. All of the sisters were a good example of religious life, especially Sister Charlene Lindemann. She was not a highly educated woman, but she had an extremely close relationship with the Lord. She was a hard worker who loved people."

While living in Little Rock, Sister Delores Vincent went on a retreat at Subiaco Abbey and got the first inkling that God was inviting her to religious life.

"It reminds me of St. Paul being struck by lightning -- just two seconds, like lightning hit, 'Be a sister,"" she said. "And then I started bargaining and made a lot of excuses. I didn"t talk about it. The call would come and I"d push it away. I finally talked to the sisters and visited several communities, including the Olivetan Benedictines in Jonesboro."

Entering St. Scholastica Monastery meant leaving St. Joseph for the postulancy and the novitiate. She made her profession in 1982 at a Mass celebrated by Bishop Andrew J. McDonald. In his homily, he said the former farm girl, who was the only student in her grade level at the one-room school house in Spaulding, Neb.,, was both "the smartest and dumbest student" in her grade.

She taught in Arkansas for more than nine years before returning to St. Joseph in 1991 -- two years at St. John School in Russellville, and four years each at St. Joseph School in Paris and St. Boniface School in Fort Smith.

Sister Delores Vincent worked at St. Joseph Daycare Center from 1991 to 1998 and remained there after the center closed. With Sister Vivian Luyet, OSB, she managed the building, which still hosted retreats and other group events. During the day she worked with religious education and senior adults at St. Mary Church in North Little Rock.

After the Benedictines left St. Joseph in 2007, Sister Delores Vincent returned to the monastery, where she does many behind-the-scenes tasks that keep things running smoothly for all the sisters, including all the grocery shopping and chauffeuring of elderly sisters to their medical appointments.

"I was very sad when St. Joseph"s had to close," she said, "but I firmly believe that St. Joseph is going to see that something goes in there that"s beneficial to the community."

Her advice to young women discerning a call to religious life is to "Keep your ears and your heart open. Listen to the Spirit to see where you are being led. It"s not easy, but just be open."

Click for the Vocations 2012: Counting the wealth that matters index