His parents' example and sister's death were pastor's inspirations 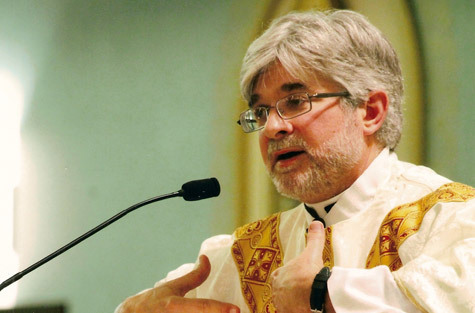 In the 1980s, becoming a priest seemed almost impossible for Father John Marconi because it meant speaking in public.

"I had a lot of fears about getting up in front of people. I was known as a fainter ... I was even known to faint in the barber's chair," Father Marconi said, adding the sight of blood or someone in pain could also make him "pass out."

While attending Holy Trinity Seminary in Irving, Texas, Father Marconi said he practiced for two weeks on his first sermon, but the congregation only heard the words, "Paul's Letter for First Corinthians."

"I froze up ... (but) I knew (becoming a priest) was what God wanted me to do with my life," Father Marconi said, adding he received counseling to handle his anxiety. "Little by little, the Lord has freed me from that particular anxiety. In 25 years, I've not fainted one time."

The pastor of St. Joseph Church in Conway celebrated his silver jubilee Feb. 21.

"My main goal is to just be a good priest," Father Marconi said. "I've been blessed to have wonderful examples."

Growing up the oldest of seven children in Crawfordsville, Father Marconi attended Catholic schools and watched his parents volunteer in church.

"Dad was a farmer. Obviously farming and gardening was a big part of his life and church just kind of flowed into that part of life," Father Marconi said. "He was always involved so it was by example really how he lived the faith."

After trying his hand at several majors at the University of Arkansas at Fayetteville, Father Marconi earned a business degree in finance in 1980. However, he said during that last year in college is when he truly started listening to God's call.

"I started praying that last year, 'What am I here for ... what is the plan you have for me?,'" Father Marconi said.

After Father Marconi's sister died in a car accident in April 1980, he said he started to search more deeply into "faith and the Kingdom" and joined the seminary in August 1981.

Father Marconi said he has carried the Bible verse on his ordination cards -- 2 Corinthians 4:7 -- throughout his priesthood: "Yet we who have this spiritual treasure are like common clay pots, in order to show that the supreme power belongs to God, not to us."

"That really struck me when I was being ordained and I've kind of lived that ever since," Father Marconi said. "That's God's love, he transformed us and changed us."

Father Marconi said he's experienced spiritual growth from the Charismatic and Cursillo movements, as well as becoming pastor at St. Joseph in June 2010.

"We're not called to be stagnant in our faith," Father Marconi said. "(God) is a good and loving shepherd. He doesn't ever call us into something where he won't be there for us."

His brother, Father Joseph Marconi, pastor at St. Thomas Aquinas University Parish in Fayetteville, said his older brother was the "strong authoritarian type" and was afraid he'd be "Sergeant Carter as a priest," referring to the drill sergeant in the 1960s television show "Gomer Pyle, U.S.M.C."

"He turned out quite the opposite. He's a loving priest, loves children ... he just loves being with people," Father Joseph Marconi said. "He's the type of guy like St. Joseph, he will throw himself under the bus to protect others."

The greatest blessings Father Marconi said he's had as a priest is introducing people to the sacraments.

"I'm going to have to say the joy I have right now is praying with people," Father Marconi said. "(When) God begins to reveal himself to people and to see how God is working and changing their life and to know you had a small part to play in that, it doesn't get any better than that."