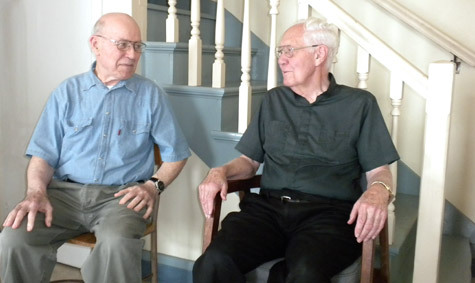 Father Peter Sharum, OSB, who celebrated his 60th anniversary as a priest on May 31, talks with Brother Matthew O'Meara, OSB, in Subiaco Abbey's health center. The priest retired as a pastor in Charleston in 2010.

Father Peter Sharum, OSB, who celebrated his 60th anniversary as a priest on May 31, talks with Brother Matthew O'Meara, OSB, in Subiaco Abbey's health center. The priest retired as a pastor in Charleston in 2010.

Father Sharum, 85, was born in Fort Smith the ninth child of 10 children and was christened Paul William. He attended St. Boniface School and St. Anne Academy and came to Subiaco Academy for his senior year, graduating with the class of 1945.

He entered Subiaco Abbey, professing his vows as a monk on Sept. 16, 1947, receiving the name Peter. During his early years in the monastery, he was sacristan, and during the summer months he was in charge of the abbey's canning operation and maintenance of the abbey cemetery. On May 31, 1952, he was ordained to the priesthood by Bishop Albert L. Fletcher at the Cathedral of St. Andrew in Little Rock.

Following his ordination, Father Sharum was on the faculty of Subiaco Academy where he taught English, history and religion. On weekends he assisted at Christ the King Parish in Fort Smith. His next appointment came in 1954 as pastor of St. Anthony Parish in Ratcliff and Our Lady of the Assumption Parish in Booneville while remaining on the faculty of the academy.

In 1955 Father Sharum was assigned as spiritual director of academy students as well as a classroom teacher. In 1957 he was once again appointed pastor of the parishes in Ratcliff and Booneville as well as serving a six-month chaplaincy at the State Tuberculosis Sanatorium in Booneville. In 1958 he became the assistant director of the abbey's clerics and novices.

The following year he ministered for three months in the mission parishes of St. Scholastica in Shoal Creek and St. Meinrad in Prairie View. In April 1959 he was appointed pastor of his home parish, St. Boniface in Fort Smith. In 1962 he was named pastor of St. Joseph Church in Paris. Two years later he returned to Subiaco to become pastor of St. Benedict Parish. It was during his pastorate that the new parish school and rectory were constructed. In 1975 he was named pastor of Sacred Heart Parish in Charleston. During his pastorate the new Sacred Heart rectory was built. By 1983 his next assignment was the pastorate of St. Edward Parish in Little Rock where he served until May 1990.

He then received his first and only assignment out of state, becoming Subiaco Abbey's last Benedictine pastor of St. Mary Church in Windthorst, Texas. Because of the shortage of priests, Subiaco Abbey voted to withdraw permanently from the Texas parish even though it had been staffed by Subiaco Benedictines for nearly a hundred years.

Returning to Arkansas in 1992, Father Sharum was immediately assigned to Sacred Heart Parish in Charleston where he had previously served from 1975 to 1983. He was instrumental in establishing the Knights of Columbus Council in 2001. The following year he celebrated his golden jubilee of priesthood. Addressing the parishioners on the occasion, Father Sharum said, "I'm starting on my second 50 years and I hope it doesn't go any faster than the first."

He told Arkansas Catholic in 2010 that he has always loved seeing young families at Mass.

"Children belong on their parents' knees at Mass," he said, "because God expects parents to guide their children, that's what they're here for to begin with."

While in Texas, he started giving children their own special bulletins with a piece of candy inside, a practice he continued until his retirement.

"All the people really enjoyed seeing the little tykes, some crawling up the step with hands up," he said.

After 26 years at Sacred Heart Parish in Charleston, Father Sharum retired to the abbey's health center in September 2010.