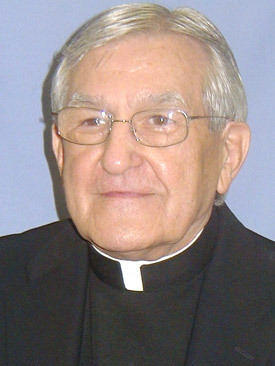 "God gave me the grace to stick it out for the last 50 years. I'm grateful for that," said Father Robert Dienert.

"God gave me the grace to stick it out for the last 50 years. I'm grateful for that," said Father Robert Dienert.

In 1956, Father Robert Dienert came to Arkansas and St. John Home Mission Seminary in Little Rock to follow his calling to the priesthood, even though he knew little about the state.

He first felt his calling in fourth grade when his class was studying the Bible and the story of God calling Samuel in the night (1 Samuel 3:1-10).

"I don't understand how it's been 50 years. It's like a birthday, you don't feel any older, you just get older. I think back on my years. Like all of us we have our ups and downs, but I enjoyed the priesthood," he said. "I'm really happy in the priesthood. I appreciate the gift of the priesthood. I enjoyed every minute of it."

His childhood was wrought with turmoil, as his family weathered tragedies and natural disasters. His mother, Nellie, lost her first child accidentally and then his father died. Father Dienert was so young that he never knew him.

He went to live with his great aunt and uncle, and their eight children for six years. He considers them his brothers and sisters. His two living cousins visited him June 19 for his jubilee.

"I feel very close to my aunt and uncle and their children. I bonded with them. I had a very hard time adjusting when I had to leave them, but eventually it worked out OK," he said.

His mother eventually remarried and he lived with her and his stepfather, Clyde Butler.

"He was a good man. He took care of me and mother," he said.

In that first year he was back, they lost everything in the Johnstown Flood (known as the St. Patrick's Day Flood and the Great Pittsburg Flood). He went to live with his grandmother until his parents got on their feet again.

In the fifth grade, they moved to Detroit, as Butler had trouble finding work in Pennsylvania as a wallpaper hanger and painter.

Family had a deep influence on Father Dienert's faith and vocation.

"My family was important to me. I was so impressed by my uncles and godfather in the way they prayed. They were fairly religious people. Most of my family was religious, participating in church stuff and all that," he said.

His stepfather was baptized Catholic, but not raised in the faith. He came back to the Church before Father Dienert's ordination.

He was a little older than the other seminarians, having entered the service from 1953-1955 after leaving seminary studies in Illinois. He decided to return to the seminary and his assistant pastor recommended he go to Little Rock. "Where is Little Rock?" Father Dienert wondered.

In September 1956, he boarded a plane in Detroit braving the chilly temperatures there in a black wool suit and heavy black overcoat. When he landed in Little Rock, it was 95 degrees.

He and two other seminarians got a cab and asked him to take them to St. John Seminary. He took them to the iron gates of Mount St. Mary Academy in Little Rock. A postman directed the cab driver to the location of the seminary.

As they drove through the gates of St. John, he said the driver exclaimed, "Lordy, I never knew there was a castle up here."

He soon became used to Arkansas weather, returning to Detroit wearing a T-shirt later that December.

He along with six others were ordained May 31, 1962, at the Cathedral of St. Andrew in Little Rock by Bishop Albert L. Fletcher.

His stepfather died in 1967 of a heart attack. In 1975, he brought his mother to live with him in Arkansas where she helped as his housekeeper. She lived with him until her death in 2008.

He's served at churches in the four corners of the state, including Pine Bluff, Texarkana, Fayetteville, Jonesboro, Camden, Clinton, Fairfield Bay, Berryville, Eureka Springs, Saint Vincent and Little Rock. He retired in March 2010 from Immaculate Heart of Mary Church in North Little Rock (Marche) after an illness made it impossible for him to continue as pastor.

"God gave me the grace to stick it out for the last 50 years. I'm grateful for that," he said.

He was sick for quite some time and found out he had kidney failure. He went on dialysis. He prayed to Blessed Pope John Paul II to help him and "give him a little break."

He came down with an infection in his belly and peritoneum and was hospitalized. A week later, the doctor told him he no longer needed dialysis.

"I'm doing well now. I'm getting stronger each day. I continue to pray to John Paul. Since that time, so many people have been calling and asking me to pray for them. I keep telling them to get John Paul to intercede for them. He gave me a boost and I think he'll give you one too. John Paul is a real patron of mine."

Click here to see the index of stories in Arkansas Catholic's jubilee series.