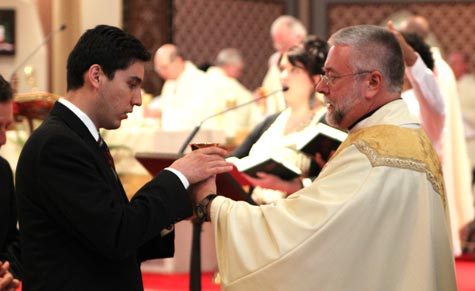 Phyllis Hemann
Father Mark Wood offers the Communion cup to diocesan seminarian David Aguilar Ávila June 19 during the Mass of thanksgiving for priests celebrating jubilees in 2012 at the Cathedral of St. Andrew in Little Rock.

Phyllis Hemann
Father Mark Wood offers the Communion cup to diocesan seminarian David Aguilar Ávila June 19 during the Mass of thanksgiving for priests celebrating jubilees in 2012 at the Cathedral of St. Andrew in Little Rock.

Father Mark Wood never considered being a Baptist preacher, but after his conversion to Catholicism as a teenager, he heard the call to the priesthood.

He now sees the hand of the Holy Spirit in his path to the priesthood, as it was a path he never could have foretold when thinking about his future as a teenager.

He grew up with a Protestant background -- Southern Baptist and Church of Christ -- and had little knowledge of the Catholic faith.

His family moved so much, as his dad served in the Air Force, that being a part of a permanent church congregation was difficult.

He was born Nov. 4, 1959, in Smyrna, Tenn., the first child of Dennis and Sue Wood. His brother Bryan rounded out his family. After Tennessee, his family lived in Georgia, Texas, Arizona, Florida, Alaska and Alabama.

In high school in Birmingham, Ala., he was invited by Catholic student to attend a Search retreat. He went because they were becoming friends, but he had not been to church in several years.

"God used the friendship," Father Wood said. "The way God touched me in that was that all these Catholic teenagers over the course of the weekend would get up and give witness talks about what their faith meant to them. By the end of the weekend, I remember thinking I want what they've got. That made me really believe in God again."

It wasn't time for him to become Catholic yet, Father Wood said.

"It's like God wanted me to go back to the Baptist church and be a strong Baptist for the first time," he said.

He returned to his Baptist roots and became "super active" for about a year and a half.

"Slowly this idea began to come to me, it was like this voice saying 'that's good as far as you've gone, but you must go further; you're not home yet."

As a bit of a history buff, Father Wood said, he began studying the origins of other Christian denominations. It became clear to him that the Catholic Church was the original Church that Christ established.

He returned to the priest who was at the Search weekend he attended, and he met with him periodically to learn. At the time, they didn't have a formal RCIA program.

In spring 1978, Father Wood joined the Catholic Church. His parents supported him in whatever made him happy, but some of his other relatives were against it.

They didn't understand Catholicism and had many misconceptions of it.

That summer as he was preparing to go to college at the University of Arkansas, the only thing that he knew about Arkansas was the Razorbacks. He became active at St. Thomas Aquinas University Parish, headed at the time by Father Joe Pallo, and continued to think about being a priest.

His parents also became Catholic while he was in college. When he graduated from college, he decided to apply to the seminary.

"It was a thought that never went away. I knew I had to at least to apply to the seminary or I would always regret it. All through the seminary that attraction to the priesthood kept growing stronger," he said.

He was ordained June 20, 1987, by Bishop Andrew J. McDonald at the Cathedral of St. Andrew in Little Rock. He served at churches in Engleberg, Corning, Noble, Fayetteville, Little Rock, Mountain Home, Weiner and Marked Tree.

"If you ever told me when I was a kid that I would grow up to be a Catholic, a priest and in Arkansas -- a place I'd never been to -- and spend most of your working time speaking (the Spanish) language that you're still learning. You might as well told me that I was going to live on the moon one day. The only way that makes any sense at all is it's God. It is incredibly humbling that he chose me to do all that."