At age 93 with 60 years as a priest, Father Milton Lange is grateful for blessed life 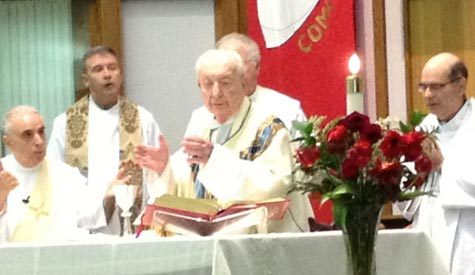 Patricia May
Father Milton Lange celebrates Mass at St. Raphael Church in Springdale June 1 to mark the 60th anniversary of his ordination. He twice served as pastor of St. Raphael and has continued to live in Springdale since retiring.

Patricia May
Father Milton Lange celebrates Mass at St. Raphael Church in Springdale June 1 to mark the 60th anniversary of his ordination. He twice served as pastor of St. Raphael and has continued to live in Springdale since retiring.

"God has been good to me. I can't complain. God has been very good to me," he said. "I just wish other people would have as good a life as I've had."

Other people should be so blessed. Father Lange recently celebrated an occasion few priests are lucky enough to observe: the 60th anniversary of his ordination. Officially retired since 1996, the priest remains a familiar presence in northwest Arkansas parishes. He celebrates the 7 a.m. Sunday Mass and hears Saturday morning confessions at St. Raphael Church in Springdale and helps out occasionally with the weekly Latin Mass at St. Joseph Church in Tontitown.

He's a ham radio operator, has a garden and cooks all his own meals -- when he's not dining out. Remarkable? Did we mention Father Lange is the oldest diocesan priest, turning 93 July 1?

Age hasn't slowed him down although a few health problems have. One knee has a tendency to lock so he walks with the assistance of "George," as he's nicknamed his cane. He spent last summer recuperating from a heart attack and wears a mask at night to force oxygen into his lungs.

But he talks with the energy and force of a much younger man and is delighted at the way his life has turned out.

"Looking back, wherever I've been and whatever I've done, I've enjoyed."

A Milwaukee native, Father Lange attended college with a draft deferment. As the only son, Father Lange knew he might become the family breadwinner at any time because his father was always in precarious health. After completing a degree in chemical engineering, the future priest went to the Pine Bluff Arsenal, making mustard gas.

"It's a good start, isn't it?" he quipped at the June 1 Mass celebrating his ordination anniversary.

After World War II, the young engineer worked for the Cotton Belt Railroad. He liked the work but something was missing -- he didn't belong any more. Within a few months, he was accepted at St. John Seminary in Little Rock and was ordained on May 30, 1952, at the age of 32. Upon entering the seminary, he began teaching math and science courses at Catholic High School and continued until 1966 when he was assigned to St. Jude Parish in Jacksonville. There, he helped the parish transform a Presbyterian church building into a more Catholic setting.

"I stole a couple of rooms from the education wing. One was my bedroom and one was my living room. My kitchen was the parish kitchen," Father Lange recalled.

He designed the altar and with assistance of parishioners built a confessional.

"I had to ask the bishop how to get here," he laughed.

He'd been hard at work in Jacksonville and hadn't scouted the diocese to see what parishes might be future assignments.

Pastor Father John Connell gave the homily at the anniversary Mass. He asked the older man what he liked least about being a priest. "He told me, 'Nothing.' ... He is a humble and holy man."

Father Lange is adamant. "I have never been happier. These have been the happiest years of my life."