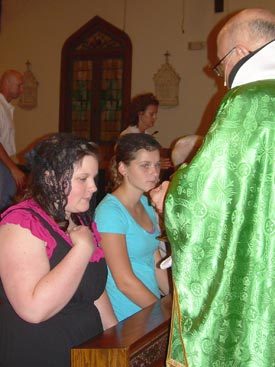 Opportunities to attend Mass in Latin are increasing around the state.

At least five priests now celebrate the traditional Tridentine Mass regularly in six parishes in the Diocese of Little Rock and, in some cases, they've begun offering other sacraments, including baptisms, in the ancient language as well.

Father Greg Hart, who has been celebrating the Tridentine Mass at Tontitown's St. Joseph Church since February 2011, has had at least two baptisms in Latin recently.

Father Charles Ryan, who celebrates the Latin Mass daily at St. Patrick Church in North Little Rock, estimates he's done eight or nine baptisms and one wedding in the year he's been in Arkansas. He also offers the sacrament of reconciliation before each Mass.

Father Ryan is a member of the Priestly Fraternity of St. Peter, often referred to as FSSP as an abbreviation for the order's Latin name, Fraternitas Sacerdotalis Sancti Petri. He is not a diocesan priest but is assigned by his order to offer Mass in the Tridentine rite. Worshippers attending his Masses are using the facilities of St. Patrick but are members of the St. John the Baptist Latin Mass Community.

Father Ryan said his order sends its members to places they're invited. The bishop of Little Rock invited the order to send a priest to the state and there's been at least one priest and sometimes two priests in Arkansas for the past 19 years.

When the order came to Arkansas in 1993, Mass was only celebrated in the Little Rock area and Cherokee Village, but expanded later to Mountain Home. Only FSSP priests celebrated the Mass. Since 2007 when Pope Benedict XVI lifted most of the restrictions on the celebration of the extraordinary form of the Roman rite, Mass in Latin has expanded to new cities, including Tontitown, El Dorado and Batesville.

As for Mass, Father Ryan explained it's not just the language that's different; it's the rite. To call the celebration "the Latin Mass" isn't specific enough. The form of the Mass that's being celebrated in Latin in an increasing number of parishes in Arkansas is the "old Mass," also referred to as the Tridentine Mass. Pope Benedict XVI has called it the "extraordinary form" of the Mass, he noted.

It's a "devoted crowd" who seems drawn to the Tridentine rite, Father Ryan said, and they're often willing to travel some distance to attend. People come from Conway and other communities in the area to attend the Latin Masses at St. Patrick. Daily Mass is celebrated seven days a week.

When other sacraments are offered in Latin, it's actually a combination of languages so those taking part can respond. At baptisms, for example, the godparents' responses are in English and for confessions, only the absolution is in Latin. People confess in their own language. Couples who ask to be married in the Tridentine rite would still attend Pre-Cana classes in their native language, Father Ryan said.

"They are coming from Missouri, Mountain Home ... even Jonesboro for that Mass," he said.

It might seem quite a distance but then, "These are the same people who have been driving from Cherokee Village to North Little Rock for their Masses, so they're used to driving from there."

For St. Michael Church in Cherokee Village, it's a resumption of the Tridentine Mass. St. Pio de Pietrelcina Latin Mass Community was established there in 2009 but the community lost its priest last November.

Father Bass said he was surprised by the demographics.

"The strange thing is I was expecting it to be mostly old people, people who remember the Mass from years ago and have an affection for it. [But] it's primarily younger people," he said. "The first Mass I went to at St. Patrick's, most of the people were younger than me. They couldn't possibly remember it."

Holy Redeemer Church in El Dorado began offering Latin Mass on the first Sunday of Lent. An average of 50 parishioners celebrate the Mass on Saturdays at the 5 p.m. vigil.

After clearing it with Bishop Anthony B. Taylor, Father Gregory said he went for the appropriate training in Chicago and St. Louis in 2011.

It had been many years since he last took Latin as a high school student at Subiaco Academy, so the transition from English was a formidable challenge. He said he sometimes falls back on his "cheat sheet."

Why does the Tridentine Mass appeal to certain parishioners?

"Some parishioners are looking for greater reverence in their celebration of the Eucharist," Father Gregory said.

Interested individuals are traveling from Louisiana and other places to celebrate the Latin Mass at Holy Redeemer, he said. Until this Latin Mass was offered, the nearest available was either in Shreveport, La., or Little Rock.

Keli Jacobi contributed to this article.