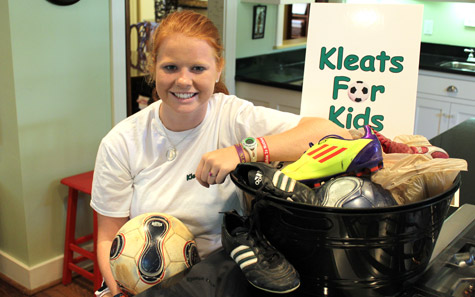 Dwain Hebda
"At one point we started counting all the stuff, but we just gave up," Madeline Whitacre said.

Dwain Hebda
"At one point we started counting all the stuff, but we just gave up," Madeline Whitacre said.

If Madeline Whitacre decided to just play soccer her last two years at Mount St. Mary Academy, it would be enough. If all she wanted to do was help the Belles' program continue to be a force on the girls high school soccer scene, perhaps culminating in a state championship, it would be just fine.

No one who has seen her play could accuse her of not leaving everything she had on the field. Certainly not her teammates, who last year voted her team captain for the junior varsity. Not her teachers at the Little Rock all-girls college preparatory school, given she maintains a 3.57 grade point average and has twice received scholar athlete and honor roll distinction.

Not her church community at Our Lady of the Holy Souls Church, where she serves as an altar server, tutors elementary children at Holy Souls School and through a summer academic camp. And absolutely not the athletes who get to discover the joys of soccer thanks to her participation as a volunteer coach in The Outreach Program for Soccer (TOPS), a program for special needs children in Little Rock.

Frankly, after everything she has brought to her church, school and community it would only be right that the world leave Whitacre alone if not for one small detail.

Madeline Whitacre isn't about to leave the world alone.

In fact, nothing short of world soccer domination will do, although not necessarily through competitive glory. Whitacre's plan for global conquest lies not with gold medals but with a stack of scuffed soccer balls, hundreds of dusty cleats and more taking up room in the family basement. It's the assembled inventory of faith and hope that is Kleats for Kids.

"I love this program," Whitacre said. "I like the fact that we are helping kids who need the help, kids who don't have a lot. It's just so cool."

Kleats for the Kids got its start in 2007 through Whitacre's older brother Michael when he was in his junior year at Catholic High School in Little Rock. A high school soccer standout himself, he launched the program as a way to get soccer shoes, uniforms, shin guards and other equipment to children in need.

"I looked around our house and saw all this soccer stuff," Michael, now 22, said. "I thought, there are thousands of kids in Arkansas playing soccer and most of them are probably in the same boat. What if all that equipment could be recycled in a positive manner around the world to children who need it?"

Michael's idea took off quickly. Email campaigns and simple word of mouth brought the local soccer community out with box after box of gear. As Catholic High bought new uniforms, the outgoing jerseys and shorts as well as donated cleats and shin guards wound up in Nicaragua.

A second shipment of gear, 50 uniforms from Michael's club team program and other donated items, reached schools in Rwanda. A third request, this time from a former Little Rock club coach who was being deployed to Iraq, put equipment in that country. Michael made inroads with Christ the King Church in Little Rock to send equipment along on a Honduran mission trip that parish was planning.

Even with all of this activity, the donations far outstripped the means to get them out of the Whitacres' basement storeroom and to the children who would use them in foreign lands. It was into this fray that then-fifth-grader Madeline stepped, captivated as she was by the global impact her big brother was making through the sport they both loved.

"I really loved what he did with the program," she said. "It's not even so much so about kids getting into competition, some of these kids don't have shoes or enough clothes to wear and if they get a jersey, at least they have a shirt whether they ever play or not."

As Michael's senior year slipped quickly toward graduation, he began to ponder the fate of his program, evaluating younger classmates for the right person to take it over after he went off to college. In hindsight, he needn't have bothered.

"I just stepped in and said, 'No way, this is staying in our family,'" Madeline said.

Once in charge of the project, she faced the same challenging equation as her brother -- gathering donations was easy, getting them to needy populations was hard. Kleats for Kids asks only for equipment donations, not cash, so shipping costs became the number one concern. Using friends and neighbors from other churches in Little Rock sponsoring mission trips helps and has helped bring donated clothes and equipment to additional outlets in Haiti, Guatemala and Colombia.

Still, the bags of shoes, soccer balls, socks and jerseys keep flowing into the Whitacre household's self-proclaimed "mini warehouse" either through the drop-off site at Go!Running, a local business, at soccer games or just on the family doorstep.

"At one point we started counting all the stuff, but we just gave up," Madeline said with a broad smile. "My goal is to get as much of what we have out of the basement."

Madeline's game plan includes seeking a grant to cover shipping costs, get in front of more local churches or to look for areas within the United States that could get the same benefit from the donation as children in other countries. She'll take a load of it herself next summer when she makes her own mission trip to Haiti with a youth group.

She tries not to think about what happens after that when, like her brother, she enters her senior year and has to address what happens to Kleats for Kids in the long term. But whatever the outcome, her energy and drive has won her one very big fan.

"I could not have forecasted the huge response that this program has received from Central Arkansas," Michael said, "and I am very proud that Madeline took the initiative and brought the energy to make this greater than I could've ever done. Her passion is soccer and to help others."