'Vocation puts order into a jumble of circumstance' 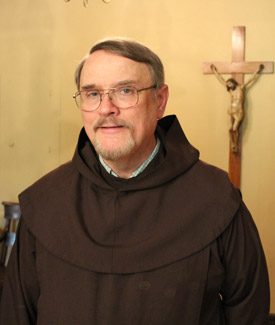 Dwain Hebda
Father John Magdalene Suenram, OCD, who is originally from Kansas, has been a Discalced Carmelite priest for 25 years. He joined the order in San Antonio in 1979 and became a priest in 1987.

Dwain Hebda
Father John Magdalene Suenram, OCD, who is originally from Kansas, has been a Discalced Carmelite priest for 25 years. He joined the order in San Antonio in 1979 and became a priest in 1987.

Though perhaps not to the degree some people may envision, monastic life is by design spartan in its trappings. As one visit to Marylake Monastery a short drive outside of Little Rock attests, everything from the modest furnishings to the spare décor speaks more of what it lacks than what it has assembled, casting off that which impedes the eye and ear from seeing and hearing God's presence.

Father John Magdalene Suenram, OCD, isn't much different. Plainspoken and quiet, his has been a 25-year journey to divine the voice of truth from the rattle of the world and pass it along to all who would hear. For some that has meant sharing an intellectual discussion on the nature of goodness and Christ's boundless love. Others have been touched by his hospitality and humility in their times of need.

"We are all called to love," he said. "Christ set us free to find our niche in life, a niche that liberates the spirit. A summary of vocations is the liberation of God's boundless love.

Two years ago Father Suenram was in a car crash that put him in a coma for six weeks of what was ultimately four months in the hospital. When he awoke, the Kansas native found himself deluged with more than 250 hand-written cards and get-well notes from the flock he had ministered to over the years. The elementary school smiling sunshines and Mass scenes drawn by pupils mingled with the reminisces from those who grew up under his instruction at Little Flower School in San Antonio. Cramming a binder where he keeps them all, the collection includes one, perhaps the most poignant of the bunch, from a fifth grader named Adrianna who wishes the Carmelite priest a merry Christmas and then reminds him,

"I love that school in San Antonio," he said, plainly. "I loved that ministry and they seemed to love me, too."

The path of vocations had presented itself early to Father Suenram, the firstborn son in a family of eight. As a student of St. Joseph School in Hutchinson, Kan., he attended a vocations fair while still a youngster.

After graduating from public high school, he enrolled at Wichita State University where he would graduate with a degree in sociology, take a counseling job in the field of juvenile corrections in Topeka and soon find himself altogether miserable.

"I didn't like my job and I had no family in the area who I was close to," he said. "It was a real low point, a point of questioning."

He sought answers in intellectual pursuits, which included reading everything from "Be Here Now" by the transcendental meditationalist Richard Alpert, to the writings of St. Teresa of Avila and St. John of the Cross. The latter's work struck to Father Suenram's core.

"(St. John's) writing was very true to me," he said. "The depth of his spirituality made me say 'Whoa, who is this guy?'"

The epiphany led him to daily Mass, additional study and shortly, to apply to Marylake for admission as a Discalced Carmelite, an application that was originally declined. The new zeal he felt for his faith proved no passing phase, however as he sought ways to share it with others around him. His persistence paid off with his becoming a novitiate in September 1979, then to seminary. He was ordained a priest in November 1987 in San Antonio.

He would spend the majority of his 25 years in Texas serving as a pastor, superior of the community and educator, the latter of which he points to as a particularly happy assignment. His face brightens when sharing stories of his teaching days.

"A true vocation puts order into a jumble of circumstance," he said. "Life is circumstantial and there are many paths one can take. It won't happen without suffering, but God is good in dealing with us all, if we only let him."

Father Suenram, 61, was reassigned to Marylake in 2007. His jubilee date will come and go quietly, he said, no doubt with the simple and solemn Mass.

"Prayer is the essential thing. So many problems in the world can't be solved any other way," he said. "God's a wonder worker."