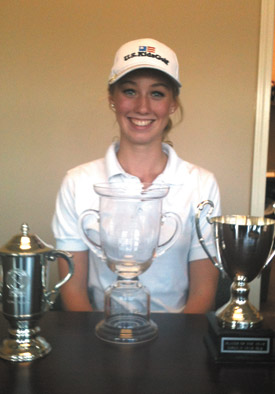 "In our foursome, my teammate, Megan Munroe of North Carolina, and I played two girls from Mexico and Venezuela. We were the fifth foursome to play, and our scores put the USA over the top."

Addison started playing golf at First Tee in Fort Smith when she was 6. Her father, Dr. Cameron Mitchell, is an avid golfer who hoped his only daughter would share his enthusiasm. As she moved through the levels of the First Tee program, graduating from their six-hole golf course to the Fiona Hills Country Club course, it became obvious that she had an exceptional talent. She started playing golf year-round in fifth grade and began playing competitively in local tournaments a year later.

Mitchell said the First Tee program helped her to develop the discipline and time management skills to maintain straight-A grades while focusing on competitive golfing.

"I learned First Tee's nine core values," she said. "Honesty, integrity, responsibility, perseverance, sportsmanship, confidence, courtesy, judgment and respect -- those things were always stressed while I was growing up."

Playing in local and regional tournaments sponsored by the Arkansas State Golf Association and USI junior golf tournaments helped her qualify for the U.S. Kids Teen World Championship team, where she met girls who had been golfing competitively for a number of years. Mitchell now works with two coaches: Mark Curette, who coaches the University of Arkansas at Fort Smith golf team, and David Lee of South Carolina.

"David Lee has a method called gravity golf," Mitchell said. "It involves swinging from the ground up and not using all your energy. I worked with him over Christmas break and for two weeks in South Carolina. It has definitely improved my game."

In the summer Mitchell plays every day, walking the course no matter how hot the weather. During the school year she goes to the driving range or putting greens when she can't fit a round of golf into her busy schedule. This fall, she is the co-captain of the Trinity True Blues dance team, cheering for the Buffaloes and enjoying some time away from the competitive spotlight. She is also active in National Junior Honor Society and in the First Baptist Church youth group in Van Buren.

"Addison is exemplary of a young woman preparing for the future while contributing to her school, church, family and community. She is quick to volunteer her time and talent and works hard to discover and reach her full potential in any venture," science teacher Judy Weisenfels said.

Looking toward the future, Mitchell said she would like to play college golf and admits, "It's always been my dream to be a professional golfer, but I know it will take a lot of work." As she traveled around the country playing in tournaments, she's had the opportunity to meet some professional golfers and even played a round with Arkansas' Stacy Lewis during the LPGA Northwest Arkansas Championship. Seeing how dedicated they are, she knows that she needs to remain focused and "practice, practice, practice."

Although she plays golf with girls, she enjoys golfing with boys because they push her "to do better." And she credits her father, a chiropractor, with helping her stay flexible and injury-free.