'The house that faith built' now open -- and full 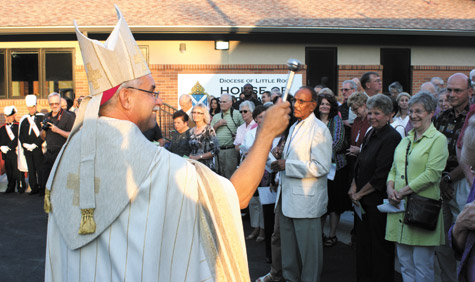 Malea Hargett
Bishop Anthony B. Taylor sprinkles those attending the House of Formation dedication Sept. 20 with holy water before blessing the inside and outside of the building in Little Rock.

Malea Hargett
Bishop Anthony B. Taylor sprinkles those attending the House of Formation dedication Sept. 20 with holy water before blessing the inside and outside of the building in Little Rock.

Seminarians studying in Little Rock and those who are discerning a vocation to the priesthood now have a permanent home.

Bishop Anthony B. Taylor dedicated a $1.6 million home on the grounds of Our Lady of Good Counsel Church in Little Rock off of 12th Street to serve as a temporary place for seminarians to live while studying at the University of Arkansas at Little Rock for additional education and to improve their English skills. Other men, called discerners, want to actively discern whether they are being called to be a priest before they enroll in the seminary and are allowed to live in the 12-bedroom house.

"This is the house that faith built," Bishop Taylor said. "It has been built with faith, by faith and to spread the faith and is being dedicated today less than a month before the beginning of the great Year of Faith called for by Pope Benedict XVI to mark the 50th anniversary of the beginning of the Second Vatican Council, which was itself the greatest faith event worldwide of our lifetime."

Even before the 6,000-square-foot building was dedicated Sept. 20, the House of Formation was already full. The house's two apartments will be used by vocations director Msgr. Scott Friend and prefect Msgr. Richard Oswald. Father Ruben Quinteros, vice prefect, will live in a student room.

"This House of Formation is an expression of our faith," Bishop Taylor said. "Pessimists said we would never fill it and yet it is full on day one. Others said we'd never pay for it, but Arkansas Catholics and the Catholic Extension Society ... cannot be outdone in generosity."

Along with Father Erik Pohlmeier, Bishop Taylor calls the four-member vocations team "expressions of faith: people who trust in Jesus and walk by faith, spreading the Good News." They will guide nine seminarians and discerners through daily Mass, prayer and communal living.

The house also includes a chapel sponsored by the Knights of Columbus state council, chapel furnishings donated by the Marks family of Little Rock and dining room sponsored by Sacred Heart of Jesus Church in Hot Springs Village. Each of the 10 student rooms with private bathrooms will be furnished similar to a dormitory with a bunk bed, shelves and desk.

A 10-foot-by-5-foot oil painting of the Last Supper is predominant in the dining room. Andrea Hathcote of Hensley, whose father John is Catholic, donated the painting to the House of Formation in the spring after learning about the construction project. Hathcote, a member of East End Baptist Church, based the images of Jesus and the apostles in the painting on people she observed at the River Market, grocery store, a friend and even a homeless man. Hathcote said the painting has been sitting in her mother's den waiting for the right place to hang.

"Lord, you know where this is supposed to go," she said she prayed after completing it in 2010.

The Diocese of Little Rock is actively seeking donors to sponsor other rooms and the furnishings. The sponsorships range from $90,000 for the kitchen/common room to $23,000 for the meeting room/library. Donors can make one-time gifts or monthly payments over several months. The diocese also has two registries set up under "Scott Friend" at Target and Bed Bath and Beyond to accept donations of linens, cookware and utensils.

Diocesan finance director Greg Wolfe said the diocese so far has received nearly half of the money to pay for the house through donations and challenge grants. Among those donating $775,000 since the fund drive was kicked off in August 2011were a $187,000 donation from the Knights of Columbus state council and $150,000 from Catholic Extension.

Wolfe said the remaining $825,000 is being funded with a loan from the Diocesan Seminarian Fund. The loan will be repaid with available funds from Catholic Arkansas Sharing Appeal over the next several years, beginning with the current 2012 campaign.

Bishop Taylor led a prayer service outside the front of the House of Formation for about 100 supporters. Following the prayer service, he blessed the inside of the building with holy water. The chapel and dining room were blessed in earlier services for members of the Knights of Columbus and Hot Springs Village church.

The seminarians and discerners who will live in the home led the rosary at the conclusion of the Sept. 20 dedication.

Seminarian Emmanuel Torres has lived in the House of Formation since 2009 while he has been working to improve his English.

"My brother seminarians say that I have a bachelor's degree in discernment," he told the crowd.

Torres said the new house will give the men more "personal space."

"It will take us apart from the world and living with the priests gives us an idea and it helps us a lot," he said. "They are like a model for us. Living here also we will help in parishes and ministries."

John Taylor of Fort Worth, nephew of Bishop Taylor, came to Arkansas in August to begin his discernment. John Taylor spent the past two years volunteering for various organizations after graduating from Texas Tech University in 2010. He said he appreciates attending daily Mass and praying with the seminarians and discerners.

"It's like a general trend across the country. If you have a space where you don't have to be fully committed, it allows you to actually (discern)," he said.

"The school is kind of an aside for me," he said of taking classes at UALR.

The concept of a House of Formation began in 2009 when Msgr. Friend saw a need for a "discernment house" to help men who were discerning a call to the priesthood, were in Little Rock for clinical pastoral education for the summer or needed intensive English classes before moving away to attend the seminary. Initially the diocese rented a home in a neighborhood. In 2011 the lease was up and the seminarians and discerners were temporarily moved to St. John Center in Little Rock.