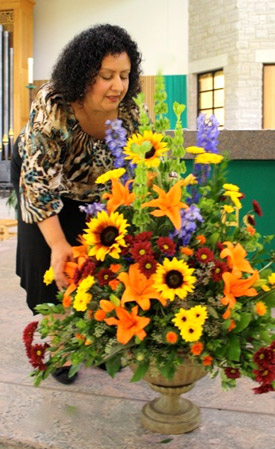 Why you want to know Rosario: After leaving California in 2006, Rosario and her family left behind a close-knit parish family to move to Rogers. What they thought might be a vacation turned in to much more. Now, six years later, the couple plans to celebrate Arturo's ordination as a permanent deacon Nov. 17. Besides her involvement in the diaconate program, Rosario also serves as a part-time sacristan, minister to the homebound and is always available to help or translate in the parish office.

The theme this year for Arkansas Catholic is "Catholic Beyond Sunday." How do you advise others to remain committed as a Catholic?
I think we all have to decide to serve, instead of being served. We just have to open our hearts to what God wants of each one of us. I want people to know that there is no ministry that is too small. Ironing the serving albs is an important ministry. The need is here. We can all do something. A commitment to do something small translates into something big.

I grew up in Durango, Mexico, and as a young child I remember attending Mass only on Sundays and special feast days. My whole family attended church, but I had never experienced a personal retreat or been involved in the church beyond that. But, I do remember being chosen to be Our Lady of Guadalupe when I was 8, 9 and 10 years old. During the feast day, I would be in the procession that would go through the plaza of the town and end at the church. I believe that began my special love of the Blessed Mother.

Tell us about your journey here and your faith journey.
When I was 20 years old, I came to the United States to live with my grandmother and my aunts in Laverne, Calif. My grandmother paid for my trip here and shortly after, I began to apply for residency and my citizenship while working on a citrus farm and in a factory. I became involved at Holy Name of Mary Catholic Church where I later became a housekeeper for the three priests of that parish. During this time, I also met Arturo and we dated for two years before marrying. I was involved as a lector, and he became involved in the choir ministry and a charismatic prayer group.

There have been many challenges that you have faced, such as language and education, yet you and your husband have remained devout.
At times it has been difficult, especially when we entered the diaconate program. There is a lot of theology, and I finished only through my junior year in high school. So I had to study much more to understand all of the material. Also, the children were still young when we began the program, and it was hard to leave them when we would travel to Little Rock for the weekend classes. But I had to trust God and pray that I was leaving them in his hands. During this time, too, my parents became very ill, and I had to return to Mexico for a short time to care for them. Entering the diaconate has been a great blessing and opportunity to grow in our faith. I know we will experience a big change in our lives after he is ordained as a deacon.