Refugees give cause for concern 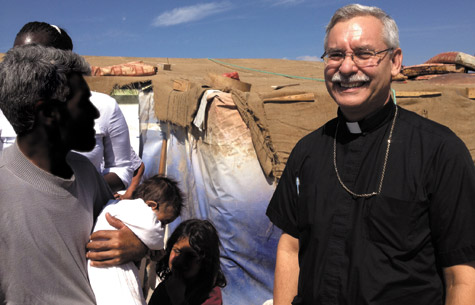 Bishop Anthony B. Taylor greets refugees Oct. 12 during his visit to Lebanon. Bishop Taylor spent two weeks in the Middle East visiting Syrian refugees who have been displaced to Lebanon, Turkey and Jordan.

Bishop Anthony B. Taylor greets refugees Oct. 12 during his visit to Lebanon. Bishop Taylor spent two weeks in the Middle East visiting Syrian refugees who have been displaced to Lebanon, Turkey and Jordan.

Bishop Anthony B. Taylor is concerned about immigration problems in the United States, but he has more insight now into the injustices happening to refugees around the world.

Bishop Taylor, a member of the U.S. bishops' Committee on Migration, led a fact-finding mission to Egypt, Lebanon, Jordan and Turkey Oct. 7-20 to learn about the worsening conditions for Syrian refugees. He was joined by Holy Cross Father Daniel Groody, associate professor of theology at the University of Notre Dame and consultant to the USCCB Committee on Migration, and four USCCB Migration and Refugee Services employees -- Anastasia Brown, director of refugee resettlement, Beth Englander, director of special programs/populations; Natalina Malwal, transportation specialist for processing operations; and Kevin Appleby, director of migration policy and public affairs.

In a press conference Nov. 1, Bishop Taylor and members of a USCCB delegation urged for more international support for Syrian refugees in the region.

The civil war in Syria erupted in March 2011 when rebels attempted to overthrow President Bashar al-Assad. According to the United Nation's High Commissioner for Refugees, the outflow of Syrians could reach 750,000 by December and as many as 1.5 million by the end of 2013. Neighboring countries told the delegation that services to the refugees could be cut back or the refugee flow limited without more support from the international community.

"Without more international support, the humanitarian situation, both inside and outside Syria, could reach a breaking point in the not-so-distant future," Bishop Taylor said. "The international community, led by the United States, must do more to provide assistance to the refugees in order to avert a humanitarian crisis," he added.

Brown emphasized that many refugees who have not registered with the United Nations and are hiding in local communities are particularly at risk.

"Although much attention is rightly being paid to the refugees in camp settings, those living in local communities are falling through the cracks," she said. "As they are spending down their resources, their needs are increasing and the services to date are insufficient."

The delegation also expressed concern about specific groups fleeing the violence, including Syrian Christians and other religious minorities and Iraqi refugees residing in Syria.

"There is great fear among the Syrian Christians, who are caught in the middle of the conflict and are concerned that their community will become targets of the violence. In fact, we heard many stories of Christians being threatened, a precursor to the sectarian violence which emerged during the Iraq war," Bishop Taylor said.

Englander, who oversees services to trafficking victims and unaccompanied children for USCCB, cited the vulnerability of refugee women with children, the majority of the Syrian refugee population.

"Many of the men are remaining in Syria to protect their property, to work or to fight," she said. "Women with children are left to make it to safety on their own and become vulnerable to exploitation and abuse."

The delegation also visited Egypt and detailed stories of African refugees experiencing trafficking and torture in the Sinai desert. Appleby said the U.S. and Egyptian governments must work together to rescue these victims and halt the atrocities.

"If our nation is going to claim leadership in ending the scourge of trafficking, then we should show leadership and end the torture and trafficking occurring in the Sinai desert."

Bishop Taylor traveled to the Dominican Republic and Haiti May 28-30 to participate in a regional consultation of the representatives of the Episcopal Conferences of the United States, Mexico, Central America and the Caribbean. Bishop Taylor attended as a representative of the U.S. bishops.

The meeting focused on current conditions impacting migration in sending and receiving countries; the treatment of immigrants living in or in transit through their countries; the impact on communities left behind; and the implications of these realities on the Church's pastoral care, advocacy and public policy, and service responses. In 2011, Bishop Taylor joined the consultation that was held in San Jose, Costa Rica.

"I went to Dajabón on the Dominican Republic side of the border and Ouaneminthe on the Hatian side," Bishop Taylor said of his May trip. "The river that separates the two countries there is called el Río del Masacre (Massacre River) because it was there that the Dominican dictator Trujillo ordered the execution of a large number of undocumented Haitians present in the Dominican Republic, throwing their bodies into the river -- fouling the river for many miles until it emptied into the ocean on the north coast of the island.

"The poverty there, especially on the Haitian side, is beyond the power of words to describe. I celebrated Mass there twice and was interviewed by the local radio station.

"Then we went to a 'batey' (sugar cane plantation) where the people live as slaves in every respect, except that slavery is technically illegal in the Dominican Republic. All the cane workers are undocumented workers from Haiti."

There Bishop Taylor said he witnessed much "misery and hopelessness."