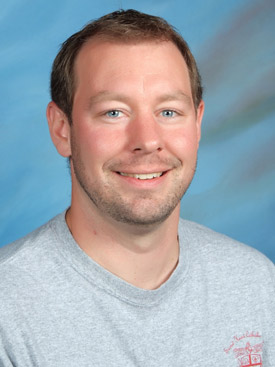 "As a new coach, I made a lot of mistakes, but I'd look at them and say, 'Well, we can't do that again,'" said Aaron Duvall of Sacred Heart School in Morrilton.

"As a new coach, I made a lot of mistakes, but I'd look at them and say, 'Well, we can't do that again,'" said Aaron Duvall of Sacred Heart School in Morrilton.

If ever there was an unlikely success story, it is Aaron Duvall and the Sacred Heart High School boys' basketball team.

Duvall played for the Rebels in both baseball and basketball, posting a solid if undistinguished career there. During these years, he had an early influence in his father who was a volunteer coach with the Sacred Heart baseball program since Aaron was in middle school. This created a call to coach that was so strong, the 32-year-old Duvall ditched his possible legal career after just one class at the University of Central Arkansas in Conway, opting instead to follow his heart.

"I knew I wanted to work in the schools and I thought, what better way to do that than to coach?' he said.

Duvall, a member of Sacred Heart Church, represents the third generation on the mother's side of his family to graduate from the school, but he never anticipated returning after graduating in 1998.

"I didn't think I'd ever come back to Sacred Heart because back then, I didn't want to come back," he said. "There were just too many people here that I knew and that knew me."

Instead, Duvall took his first coaching job with Lutheran High School in Little Rock, one that gave him head coaching authority over the boys' basketball and baseball programs as well as assistant coach to the football team.

"It was a low-pressure job," he said. "It was neat to be able to build a program from the ground up."

"Building" is something of an understatement. Duvall took over just as the school was entering the Arkansas High School Activities Association. As most expected, the initial results weren't pretty as both coach and team endured the growing pains of competing in a league that placed them in a division against much larger schools thanks to a complicated seeding system.

"As a new coach, I made a lot of mistakes," he said, "but I'd look at them and say, 'Well, we can't do that again.' The best thing about those Lutheran teams was they had a real desire to win. They knew we were outmanned every single game, and they still played very hard."

By Duvall's third year as the boys' ninth-12th-grade basketball coach, the program began to mature. When the league reclassified the school from 4A to 2A, thus pitting the school against opponents of comparable size, the hard lessons of the previous two seasons paid off with 17 wins and a trip to regionals that came just one game shy of the state tournament. For the next four years, Duvall was too busy living his dream every day to think much about returning home to Morrilton.

"I was happy at Lutheran," he said, simply.

Coaches learn to deal with job instability, particularly at the higher echelon of any sport. As it turned out, Duvall was no different and by 2009 he was out of a job when the school closed in the face of shrinking enrollment. Now a new father and unemployed, he got the call from his alma mater. A much more confident and experienced Duvall answered, listened and accepted the offer to be an English teacher and seventh-12th-grade boys basketball and baseball coach.

Walking through the halls for the first day was at once surreal and comfortable.

"I knew those halls, but I didn't know any of those kids," he said. "But they had heard that I graduated from there and so most of them were like, 'He's one of us.'"

On the court, Duvall found his players did not invest their trust quite so immediately. The Rebels program had cycled through seven coaches in seven seasons, including him, and players were wary of the new man in charge. Still, the squad posted a 20-17 mark that first season, took second in the conference, won the regional tournament for the first time in school history and made it to the second round at state.

Sacred Heart followed that up with an even more impressive 34-9 record last year and a second-place finish in the state tournament, losing to Mammoth Springs in the final by a mere three points. The kid who never played a minute of state tournament basketball had brought his alma mater within an eyelash of winning it all.

This year's season dawned with fresh challenges and skyrocketing expectations. Duvall tries to push his team higher while dosing his fans with reality. As last spring's graduation took its share of talent out from under him, Duvall is left with a 2012 squad that is long on hunger and grit, but relatively short on experience. It's the kind of squad any coach would love.

"I don't know how good we can be yet, but I love their desire to be great," he said. "We have a long way to go. It's like I tell the boys, you don't win state in October."