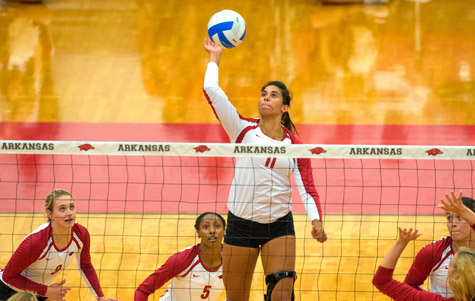 University of Arkansas / Walt Beazley
Janaliss Torres-Lopez said, "(God) sees my struggles, he knew when I was homesick and I just wanted to give up. Any time I wanted to feel close to him I went to church. I believe he is the reason I was able to come here and succeed."

University of Arkansas / Walt Beazley
Janaliss Torres-Lopez said, "(God) sees my struggles, he knew when I was homesick and I just wanted to give up. Any time I wanted to feel close to him I went to church. I believe he is the reason I was able to come here and succeed."

When Janaliss Torres-Lopez arrived in Fayetteville four years ago, she shared the same anticipation -- mingled with a little fear -- as any other college freshman. That is, with the notable exception of being nearly 2,100 miles from home and the only Puerto Rican player on the Razorback volleyball squad.

"I was pretty much alone here," she said. "I didn't speak a lot of English. Even the food was different."

Torres-Lopez soon discovered American cuisine wasn't the only thing to get used to. So was Division I volleyball, faster and more sophisticated than what she grew up playing. Every practice became a crash course, every game a clinic.

"There were times I just wanted to go home," she said. "But somehow I just kept focused. If you're not mentally prepared, you won't be able to make it."

Looking back, she said two things got her through that first year: the occasional visit home and St. Vincent de Paul Church in Rogers. It was there she recharged within her faith, particularly during Mass celebrated in Spanish.

"God's the reason I'm here," she said. "He sees my struggles, he knew when I was homesick and I just wanted to give up. Any time I wanted to feel close to him I went to church. I believe he is the reason I was able to come here and succeed."

Sophomore year proved a lot easier for Torres-Lopez, thanks in large part to the arrival of Raymariely Santos, another Puerto Rican recruit. The two players immediately bonded.

"It was always my goal to come to the states, ever since I was in fifth or sixth grade," Santos said. "I've never regretted my decision to come here, but when it first hit me, I was still a little homesick. It's been a lot easier having (Torres-Lopez) here."

Except for their roles on the court -- the 5-foot, 11-inch Santos plays setter while the 6-foot Torres-Lopez plays middle blocker -- the two took practically identical paths to Fayetteville. Both got into volleyball at age 11 after tiring of basketball. Both have athletic lineage: Torres-Lopez' father and Santos' mother are former professional basketball players and Santos' father and uncle coached the sport in the Puerto Rican pro league. Both made the Puerto Rican Junior National Team -- though not at the same time -- hopping from one international meet to the next in the summertime.

Girls' sports continue to evolve slowly in Puerto Rico, due in part to the lack of funding and expertise in the public school system. This led the two athletes' parents to seek private institutions for their academic and athletic development. Torres-Lopez attended Guamani Private School and Santos went to Colegio Sagrado Corazon de Jesus (Sacred Heart of Jesus College).

Their schools enjoyed a spirited rivalry. In three head-to-head meetings at the equivalent of a state championship, Torres-Lopez beat Santos twice.

"I'm really competitive and if we play against each other, I'm going to do everything to beat you," Santos said. "But when we both got to Arkansas, we got along with one another really well."

Gradually, home didn't seem quite so far away. The common athletic and cultural heritage gave Santos someone who helped navigate the channels of American life and Torres-Lopez got someone to yap at during practice, a habit her more reserved American teammates hadn't developed a taste for.

"People here are really calm, I'm always yelling," Torres-Lopez said, "The refs sometimes get mad at me, but I can't help it. I was born with that fight in me."

Their mutual support system also benefited their play. In 2010, Torres-Lopez started 21 of the matches in which she appeared, setting career marks for kills and blocks in the process. Santos started 14 matches and appeared in all but one of the team's outings en route to three Freshman of the Week awards and a spot on the Southeast Conference All-Freshman Team.

Still, athletic success doesn't erase distance. Like her adopted older sister, Santos found St. Vincent de Paul a comforting place, somewhere she could reinforce the faith that was as familiar here as home.

"My faith in God is really strong," she said. "He has given me the opportunity to follow my dream. There have been so many times I have just had to leave everything in his hands. I know if I don't get something right now it's because he knows it's not the appropriate time and there is something better waiting for me."

Over the next two seasons, the team showed steady improvement. Last year, the Razorbacks were 18-13. This year, the team improved to 22-10 and runner-up in its division. The squad squared off against Wichita State in the first round of the NCAA tournament Nov. 30. After trailing by two sets, the Razorbacks pushed the Shockers to a fifth set tiebreaker, ultimately losing.

For Torres-Lopez, the end of her collegiate career came suddenly, leaving her to ponder her next step. She is pursuing a degree in the health sciences, but isn't quite ready to trade her sneakers for a stethoscope. She wants to play professionally in Puerto Rico after graduation.

Just as suddenly, Santos finds herself cast in the role Torres-Lopez played for her. The teams' success attracted other Puerto Rican players in 2012, including Ashley Vasquez, a junior transfer, and freshman Ana Jusino. Like her rival and friend before her, Santos has eagerly stepped into the role of mentor to the newcomers both on and off the court.

"I love being in Arkansas, it helped me to grow up and gave me people to look up to," she said. "The fans make us feel so special. They know we don't have our families here, so they always make us feel like part of their family."

See more news and photos of Catholics in Arkansas sports on the monthly "Good Sports" page, only in Arkansas Catholic's print or complete online editions. Click here for subscription information.