Church has priorities for legislative session 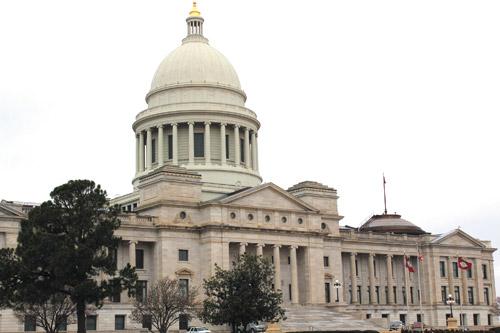 Dwain Hebda
The 89th General Assembly of the Arkansas state legislature opened Jan. 14 in Little Rock. Measures addressing pro-life issues, human trafficking and the death penalty are among the diocese’s priorities this session.

Dwain Hebda
The 89th General Assembly of the Arkansas state legislature opened Jan. 14 in Little Rock. Measures addressing pro-life issues, human trafficking and the death penalty are among the diocese’s priorities this session.

The diocese’s priority slate of pro-life, social justice and human rights initiatives aren’t exactly new legislative ground. However the landscape of the legislature, turned on its head by the 2012 fall elections, is a shifting one, according to diocesan lobbyists

Patrick Gallaher, executive director for Catholic Charities of Arkansas, said the Republican majority in both houses of the Arkansas legislature — a first in 130 years — doesn’t necessarily give similarly conservative entities carte blanche when it comes to public policy. While history shows Republican legislators to be gen­erally more open to measures that restrict abortion, they are consid­ered less tolerant than Democrats on issues such as immigration reform, social spending and curtailing the death penalty.

Arkansas’ pro-life proponents took a beating in the 2011 General Assembly as only one measure made it into law. That bill, Act 1176, mandated medical facilities performing 10 or more abortions per month to be licensed as abortion clinics and regulated by the state.

Meanwhile, pro-life measures outlawing late-term abortions, abortions performed at state-run hospitals and medical facilities and upholding a woman’s right to defend her unborn child all died in the House Committee on Public Health.

Gallaher said if there had to be only one bill enacted last go around, Act 1176 was well overdue.

“Among other things, Catholic Charities provides adoption services and we get inspected regularly and meticulously,” he said. “Imagine, before this bill it was easier to run an organization that kills babies than it was to run one that puts them up for adoption.”

Diocesan lobbyists are again focusing on a late-term “fetal pain” bill, a bill opting Arkansas out of abortion coverage in the Affordable Healthcare Act and a new bill banning “tele-med” abortions. All three bills are backed by Arkansas Right to Life.

Acknowledging that doctors have proven that fetuses can feel pain at 20 weeks, fetal pain laws prohibit abortions after that time and are currently on the books in seven states. In the last general assembly, HB1887, introduced by Rep. Andy Mayberry of Hensley, came two votes short of advancing from committee; he intends to reintroduce the matter this session.

Tele-med abortions have gained increased scrutiny in the past several years. At some abortion clinics in other states, women are never examined by a doctor, but instead communicate with a physician via a remote videoconference in the abortion clinic. If after hearing the explanation of the procedure the woman still desires the abortion, the doctor presses a button and a drawer opens containing abortion drugs. Some of the pills she takes in front of the doctor while the others she takes at home.

According to Rose Mimms, executive director of Arkansas Right to Life, Planned Parenthood is targeting predominantly rural states like Arkansas for expanding the procedure and increasing the number of abortions. Sen. Missy Irvin of Mountain View is expected to sponsor legislation outlawing the practice.

While the Patient Protection and Affordable Care Act is now federal law, implementation of the behemoth legislation falls to the states, half of whom introduced bills in 2011 that prohibited the use of public money to fund abortions. Of these, nine became law. On Jan. 22, Rep. Butch Wilkins of Bono introduced HB1100, which would prohibit public health insurance exchanges from offering coverage for abortions, except through a separate rider.

A primary concern of the legislature is to resolve the state’s Medicaid issues. This occupies two fronts, according to Gallaher. First, the state must figure out how to make up for a nearly $300 million shortfall in the state’s budget to pay for existing services. As Arkansas’ constitution mandates a balanced budget, diocesan lobbyists are encouraging the corresponding spending cuts not come from services that help the elderly, poor or indigent.

Gallaher is optimistic about his conversations with legislators who seem confident that areas like Level III care — which funds services for people who live at home but cannot perform basic daily functions such as bathing, dressing and using the bathroom without assistance — will be spared funding cuts.

The second portion of the Medicaid picture is whether to expand the program to cover an additional 250,000 Arkansans. The Affordable Health Care Act provides for funding of such expansion, but only for three years, after which
time the state will be required to shoulder up to 10 percent of the additional cost by 2020. Some legislators are suspicious of this ratio, claiming that if the government changes the percentages in the intervening years, the state will face daunting budgetary issues.

Bishop Anthony B. Tayor is in favor of expanding the program and the governor has already said he is in favor of expansion as well. Gallaher said making the argument against expansion largely relies on something that might or might not happen down the road, which pales in comparison to helping people now.

“Some of the arguments that are being made against expansion are from legislators who express concern over the national debt,” he said. “While that is a noble gesture, it’s not a very practical one. The amount of money that Arkansas would receive as a result of expanding Medicaid is miniscule compared to the total U.S. debt.”

Arkansas’ execution system went into lockdown this summer as the state Supreme Court ruled the state’s lethal injection law unconstitutional. Prevailing opin­ion (5-2) was that the law gave too much authority to the Department of Correction. The ruling blocks executions until a new law is passed addressing protocols, such as what drugs may be used and in what dosage.

The issue came to light as states struggle to procure the necessary chemicals used in lethal injection. In recent years, shortage of an anesthetic called sodium thiopental has reached a critical stage as one American manufacturer stopped production and at least one foreign company stopped allowing it to be used for human executions.

While this has led Arkansas into its seventh consecutive calendar year without an execution, law­makers are expected to address substitute chemicals, rather than eliminate the death penalty itself. The Arkansas Coalition to Abolish the Death Penalty is keeping the specifics of their legislative strategy close to the vest but are expected to vigorously oppose any bill that would resume executions.

Father Jason Tyler, pastor of St. Edward Church in Little Rock and ACADP board member, said the myriad of arguments against capital punishment can resonate with lawmakers of both parties.

“For one thing, it’s much more expensive to execute an inmate versus life in prison and we are confident that message will resonate with Republican lawmakers just as issues of race or class inequities resonate with Democratic law­makers,” Father Tyler said. “The coalition has a great opportunity to broaden its base of support.”

On Jan. 16, Gov. Mike Beebe gave a boost to death penalty opponents, telling a Little Rock audience he would sign a bill to repeal capital punishment if one reached his desk. While the governor stopped short of asking for a legislator to file such a motion on his behalf, he said the act of signing an inmate’s death warrant has changed his mind on the issue. On Jan. 30, Bishop Taylor and ACADP participated in a Senate hearing examining the pros and cons of the death penalty in Arkansas.

NO HANDGUNS IN CHURCH

Senate Bill 71, known as the Church Protection Act, would amend the current law that prohibits a person from carrying a concealed handgun in a place of worship to allow churches to decide whether to permit concealed handguns. Dennis Lee, chancellor for administrative affairs, said, “The diocese’s position is that the current law has been sufficient for the Catholic churches in Arkansas, and we see no reason to change it.  Because the proposed amendment is not necessary, the diocese is opposed to SB 71.”

The Senate approved the bill Jan. 28. Gov. Mike Beebe has said he would sign the bill into law if approved by the House.

“This would be a good time for any Catholics who want to make their voice heard to contact their local representative to express their opinion on the prohibition against carrying a concealed handgun into a church,” Lee said.

“When people hear ‘human trafficking’ they immediately think of something out of the movie, ‘Taken’,” she said. “The fact is, this is going on right in our own neighborhoods.”

Garcia said people fall victim to trafficking through bad associations, bad relationships, or because their social status makes it difficult for them to blow the whistle on their captors. People are made to perform farm labor, household duties or engage in the sex trade, either because they were sold into it or to supposedly work off some sort of debt. Last year, 69 suspected cases of human trafficking were reported in Arkansas, but it is believed that many more cases go unreported.

Garcia said three bills address many of the deficiencies in the current state law, passed in 2005. One measure would allow prosecutors broader latitude to seize property of traffickers, as well as provide victims the means to bring civil lawsuits against their captors. It also calls for the formation of a human trafficking task force and other victim’s assistance mechanisms.

The second bill would divert sexually exploited minors into the child welfare system, rather than face prostitution charges. The third would allow people previously convicted of prostitution the opportunity to have their con­viction overturned on the basis they were trafficked. It would also require certain establishments to post hotline numbers where trafficking victims can seek help.