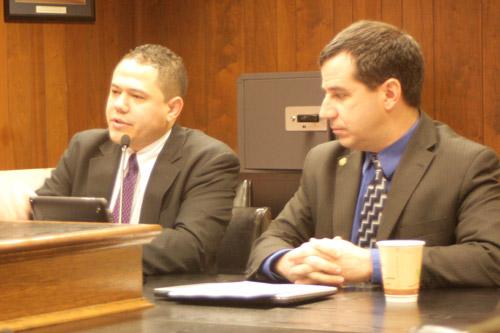 The Diocese of Little Rock is closely watching the following legislation.

It took less than 45 minutes for members of the Arkansas House Judicial Committee to unanimously advance HB1203, a bill that would put more teeth into the state’s human trafficking laws.

Once advanced, the bill sailed through the House of Representatives Feb. 8. Rep. David Meeks of Conway introduced the bill before the committee Feb. 5. The measure and two other bills addressing additional elements of the issue are legislative priorities for the Diocese of Little Rock this session.

The bill clarifies human trafficking offenses and spells out additional penalties for persons on both the supply and demand side of the human trafficking market. Traffickers and solicitors also face additional sanctions if the crime involves a minor, which in an increasing number of cases, it does.

Human trafficking would remain a Class A felony under the new bill, but trafficking of minors would be reassigned a Class Y felony, a status generally assigned to crimes against children. In addition to sentencing, traffickers would also be subject to civil judgments by victims under the proposed law.

Meeks told the committee human trafficking is on the rise in Arkansas, an assertion borne out by several recent headlines. Within the past six months alone, authorities have been alerted to situations involving both forced labor and prostitution. A recent example is the Jan. 29 arrest of a Fort Smith man on charges he brought Arkansas women to Tulsa, Okla., against their will and forced them into the sex trade there.

Reagan Stanford, crime victim services coordinator for Catholic Charities Immigration Services, told Arkansas Catholic said the problem runs much deeper than most people realize because often the crimes are charged as something other than trafficking.

“What’s actually the case is that trafficking crimes are not being recognized,” she said. “The police may charge it as sexual assault instead of what it is and that makes it very difficult to compile accurate statistics.”

Cases also receive relatively little media attention — especially those pursued by federal authorities who are notorious tightlipped — with the result of the public not knowing much of anything about the problem.

“It’s a far cry from what it was three years ago when we started, but we’re still not to the point that it’s something that’s widely reported,” she said. “I know it’s strange to say, but I’m glad when I see it in the newspaper because at least the problem is getting some attention.”

The Diocese of Little Rock is closely watching the following legislation.