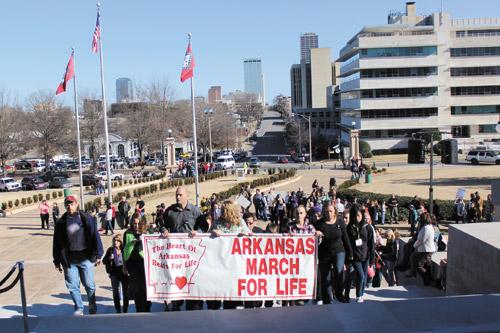 Dwain Hebda
Thousands of pro-life demonstrators march in silence to the east steps of the Arkansas state capitol Jan. 20.

Dwain Hebda
Thousands of pro-life demonstrators march in silence to the east steps of the Arkansas state capitol Jan. 20.

Pro-life activists praised passage of the measure, a priority bill for the Diocese of Little Rock and Arkansas Right to Life.

“It’s a great day in the state of Arkansas,” said Rose Mimms, executive director of Arkansas Right to Life and member of St. Theresa Church in Little Rock. “This law is going to protect many unborn babies from excruciatingly painful deaths by abortion.”

The measure, introduced by Rep. Andy Mayberry of Hensley, became effective immediately. The law provides exceptions in cases of rape, incest or to save the mother’s life but does not include any exemption for fetal disorders.

The law is similar to laws already in place in seven states that acknowledge that scientists have shown that fetuses can feel pain in the womb as early as 20 weeks.

Mary Spaulding Balch, director of state legislation for National Right to Life, said, “Unborn children jerk away from painful stimuli, their stress hormones increase, and they require anesthesia before any fetal surgery.”

The new law builds upon the Unborn Child Pain Awareness and Prevention Act of 2005 that requires doctors performing abortions on women carrying unborn children 20 weeks or greater in gestation to review printed material concerning fetal pain at least 24 hours before the abortions are performed. According to the Department of Health, 4,033 induced abortions occurred in Arkansas in 2011, and 46 of them occurred at 20 weeks and two occurred at 21 weeks or greater.

The governor justified his veto, saying he believes the bill was unconstitutional because it was contrary to the U.S. Supreme Court’s Roe vs. Wade decision. The governor said he wanted to spare the state the cost of defending such a measure.

Arkansas Right to Life representatives met with the governor shortly before his decision, attempting to assuage his concerns over the law’s constitutionality. Mimms said even though he said he was leaning toward veto, she was surprised Beebe ultimately did so.

“I really thought he was going to let it sit on his desk and become law without his signature,” she said. “Instead, the governor came out in favor of abortion on demand, an elective, non-emergency procedure that causes terrible pain to innocent babies.”

Mimms was also surprised at the number of defectors between the votes to advance the bill and those to override the veto. In the House, the first vote was 80-10 and in the Senate it was 25-7.

Marianne Linane, director of the diocesan Respect Life Office, said much of this was party politics once it became apparent the bill would receive the required simple majority in both chambers.

“I think it had as much to do with officials wanting to stay loyal to their party and the governor, as much as anything else,” she said.

Reaction from the pro-choice supporters was swift and all but assured a forthcoming legal challenge. Such threats were certainly no surprise to pro-life activists.

“I doubt that a legal challenge will come quickly, but it will come,” said Patrick Gallaher, executive director of Catholic Charities of Arkansas and a diocesan lobbyist. “I expect the pro-abortion forces will wait until the end of the session and then take the time to set up their case.”

The challenge may be largely a foregone conclusion. While seven states have passed similar laws -- two of which are under legal challenge and Arizona’s additionally injuncted until the case is heard -- there exists little legal precedence in the matter.

Mayberry told the Associated Press that the law was modeled after similar legislation in Nebraska that has not been challenged in court, and Gallaher pointed out that advancements in prenatal science stretch the definitional boundaries of “viability” upon which Roe v. Wade is based.

“Time marches on and technology marches on,” Gallaher said. “The age of viability was 26 weeks in the 1970s, but there is evidence that it’s probably now 22 weeks, maybe less. If a baby is viable at 22 weeks, then it stands to reason that pain receptors are formed and functioning at 20 weeks. That’s important because that changes when the pregnancy becomes a matter of the state’s interest.”

Additionally, pro-choice litigants may have to pick their battle or fight a two-front war. They have similarly vowed to take on the Arkansas Human Heartbeat Protection Act, which is expected on the governor’s desk soon, which would ban most abortions once a heartbeat was detected at approximately 12 weeks. Given this bill shortens the window, it may be more likely to draw pro-abortion’s fire from the 20-week law.

Gallaher said there exists legitimate questions as to how vigorously the state is willing to defend the new law. In Arkansas, the winning party can petition the court to cover legal expenses and with costs already trumping cause in the governor’s office, something as simple as filing an appeal after a lower court loss isn’t guaranteed.

“If the state were to lose it would be very costly and may actually wind up bankrolling pro-abortion well into the future,” he said. “Perhaps more damaging would be the effect such a decision would have on public opinion. All the public would hear is abortion is upheld and the court said it is OK to kill babies in the state of Arkansas.”