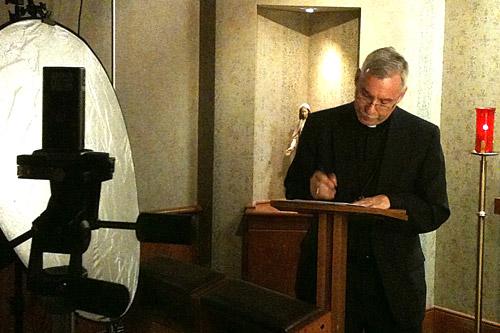 Arkansas Catholic file / Bob Ocken
Bishop Anthony B. Taylor takes a break in August 2011 while recording his “Open Your Hearts in Welcome” homily in English and Spanish. The four priorities remain important for the diocese, he said recently.

Arkansas Catholic file / Bob Ocken
Bishop Anthony B. Taylor takes a break in August 2011 while recording his “Open Your Hearts in Welcome” homily in English and Spanish. The four priorities remain important for the diocese, he said recently.

Bishop Anthony B. Taylor’s priorities for 18 months starting in September 2011 will continue to be important even if the time frame for the initiative is over.

Bishop Taylor announced during the Chrism Mass in April 2011 that he would be issuing three priorities in the fall for the Diocese of Little Rock. He had attended the Good Leaders Good Shepherds program designed for bishops and was encouraged to list three priorities for his episcopacy. At the Mass he said his priorities would focus on the Roman Missal, natural family planning training and welcoming newcomers.

In September 2011 a recorded audio homily was played at all weekend Masses to announce his “rallying cry” for the diocese. He added a fourth priority — vocations — to the list. Bishop Taylor said he received overwhelmingly positive feedback for his “Open Your Hearts in Welcome” initiative.

“It helped me to focus and give clarity to what we have been doing in the past 18 months,” he said. “It was envisioned to be for an 18-month period, but it is not like we are ending it. They are ongoing priorities for us.”

In an interview with Arkansas Catholic, the bishop was asked to reflect on his priorities.

Roman Missal: Changes to some of the Mass prayers were introduced for Advent 2011.

“I think it went more smoothly than anyone expected,” he said. “I think our people were well prepared and accepting of the changes. Such changes are not easy for people. The language is a little more difficult than what we had before. The people seemed to have welcomed it and taken it in stride. … (For the priests’ prayers) the most difficult language helps us to pause a moment and think about what I am saying. In that, (you) gain some depth.”

“We still need to train more trainers,” he said. “I am hearing positive things from the parishes…. We are seeing good results. What we had before was an introduction; this is actually a training course and they are learning to use it (and) also the values that underlie it, including the communication that needs to occur between spouses. I do know a lot more people are using it than would otherwise be.”

Newcomers: Newcomers in each parish are different, Bishop Taylor said. In some places it is retirees or immigrants, where in other places there are more new Catholics and inactive Catholics who need to be welcomed back to the faith. He said it is also important for parishes to welcome youth and young adults into active participation.

“I am constantly inspired by how welcoming our Arkansas Catholics are,” he said. “Our people are very warm and welcoming. It does require reaching out.  I guess you could say it is ‘active welcoming.’”

Vocations: The number of seminarians is holding steady, but a more thorough program has been put in place for discerners and seminarians living at the new House of Formation in Little Rock.  Bishop Taylor said the house is full and an expansion could be necessary at some point.

“Young men are responding very well,” he said. “We are getting really quality guys.”

A renewed focus on women’s vocations also has grown in the past 18 months.

“I am really pleased we had a women’s vocation gathering here and that we have some ladies that are discerning a vocation,” he said. “It has not been the case in this way in recent years. More results are occurring for female vocation formation.”

Bishop Taylor said he hopes parishes are reviewing their pastoral plans each year and looking at them in light of the diocesan priorities.

Bishop Taylor said he does not have any immediate plans to issue new priorities for 2013 and beyond. He said priorities will surface from the Presbyteral Council and even from the Vatican.

“The new pope will be giving direction to the larger Church presumably,” he said. “Once we get a new pope, there might be some things we want to do here locally that have arisen from the pope.”

Click here to read the original introduction to the Open Your Hearts in Welcome priorities, Sept. 10, 2011.

Click for the Open Your Hearts in Welcome index