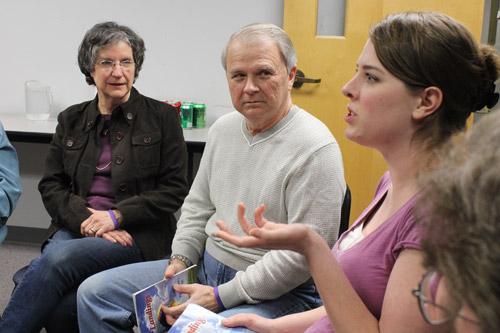 Mary Haddock was raised about as Catholic as you can be. The 57-year-old was born, educated and married in the Catholic faith and reared two sons the same way. Yet even as life took her from her native Detroit to New Jersey, something always seemed to be missing.

“I always found the Church to be very cold and distanced. I felt left out,” she said. “I lived two blocks from the Catholic church when I lived in Atlantic City and I still felt no sense of community.”

Sadly, the move from New Jersey to Arkansas eight years ago didn’t change much other than the scenery. Despite being a much smaller community, she didn’t feel welcomed in Jacksonville. She stopped attending Mass altogether.

Stories such as Haddock’s are all too common, but many parishes in Arkansas have made a renewed effort to help welcome such parishioners back. Some reach out through Rite of Christian Initiation programs, while others have launched ministries designed specifically to help people looking to return.

One such program, Landings, has taken hold in central Arkansas. St. Jude Church in Jacksonville is in its third year of Landings ministry and served as a model for a program launched jointly in 2013 by St. Anne Church, St. Patrick Church, Immaculate Conception Church and Immaculate Heart of Mary Church, all in North Little Rock.

“We started out with 11 returnees and seven of those will finish the course,” said David Kraft, who with his wife Rosemary coordinates the multi-parish ministry. “I have seen our attendees become more open and more sharing. Our team members have learned and grown as much as the returning Catholics.”

Landings typically doesn’t bring in dozens of people at a time, which, coordinators say, works better anyway given the raw feelings often involved. Meeting once per week for nine weeks, participants pray, discuss what led them away from the Church and lend each other moral support. Program leaders lead meetings and provide a familiar face once participants decide to return to Mass.

Other parishes’ welcome back ministries, while often less structured, operate largely according to the same principles. Tony Schneider heads up Catholics Returning Home ministry at Christ the King Church in Fort Smith. His program is promoted largely through word of mouth or through the church’s website where those seeking to join the Church, return to regular Mass or help another to do so can access www.catholics comehome.org.

The impact of these resources pale, however, compared to the one-on-one connections he makes with people and the follow-up provided through regular welcome events for new and returning parishioners.

Schneider said the reasons for people leaving and staying away vary, but the motivation to return is almost unanimous.

“People are searching for the truth,” he said, “and this is the true Church.”

In her desire to grow spiritually, Haddock began reading the Bible on her own and was so refreshed by it, she began sharing her faith with customers at her workplace.

About 18 months ago, one such conversation was overheard by Pat Kaminsky, Landings coordinator at St. Jude Church.

“Pat said, ‘You’re Catholic, aren’t you?’ and asked me if I attended church. When I said I didn’t, she said, ‘We need to get together,’” Haddock said. “I was skeptical at first, but I told her I would try because this is something I needed desperately in my life, and I needed it in the company of other Catholics.”

Slowly, Haddock found her way back to Mass.

“I’m so grateful for the others in my Landings group. It was really important to be able to share with other people what I was dealing with,” she said. “We worked together to help bring each other back.”

Click for the Open Your Hearts in Welcome index