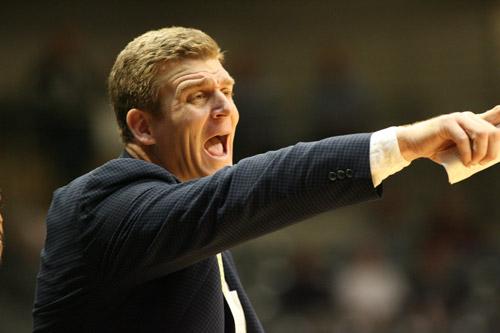 Nelson Chenault, UALR
“I went from the NBA, where it was kill or be killed every night, straight into coaching a sixth-grade team ... where we all held hands and prayed before every game.” Joe Kleine

Nelson Chenault, UALR
“I went from the NBA, where it was kill or be killed every night, straight into coaching a sixth-grade team ... where we all held hands and prayed before every game.” Joe Kleine

“You want to know about faith?” said Joe Kleine, guffawing at the theological insight he’s about to deliver. “Faith is when you’re guarding the lane and you see Shaq coming right at you and you have to stand there and try to stop him. All you can think is, ‘Jesus, please help me! Send down some chariots!’”

When you’re a couple of insoles shorter than 7 feet tall, you can’t get through life without collecting some interesting stories. So it is with Kleine, six years an assistant coach for the University of Arkansas-Little Rock men’s basketball team and a lifetime Catholic.

In addition to the evangelizing benefits of taking a charge from Shaquille O’Neal, there’s also the one about Kleine, back home in Slater, Mo., on summer break from college, being enlisted as a Mass server.

“Msgr. Kenny was our Irish pastor and he went, maybe, 5’ 7” if he was wearing heels,” Kleine said. “I’d bring him the book of prayers and he’d say in that Irish accent of his, ‘Joh, can ya looer the book?’ I wound up holding it about waist high.”

Or, on his head coaching debut in 2000 after retiring from a playing career that included an Olympic gold medal, Arkansas Sports Hall of Fame stats at the University of Arkansas-Fayetteville and 15 NBA seasons competing against the likes of Charles Barkley and Karl Malone.

“I went from the NBA, where it was kill or be killed every night, straight into coaching a sixth-grade team at Christ the King School (in Little Rock) where we all held hands and prayed before every game,” he said. “Needless to say I was a little confused for a while. I was pretty intense.”

That intensity is what many retired athletes find hardest to satiate when the playing days are over. Though some of Kleine’s drive went into a successful business career — Joe and his wife Dana co-own Corky’s Ribs and BBQ in Little Rock and North Little Rock — it wasn’t the same as going head-to-head on the basketball court.

Only one activity seemed to provide his competitive streak suitable outlet — coaching. Kleine, a father of four ages 11 to 24 and foster father of one, started thinking about coaching as his playing days wound down and after scaring the holy bejeezus out of every Catholic middle schooler in Central Arkansas, he moved on to coach all-star squads at the U.S. Olympic Festival and in international play. He also volunteer coached in the Amateur Athletic Union and at Catholic High School, the latter being one of his favorite projects.

“Coach (Tim) Ezzi is the best basketball coach in Little Rock, hands down, and there are a lot of great basketball coaches here,” he said. “Basketball isn’t a one-size-fits-all game; you have to play to your strengths. Coach Ezzi does that better than anyone.”

Kleine similarly volunteered at UALR under Porter Moser before being hired on by current coach Steve Shields. Today, he combines the finer points of playing the low post with doses of hard-won life lessons for his players.

He said he’d like to be a head coach one day, modeling himself after his mentors, particularly the one he keeps on speed-dial, Hall of Famer and former Razorbacks coach Eddie Sutton.

“Coach Sutton was a second father to me,” he said. “He was very demanding, very strict, but he was fair. He was also approachable, you could talk to him even though he didn’t always tell you what you wanted to hear. He’s a good man and he deeply cared about his players.”

Being put on par with Kleine’s father is a compliment of the highest order, given the level of respect the late Richard Kleine engendered in Joe and his four brothers. From the value of hard work to the absolute devotion to one’s Catholic faith, the former Marine and World War II vet set a tone that still rings in Joe’s ears.

“Dad hammered it home to us — God and family,” he said. “Six a.m. he’d pull us out of bed to go to daily Mass or to pray the rosary and if you started mumbling those Hail Marys he’d click those fingers, and say ‘Step it up, you gotta step it up.’”

Like a lot of sons, Kleine said his father’s lessons didn’t take root all at once, but ripened, one by one, with the passage of time. His Catholic faith is a prime example.

“When you’re young you’re worried about your personal stuff. ‘Am I getting enough playing time? Will Dana go out with me?’” he said. “You’re not exactly enthralled with your faith.

“As you get older, you begin to worry about your kids or how the choices you make affect your family or especially when you see sickness and misfortune in other people. Suddenly, you realize how important faith is and how blessed you are.”