Abortion, trafficking and healthcare agendas all advanced by General Assembly 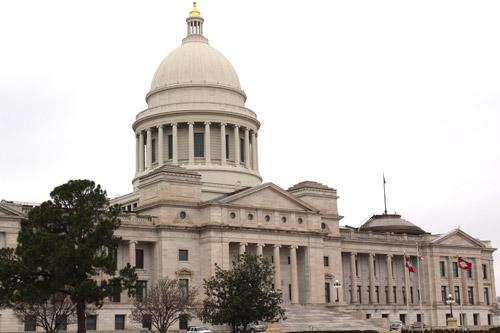 The 89th General Assembly of the Arkansas State Legislature was productive regarding diocesan priority legislation.

“From a diocesan perspective, this session was in nearly every area a home run,” said Patrick Gallaher, diocesan lobbyist and director of Catholic Charities of Arkansas. “If we gain some progress on repealing the death penalty, it would be a grand slam home run.”

On the abortion front, the assembly passed laws that are among the most restrictive in the nation. Rep. Jason Rapert of Conway and Rep. Andy Mayberry of Hensley made headlines with measures that reduced the time window in which abortions could be legally performed to 12 and 20 weeks, respectively. Both measures became law over Gov. Mike Beebe’s veto.

Rapert’s Arkansas Human Heartbeat Protection Act was particularly controversial; when it became law March 6, it was the most restrictive abortion statute in the country. North Dakota eclipsed Arkansas March 26, passing a measure that banned abortions after a heartbeat is detected, around six weeks.

Lawmakers also passed legislation to exclude abortions from being covered by the state’s forthcoming insurance exchange, in accordance with a provision of the Patient Protection and Affordable Care Act.

The only major pro-life measure that didn’t take shape this session was Arkansas Right to Life’s proposed legislation to outlaw so-called “robo-abortions,” those procedures conducted via teleconference where the attending physician isn’t on the premises.

A second act mandated hotline and other information for the National Human Trafficking Resource Center be posted in certain establishments and transportation hubs and established a framework for expunging convictions to certain crimes on the basis the convicted was a victim of human trafficking.

While pleased with the tougher statutes, advocates were unsuccessful getting more punitive elements, including seizure of a trafficker’s real and personal property.

The diocese has been consistent in its assertion that Medicaid be expanded to benefit the state’s working poor, but the issue quickly bogged down in a partisan quagmire and for the first three months of the session, little progress was made on behalf of the 250,000 Arkansans who are slipping through the health care cracks.

A novel compromise, the Healthcare Independence Act of 2013, began to gain momentum in April. The bill proposed the state buy insurance policies for people who would otherwise be covered by Medicaid, except in narrow exceptions. The cost of buying the policies for the first three years would be covered by federal money with the state being responsible for a percentage of the cost after that. The diocese supported passage of the private option plan, according to Dennis Lee, diocesan chancellor for administrative affairs.

Approving the so-called “Arkansas plan” — by now touted as a model for other states to emulate — proved a roller coaster ride. While the framework legislation passed both chambers, an April 15 House vote failed to garner the 75-percent majority needed to approve its funding. Under the governor’s vow not to call a special session and with proposed tax cuts in jeopardy, the House voted again and approved the bill April 16. After a marathon session, the Senate followed suit the next day and Gov. Beebe signed it into law on April 18. The plan will still have to get Washington’s OK, which is expected, before it can be implemented.

Abolition of the death penalty was the only diocesan priority not realized. Arkansas’ capital punishment has been suspended since the state supreme court declared the statute unconstitutional in 2012. That ruling forced lawmakers to re-work the law’s language and abolitionists saw an opportunity to debate the larger issue, especially when Gov. Beebe unexpectedly announced he would sign a bill that outlawed capital punishment should it reach his desk.

In February, Bishop Taylor testified before a Senate committee on his personal experience with capital punishment cases and the moral objection of the Church to the death penalty. Bishop Taylor was joined by Ray Krone, a Tennessee man wrongly sentenced to die but spared on appeal.

Near the end of the window for introducing new bills, two proposals to end the death penalty were introduced, SB1055 by Sen. Joyce Elliott of Little Rock and SB2166, by John Walker, also of Little Rock. Bishop Taylor responded with an appeal to Catholics across the diocese to contact their state legislators to urge them to push for repeal of the law.

Both bills were referred to the Senate Judiciary Committee. SB 1055 was heard April 15 and SB2166 was scheduled to be heard in committee April 16.

The Parental Choice Scholarship Program Act, HB 1897, which would have provided parents with an educational voucher system, was shelved by the House Education Committee, which recommended an interim study of the issue. A second measure, HB 1004, would create an income tax credit for education expenses. That measure, introduced by Rep. Denny Altus of Fort Smith, would grant a state income tax credit equal to 25 percent of defined education expenses over $300, for each child enrolled in any Arkansas school in grades kindergarten through 12th grade. The proposal was set to be debated by the House Committee on Revenue and Taxation April 16.