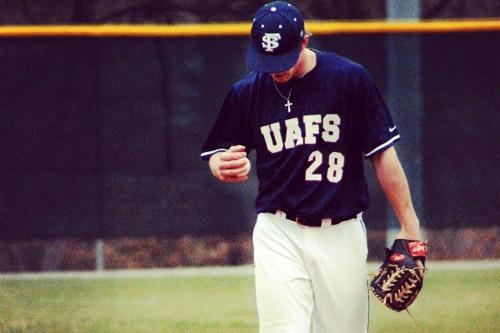 “After my first year, I realized that I needed God more in my life and that spiritual side has helped the mental side on the field.” Hasten Freeman

“After my first year, I realized that I needed God more in my life and that spiritual side has helped the mental side on the field.” Hasten Freeman

Hasten Freeman believes in keeping things simple. Ask him about developing his pitching and he breaks it down to its most basic elements.

“Once you learn one pitch, it gets a lot easier to develop others,” said the 19-year-old. “It’s all just a little tip of the hand to one side or the other or over the top.”

Seeing things as he does — as clear as freshly painted baselines — it sometimes eludes him just how remarkable his rise through the University of Arkansas Fort Smith’s starting rotation has been. But remarkable it is. As of April 17, the sophomore right-hander from Scranton is 4-2 with three complete games and leads all starters in ERA (3.00), strikeouts (43), saves (4) and winning percentage (.667). He’s also second in innings pitched (51), appearances (13) and relief appearances (8).

Not bad for a kid who no one at UAFS had ever heard of when he reported to class in the fall of 2011. Back then he was just another former high school hotshot, a three-sport standout at Subiaco Academy with five combined all-conference and all-state designations in baseball, basketball and football — which meant exactly zip to college recruiters.

“I came here to school because it wasn’t far from home. I never really considered anywhere else,” he said. “When I got here, I was invited to walk on.”

You read that right — even in his own backyard, Freeman wasn’t considered athletic scholarship material which in a strange sort of way worked in his favor. It freed him up to choose a school for reasons other than money; in this case, staying close to his family. He calls his parents — Joey, a career man with the gas company, and Linda, who works in his high school’s business office — his greatest supporters. They make most every home game, just like they did when he was pitching for the Trojans. His older sister Stephanie, a senior at UAFS, does too.

His family’s steady influence helped him navigate the difficulties of transitioning to college life off the field as well as the stepped-up competition he faced on the mound.

“It was a lot harder to stay ahead of your classes, particularly when we were gone for two weeks straight over spring break,” he said. “When you loaded baseball on top of that it made things that much harder.

“Fortunately, I felt like I was better prepared than a lot of guys because of where I went to high school. Subiaco is a good college prep school and they really challenge you there. I was a lot more ready for college.”

Freeman delivered a strong rookie season, going 4-2 in 15 appearances, including three starts, recording 44 strikeouts. Still, the wear and tear of off-season training and the grind of a long season woke up the youngster to the reality that this wasn’t the same game he’d played and loved since he was 7.

“The mental part is the toughest,” he said. “These guys all train for this and if you don’t bring your A-game every single time they will make you pay for it. This isn’t high school where you can get away with a lot more stuff.”

More than experience, Freeman credits his Catholic faith for his advancement this season. He said the renewed emphasis helps him leave in God’s hands everything outside of pinpointing his fastball, curve, breaking ball and emerging two-seam slider.

“It sounds really cliché, but focusing on my faith has been the difference this year,” he said. “At Subiaco we were around church every day, but at college you don’t talk about God. After my first year, I realized that I needed God more in my life and that spiritual side has helped the mental side on the field.”

As part of this new commitment, Freeman makes Mass every Sunday and when he’s home on break, he attends adoration with his mother. The Freeman family are members of St. Joseph Church in Paris.

His goals this season are to get back to the conference championship and, unlike last year, bring home the title and qualify for regionals.

“Don’t let anyone detour you from your dreams,” he said. “Almost everybody told me that I couldn’t pitch at the next level. Don’t let what others think make you lose confidence; believe in yourself.”