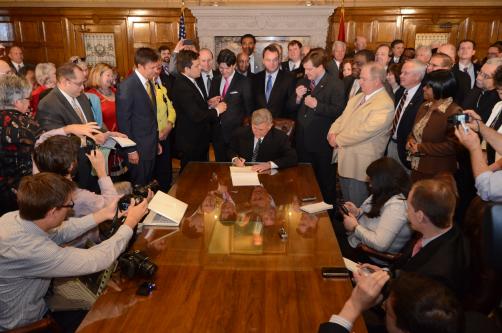 Bishop Anthony B. Taylor praised the Arkansas legislature’s efforts passing the Healthcare Independence Act of 2013, which will provide a means for 250,000 low-income Arkansans to obtain private health insurance.

One of the Diocese of Little Rock’s legislative priorities this session was expanding health care for the state’s working poor.

The measure was hotly contested during the 89th General Assembly, requiring two votes in the House and last-minute tweaks in the Senate to gain the 75-percent approval in both chambers required of spending bills.

“I am grateful that our governor and state legislature were able to come up with a plan, the ‘private option’, that gained sufficient bi-partisan support to meet the extremely high bar of 75 percent of legislators in each chamber voting in support of the measure,” said Bishop Taylor, who attended the bill signing at the State Capitol April 23 with Sister Joan Pytlik, DC. “Like any work of compromise, this was not a perfect bill, but it was far better than doing nothing, which was the only other option on the table.”

“I’m very glad it went through,” she said. “Bottom line, this bill was the right thing to do.”

The new law closes a major gap in providing health insurance for an estimated quarter million “working poor” Arkansans who earn too much to qualify for Medicaid, but too little to afford private insurance.

Originally, battle lines cut along whether or not to expand Medicaid — using federal dollars — to include the additional citizens. Opponents dug in against any increased spending that in their view exacerbated the national debt crisis or appeared to endorse the Affordable Care Act.

“The Medicaid levels in Arkansas are so low and that if a person does qualify, you wonder how they survive day-to-day,” she said. “The people this bill helps are those who are working, but for whom even a $25 dollar co-pay is a hardship.”

The new law provides a funding and administrative mechanism for individuals who earn 138 percent of the federal poverty level — $15,145 annually — to obtain health insurance from the forthcoming insurance exchange, a kind of insurance marketplace created under the federal Affordable Healthcare Act. The premiums for the insurance policies will be paid for with federal Medicaid dollars.

“Although simply expanding Medicaid would have been the financially more cost-effective approach to take, the legislators and their constituents that were ideologically opposed to anything that would expand the role of government led to this eventual compromise: a moderately more expensive ‘private option’ plan,” Bishop Taylor said.

The plan is so novel that at first, it wasn’t clear whether funds earmarked for Medicaid expansion could legally be spent in this fashion. But when Gov. Beebe received preliminary approval for Arkansas to craft the legislative framework from the head of U.S. Health and Human Services in February, other states began to look to model their own healthcare statues after it, should it become law.

“I know that it took courage for some legislators to do what would be in the best interest of the people of Arkansas, even at significant political risk to themselves,” Bishop Taylor said.

The plan will be funded entirely by the federal government until 2017, at which time the state will shoulder some of the cost up to 10 percent by 2020. While some financial projections forecast the state and private employers saving money annually, others disagree. For that reason, the law includes an opt-out clause that gives the state a trap door should lawmakers feel the financial burden is too substantial.

Regardless, it is important to recognize that this law only addresses one tentacle of the health care maelstrom, DiPippa said. It does not, however, reform a system rife with problems from skyrocketing costs to lack of primary care physicians to addressing the needs of other marginalized citizens.

She said while many of the people currently standing in line to get into Westside and Arkansas’ 30 or so other charity clinics now have options, there are plenty of others — notably, undocumented immigrant families who do not qualify under the Healthcare Independence Act — waiting to re-fill her waiting room.

“Let’s be clear, this bill isn’t health care reform, this bill just figured out who pays for what,” DiPippa said. “I’d love to be put out of business because that would mean everyone was covered. But that’s not happening anytime soon.”