The last class graduates from St. Joseph in Pine Bluff 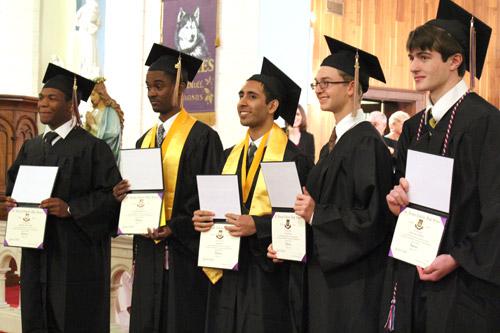 PINE BLUFF — Gail Bryant, business manager for St. Joseph Church in Pine Bluff, swung open one of the heavy white doors that separate the entryway and the sanctuary. Through etched glass was visible the graduating class of 2013.

“Now, remember what I told you. Smile!” Bryant said to the seniors. “This is a happy day.”

While everyone assembled May 10 would’ve agreed with the sentiment, a palpable sense of nostalgia also hung in the air during the graduation ceremony. Among the beaming parents, picture-taking classmates and assorted dignitaries sat the 800-pound gorilla that is the reality of the school’s closing May 24.

“It’s bittersweet,” said principal Alexandra Pritchett. “I’m very happy for our graduates and I’m very proud of them. Every day was an education for me; they all taught me so much.”

“Bittersweet” was a common word used by those witnessing the school’s final graduation. It was written on the faces of the faculty seated in the front pew of the church and it tinged parents’ recollections of their children’s educational years there.

Still, as commencement speaker Mary Lensing asserted, looking squarely at the graduates lining the front pew before her, “We are not here tonight to look at the past, the what-ifs, we are here to focus on the future. And you are that future.”

The students who addressed the audience lent dignity and even moments of humor to the event. In his opening remarks, class president Chris Taylor warmly welcomed guests and thanked them for their continuing support. Taylor, son of Lou and Janey Curry-Taylor, will attend Hendrix College in Conway, majoring in biology.

Zoheb Yunus, valedictorian, delivered a highly personalized commencement address, sharing character traits and amusing stories about each of his classmates. He said having such insight into his peers as people was one of the advantages of a small class. Yunus, the son of Sonia Shahjhan, will attend Hendrix College and study fine arts.

Randy Whiteside Jr., salutatorian, challenged his classmates to strive for excellence in whatever course they followed, saying St. Joseph had given them “the tools for achieving success in life.” Whiteside is the son of Randy and Alicia Whiteside. He will study business at the University of Central Arkansas in Conway.

The other members of the Class of 2013 include:

n Nicholas Brown, son of David and Belinda Brown. He is also bound for the University of Central Arkansas, with plans to study business.

n Patrick Wauters, son of Ronald and Stephanie Wauters, who will start his college career at Southeast Arkansas College in Pine Bluff and then transfer to the University of Central Arkansas to study communications.

The emotions of the evening came to a peak as Lensing, school board president and the first principal of St. Joseph School, delivered her commencement address.

“In preparing this presentation I realized that 12 years ago, I was standing right here to congratulate,” she said, before pausing to collect her emotions, “and bid farewell to the first graduating class of St. Joseph and at that same time, you were just beginning your education journey.”

On March 27, it was announced that the Catholic educational journey of the students and school would be coming to an end. The school was at risk of closing in 2012, but a rally of community support convinced Bishop Anthony B. Taylor to grant a “year of grace” to build upon the momentum.

About 100 students were required to make the school financially viable and a minimum of 60 were needed to stay open. When pre-enrollment for the fall term topped out at 42 — two fewer than the 2012-2013 headcount in fifth  through 12th grade — it became clear the school’s struggle to survive was over. St. Joseph is one of two Catholic schools to close at the end of this term, the other being St. Raphael School in Springdale.

While everyone associated with the school knew the possibility of closure was significant and had a year to prepare themselves for the outcome it was obvious that for some, the reality only started to sink in as the graduates clutched their diplomas and processed out of the church. In a little under an hour, 175 years of Catholic education in Jefferson County had ended.

In her remarks, Lensing marked the moment, saying, “I told that first graduating class they were the Alpha, the beginning of many graduates to follow and they were the visible symbol to all of a dream that became a reality … Tonight, 12 years later, that reality comes to closure, with you, as the Omega — the ending graduates from this school.

“We are here to celebrate each of you and the dreams you have that can become your own reality."