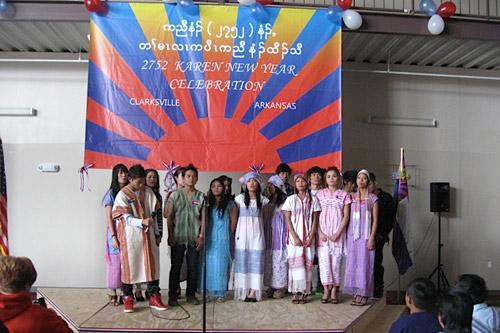 The Karen refugee community in Clarksville celebrates the Lunar New Year Jan. 25. The Catholic Charities Refugee Resettlement Office provides English as a Second Language classes and other services to the refugees.

The Karen refugee community in Clarksville celebrates the Lunar New Year Jan. 25. The Catholic Charities Refugee Resettlement Office provides English as a Second Language classes and other services to the refugees.

CLARKSVILLE — More than 300 refugees from Myanmar, formerly known as Burma, are now living in Clarksville.

They receive English as a Second Language training, immigration assistance and other services from the Catholic Charities refugee program, based in Springdale.

The sudden Myanmarese population boom started more than two years ago when management at the Tyson chicken rendering plant in Clarksville hired a Myanmarese recruiter to help address problems with turnover and chronic absenteeism. The recruiter has been traveling to various U.S. cities with large populations of Karen refugees, offering them employment in Clarksville. Most of the recruits work as deboners.

According to Rebecca Bryant, who runs the refugee program, “The Burmese are considered highly desirable factory workers because they are nimble and have a good work ethic.”

The Clarksville population consists almost entirely of Karen people, an ethnic minority in Myanmar. For centuries, they lived in small villages in the jungle of eastern Myanmar until persecution from the country’s military dictatorship became a crisis. Starting in the 1980s, many fled for their lives to Thailand, and nine refugee camps were established along the Thailand-Myanmar border.

The U.N. High Commission on Refugees finally started a permanent resettlement program in 2005. Tens of thousands have come to the United States since then.

“I have many clients who were born or grew up in the refugee camps,” Bryant said. “The rest arrived in the camps as teenagers or adults.”

ESL classes are offered in the camps, but the majority of refugees arrive in America unable to speak English. Bryant teaches beginner and intermediate classes in Clarksville. In addition, the refugee program helps with permanent resident and citizenship applications, medical issues and cultural orientation.

This story appeared in the Catholic Charities Connections special supplement to Arkansas Catholic June 15, 2013. Click here to read the entire supplement as a PDF document.