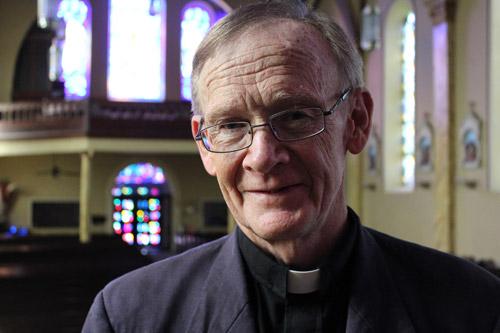 Dwain Hebda
Father Alan Rosenau, associate pastor at St. John the Baptist Church in Hot Springs, will observe his 25th jubilee as a Catholic priest in November. The former Episcopal clergyman took a winding path to the Catholic priesthood.

Dwain Hebda
Father Alan Rosenau, associate pastor at St. John the Baptist Church in Hot Springs, will observe his 25th jubilee as a Catholic priest in November. The former Episcopal clergyman took a winding path to the Catholic priesthood.

If faith is a journey, then Father Alan Rosenau, associate pastor of St. John the Baptist Church in Hot Springs. is a certified globetrotter guided by a fascination with religion and the idea God was never far away.

“The first word that comes to mind is gratitude,” he said of the past 25 years as a Catholic priest. “Especially since I guess you could say I did it all backwards.”

It started around age 10 when, growing up in a religiously indifferent household outside Pomona, Calif., he began attending “whatever church was closest, mostly Methodist” a habit fed by his maternal grandmother.

“I’d spend summers with her and she was a really religious-slash-spiritually minded person,” he said. “She was a significant influence on me.”

While Father Rosenau’s parents didn’t initially share their son’s faith, they did nothing to discourage it.

Graduating high school, he knew his future would be in religion either as a teacher or in consecrated life, or both. To his surprise and delight, his parents enthusiastically supported his choice. What he couldn’t have known was the spectrum of religious thought that awaited him in the world.

“I was committed to doing something that had to do with religion,” he said. “Just exactly what wasn’t clarified.”

His journey began at Hillsdale College in Michigan for one year’s pre-theology studies and then back home to liberal arts Pomona College and its heavy conservative American Baptist influence. He distilled his vocational focus sufficiently to enter an Episcopal seminary after that, but it did little to narrow the diversity of religious philosophy he experienced.

“My seminary years were really most enjoyable,” he said. “Berkeley in the 1970s was a place where there were people from all over and whose theology was very mixed. You had people as orthodox as could be and you had people who were really far out there. It was a very, very interesting time.”

Included in that experience were classes in Catholicism taught by members of local Dominican and Franciscan communities. Father Rosenau remembers in particular one brother’s lecture on the Virgin Mary that left a distinct impression on him.

Reaching the end of his studies, he began to consider where he wanted to live out his ministry. He looked at the South as an adventure and Arkansas was home to his wife, Joanne, whom he married in 1971. He arrived in Fayetteville in mid-1973, where he was ordained but just five years later, the Episcopal Church started to experience internal turmoil, and he began to discern his vocation all over again.

“It was a bumpy time, I was not sure I wanted to do this, or if this is even what I was supposed to do,” he said. “It finally came down to I didn’t want to have to cross my fingers or say, ‘Well, I believe, except for X, Y and Z.”

Father Rosenau thus started a 10-year journey toward his entering the Church with his family and then his ordination as a Catholic priest in November 1988. While the ordination of married former Episcopal priests was allowed by a special Vatican provision instituted in 1980, the ordination Mass — complete with his three children in attendance — was very low-key.

“It was like, ‘Shhh, don’t tell anybody,’ he whispered jokingly. “Back then they thought it would create a real scandal.”

His assignments have included Hot Springs Village, Malvern, Mount Ida, Arkadelphia Benton and briefly as pastor of St. Mary Church in Hot Springs. He said the administrative aspects of being pastor didn’t play to his strengths, and he’s been happy in supporting roles everywhere else. He’s also enjoyed his role as a chaplain at Mercy Hospital Hot Springs.

Reflecting on the past 25 years — which, interesting enough, aligns with the 40th anniversary of his Episcopal ordination — he’s satisfied to have come home at last, even if he took a decidedly scenic route.

“It was an adventure in some ways, not necessarily always good, but one that enabled you to touch people and for them to touch you, if you let them, in a way like no other,” he said. “I’ve been blessed by other people and by the opportunity to help other people. That’s the best gift of all and I thank God for it.”