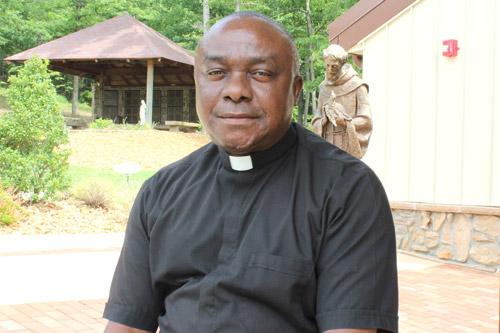 Dwain Hebda
Father Oliver Ochieze, pastor of St. Francis of Assisi Church in Fairfield Bay, will celebrate his silver jubilee in September. “Humanity is basically the same,” he said. “They just express their faith differently.”

Dwain Hebda
Father Oliver Ochieze, pastor of St. Francis of Assisi Church in Fairfield Bay, will celebrate his silver jubilee in September. “Humanity is basically the same,” he said. “They just express their faith differently.”

FAIRFIELD BAY — Father Oliver Ochieze’s vocation has been a study in obedience. Time and again over the past 25 years, God put turns in his path, each of which was accepted if not fully understood or anticipated.

From his office at St. Francis of Assisi Church in Fairfield Bay, a gorgeous community of lakes and mountain vistas in north central Arkansas, Father Ochieze still shakes his head over how differently his vocation unfolded compared to what he had envisioned.

“I never thought I’d leave my diocese in Nigeria,” he said. “My bishop had made his ‘ad limina’ and when he returned he said, ‘I met the bishop from Arkansas and he asked me to give him my best priest.’ I thought he was kidding; I didn’t even have a passport.”

The shock of the assignment was understandable; Father Ochieze had never even been to other parts of Africa. His life had been spent among family and countrymen. The middle of Patrick and Theresa’s 12 children, he attended a Catholic school where his father was headmaster. As an 8-year-old altar server, he watched the priest during Mass with fascination.

“I always watched very closely what the priest was doing and he sang so well. I loved the singing,” he said. “I felt the pull (to vocations) was there.”

The first part of his vocational story went pretty much according to script — he attended a high school seminary and then Bigard Memorial Seminary. After ordination in 1988, he earned advanced degrees in moral theology and education from Catholic Institute of West Africa. For 11 years, he relished his day-to-day life in local parishes.

It was this idyllic and highly predictable picture into which crashed the meteor that was his assignment to America.

“All I knew of America was what we saw on the news or maybe in the movies,” he said. “You didn’t see too many images portrayed that were religious images. The people would come up and they were very worried about me going because they were afraid I was leaving the Church. If you’re going to Rome, good! But going to America, many people said, ‘Please, please, Father, come back to us and still be a priest.’”

Father Ochieze touched down in Arkansas in September 1999. Although the colors are splendid that time of year all he and his fellow Nigerian Father Linus Ukomadu noticed was the temperature — “It was cold for us,” he remembered. But it was quickly offset by the warmth of their reception.

“Msgr. (Francis) Malone welcomed us and gave us our first meal in America,” he said. “He was so down-to-earth and humble, I immediately liked that man. The bishop (Bishop Andrew J. McDonald) was also very friendly.”

Father Ochieze’s first assignment was in North Little Rock, serving St. Mary and St. Patrick churches. He then spent time in Sheridan and Fordyce, before taking his current role as pastor of St. Francis of Assisi Church in Fairfield Bay in 2008. Each assignment helped strip away some of the negative images that had been painted of Americans as he discovered what was constant about his congregants.

“Humanity is basically the same,” he said. “They just express their faith differently.”

He also found time to expand his education, earning a master’s degree in rehabilitation counseling from the University of Arkansas Little Rock and a doctorate in pastoral counseling from the Graduate Theological Foundation in Indiana. It’s in this area of his ministry that he feels the connection to his flock most personally.

“When I’m going into Mass, I feel like I’m carrying the load of people’s issues, and I’m getting them to God,” he said. “You really can’t talk to me before Mass. Coming out, I’m smiling and singing, but before, I’m really very serious.”

He hopes the joy with which he celebrates Mass is contagious to those who would follow in his footsteps.

“The seminarians are our younger brothers, and if they see a priest is not doing good, then you lose vocations,” he said. “I don’t know why God chose me, but there is a purpose in everything and I think my purpose is getting people to see goodness. God accomplishes great things, we are just workers in the vineyard.”