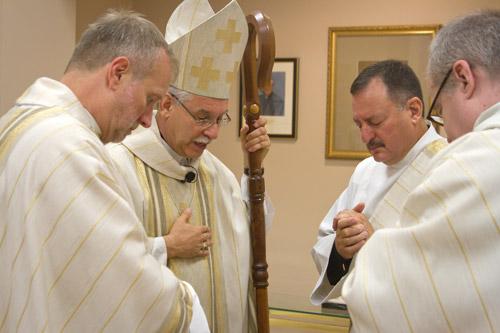 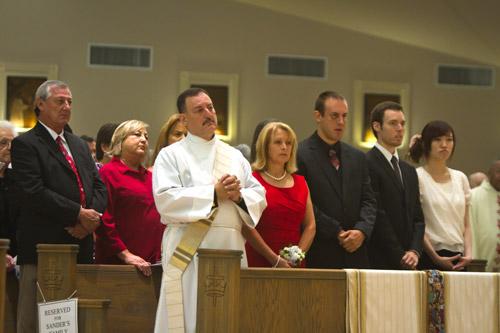 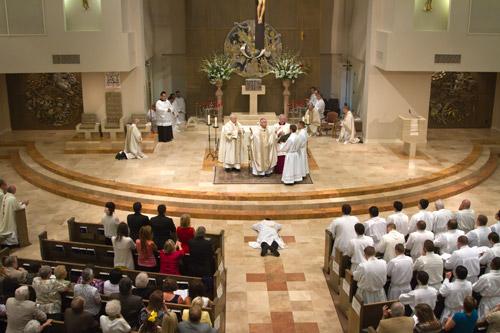 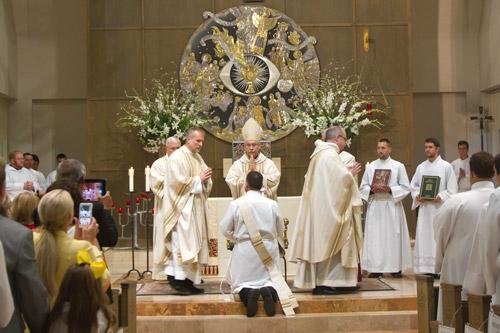 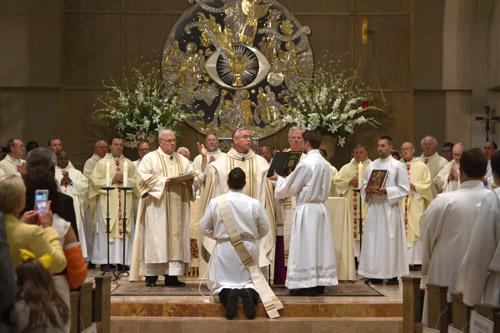 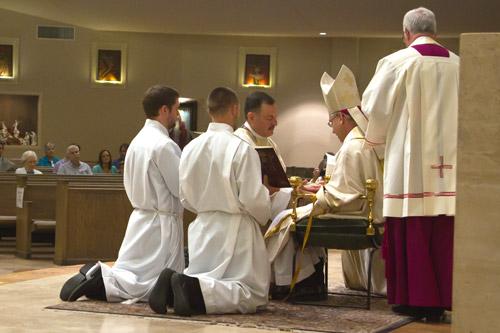 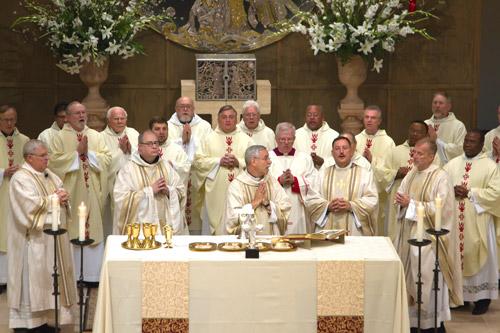 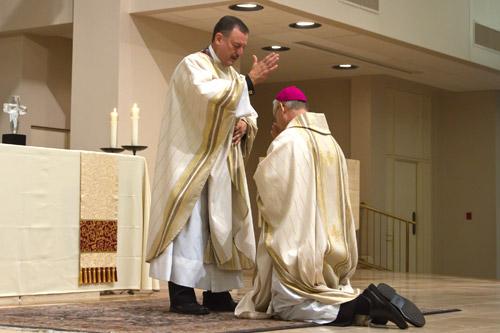 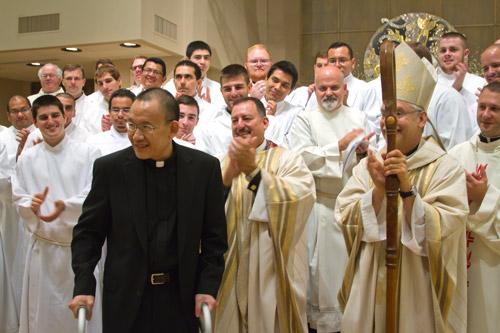 Newly ordained priest grateful doors were open to him 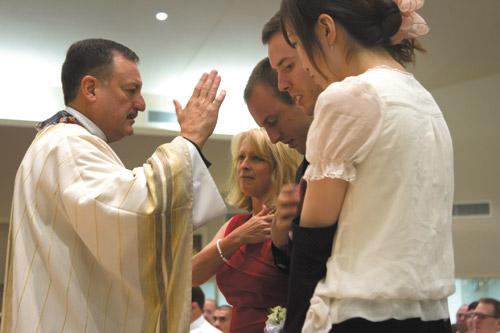 Bob Ocken
Father George Sanders blesses his family — wife Brenda, sons Gregg and Eric and Eric’s girlfriend — at the conclusion of his ordination Mass Aug. 3 at Christ the King Church in Little Rock.

Bob Ocken
Father George Sanders blesses his family — wife Brenda, sons Gregg and Eric and Eric’s girlfriend — at the conclusion of his ordination Mass Aug. 3 at Christ the King Church in Little Rock.

On his ordination day Aug. 3, Father George Sanders reflected on his journey that got him to Christ the King Church in Little Rock kneeling before Bishop Anthony B. Taylor.

As the bishop laid hands on him, as he prostrated himself during the Litany of Saints and had his hands anointed with chrism oil, he thought back on his life.

At 14, he first heard the calling to become a priest.

When he was 39 years old, the El Dorado native joined the Charismatic Episcopal Church and served as a priest in that church for three years. When he left the church in 2001 he was told he could never become a Catholic priest.

When he was 47 years old, he and his wife Brenda joined the Catholic Church.

Four years later, he finally began his studies for the Catholic priesthood. It was initially believed that Sanders would be able to be ordained in 2011, but it took another two years of training and patiently waiting for the ordination date to be set.

Now at 57 years old, he is looking at a new journey as a hospital chaplain and administrator at St. Patrick and St. Mary churches in North Little Rock.

“I remembered all the ups and downs and remembered the journey. My greatest thought is that this journey has come to end and my new journey is just beginning. I am really excited to get out and work in God’s kingdom.”

Sanders’ youngest son Eric, said, “It’s about time. … It seemed like a lot of doors were closed to him, but I guess God just kept leading him.”

Eric, 27, is attending law school at the University of California in Hastings and is spending time this year at a Chinese law firm and taking courses for his degree.

Doors initially seem closed to Sanders because he is married. The Vatican has a special provision for Catholics who were previously ordained ministers to request to be ordained Catholic priests. Then-Bishop J. Peter Sartain made the initial request in 2004, and Sanders began his studies through St. Meinrad Seminary in Indiana in 2007.

Sanders’ other son, Gregg, said, “It’s something we have been waiting for a long time. It was the pinnacle of the mountain (today). It is hard to describe all the emotions. It was a long, hard journey and finally arriving at home. It is unbelievable.”

Gregg, 29, recently finished his master’s degree at the University of Dallas and will begin teaching English in Lancaster, Texas, this fall. Gregg was a seminarian for the Diocese of Little Rock for four years shortly after he and his brother joined the Church in 2001.

Father Sanders is the second diocesan priest who is married. Father Alan Rosenau of Hot Springs was ordained 25 years ago after serving as an Anglican priest.

“George is a first for me,” Bishop Taylor said, “because he is the first married priest that will be ordained during my time here. I am so grateful to Brenda and how she has been a constant support through all the years with much patience and encouragement. And, of course, Eric and Gregg and the whole family.”

Helping to vest Father Sanders in his stole and chasuble were his home parish pastor Father James West of St. John Church in Hot Springs and two previous pastors, Father Erik Pohlmeier and Father Michael Bass. Father West was the first priest the Sanders met during their conversion.

“His sincerity and genuine faith and devotion to Christ and his Church drew him to us as we struggled to understand who the Catholic Church was,” Father Sanders said of Father West. “He was very patient and never seemed to look down on us when we did not have it all right.  He trusted our conversion to God and always believed that one day I would be a Catholic priest. It seems he may have been right on several accounts.”

Bishop Taylor celebrated the bilingual Mass with 23 priests, including Father Dennis Robinson, OSB, rector of St. Meinrad Seminary. Seated in the first rows were most of the diocese’s seminarians. Quietly sitting in the back of the church was seminarian Joseph Chan, who was in a near-fatal car wreck in March. After Mass, Chan came foward to get a blessing from the bishop.

“We were so grateful for how the Lord is working in his life. He is another miracle, ” the bishop said.