New church building underway with seating for 175 at Mass, to be blessed in 2014 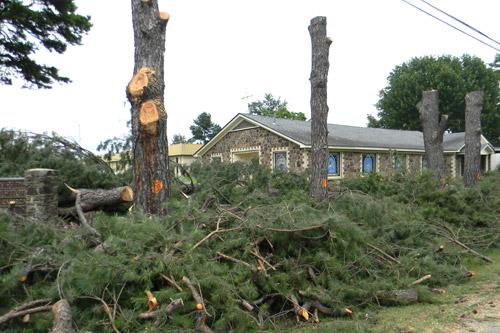 People working for Assumption Church in Booneville began removing trees from the construction site of a new church, next to the existing building, July 25.

People working for Assumption Church in Booneville began removing trees from the construction site of a new church, next to the existing building, July 25.

On the feast of the Assumption Aug. 15, 1956, a new Catholic church, dedicated to Our Lady and staffed by Benedictine priests from Subiaco Abbey, hosted its first Mass in Booneville (Logan County).

Next week, on the feast of the Assumption, current pastor Father Ravi Gudipalli will celebrate the last Mass in the existing church building. It will be followed by a potluck dinner and a sharing of 57 years of memories of a vibrant rural parish poised to expand.

Trees on Assumption Church site have already been removed to make room for a new church that will seat 175 to 200 parishioners at Mass. The existing church seats 85 parishioners, but Sunday Mass attendance averages 110 people.  Before the current church is razed, stained-glass windows, the tabernacle, altar and statues will be removed and stored for use in the new church.

Masses will be held in the parish hall for the next eight to nine months while the church is under construction.

The Catholic population of Booneville has been growing despite a 3-percent decrease in the total population over the past 13 years and a disastrous fire at a Cargill plant on Easter Sunday 2008, resulting in the loss of 800  jobs.

Former pastor Father Don Tranel, GHM, who began the church building campaign in 2008, said the parish has always been blessed with five or six RCIA candidates each year, but the entire town gained new respect for Assumption Church after the Cargill fire.

“Glenmaries have the charism of cultural sensitivity, and when we first got into town after the fire, we formed a ministerial alliance and organized a job fair with 34 employers within six or seven days,” he said. “Assumption donated $19,000 for a Cargill fund, assisted by Glenmary and the Knights of Columbus. The alliance was incorporated as a 501c3 and has a full-time staff person working five days a week. It helped people through a food bank, utility help, outplacement and resumé services and a thrift shop.”

Although Catholics are less than 10 percent of Booneville’s population, the entire community attended fundraisers  to help finance the church building project. Parishioners have raised $400,000 toward the project since 2009.

“Fifty percent of our parish members are under 18,” longtime parishioner John O’Bar said. “We had 75 students and staff at vacation Bible school last week.”

The parish youth group was honored twice as the best youth group in the diocese in the small-church category.

“We embraced stewardship and sweat equity,” Father Tranel said. “We didn’t hire anyone to do things we could do ourselves. Everyone took turns mowing the lawn. We had calluses and calluses. Being in church is a privilege, not a convenience.”

Father Gudipalli, who arrived at the parish in 2012, said that RCIA, youth and family enrollment is continuing to grow each year.

“There are so many kids here. The church is packed every Sunday with no place to sit. It was really exciting to come here last year. This will be the first time in my life that I will be building a church with my parish ... I’m happy that the people are so good and are doing so much good for our church.”