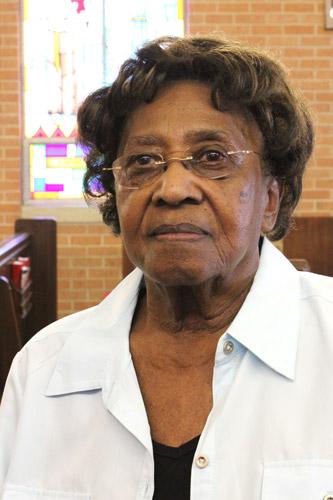 Dwain Hebda
Since 1985, Tereze Harris has awarded 160 scholarships to high school students in the Arkansas Delta through her foundation.

Dwain Hebda
Since 1985, Tereze Harris has awarded 160 scholarships to high school students in the Arkansas Delta through her foundation.

McGEHEE — Wedged between St. Mary Church and its retreat house are two squat pear trees. As specimens go, they aren’t much to look at. Yet even under the pounding Arkansas Delta heat, what draws the eye is the groaning yield of fruit. Pears ripening in the summer sun bend the cantankerous boughs every direction, flesh blushing with ripening promise, fed by the wizened hearts of the trees.

Tereze Harris, who calls this same ground home, has also borne much fruit. In stacks of photographs and clippings, yellow-tinted by time, she peers at the smiling faces of young people, some holding trophies, others merely standing awkwardly in their best attire.

“It feels like they are all mine,” she said.

Harris came of age when opportunities for women were limited, even moreso as a woman of color. But growing up in an achievement-oriented household, the academically precocious Frankye Harris (her given name) excelled.

She skipped two grades to enter Arkansas Baptist High School in Little Rock early, graduating in 1949 and completing Arkansas Baptist’s two-year junior college curriculum just a year later. Along with her mind, the experience also awoke an interest in religion. Safe to say, however, it wasn’t what her church elders anticipated.

“Our school was at 16th and High Streets and St. Bartholomew’s Church was a block away,” she said. “I’d see the sisters stroll by and I was fascinated. Every day I’d inch a little closer to the walkway and one day I said hi to them and they answered. They spoke! They talked to you!

“I was very interested in them and so I asked the president of the school if I could go visit and he said yes which is shocking to think about.”

The visit moved Harris from indifferent to inquisitive. Then a trip to Austin, Texas, one Christmas with LaVerne Lee, the school’s dean of women who was Catholic, changed the course of her life. It was the young Arkansan’s first time inside a Catholic church, but it felt like home.

“My family was all Baptist, but I had not been baptized, and I never joined a church,” she said. “Once I went on that visit, I knew that’s where I wanted to be.”

She was baptized at now-closed St. Anthony Church, McGehee’s black Catholic church. A few years later, she earned a teaching degree from AM&N College in Pine Bluff and a growing reputation as an education innovator. She founded Head Start in Desha County in 1971.

To Harris, teaching and service were inextricable and she entered St. Scholastica Monastery in Fort Smith in 1972, professing temporary vows as a Benedictine nun in August 1974. In some ways times were changing dramatically for Harris, the lone African American in her order.  In other ways, things hadn’t moved very far at all.

“It was difficult at times, it wasn’t always easy,” she said. “But it’s reality. Sometimes in life you just have to accept that everybody is human and they can’t always be what you want them to be. You have to accept them as they are.”

Harris took this philosophy into classrooms as a student and a teacher. To her education degree she’d add a master’s degree in administration from the University of Arkansas. She taught in St. Boniface School and Howard School in Fort Smith then returned to classrooms in the Delta communities of Arkansas City and Dermott. She still teaches adult education at a local college.

Harris left the order in 1984 but stays in touch with the Benedictines. She lived a life of example, working on numerous community projects, traveling extensively and serving her parish, St. Mary Church.

“I’d like people to say I worked to help others succeed,” she said.

In 1985, she launched the Tereze Harris Scholarship Foundation, followed in 1998 by the Andrew Gregory Memorial Scholarship Foundation. A single $250 award was presented the first year; last spring 13 students were so awarded. To date, the two foundations have awarded 160 scholarships to graduating seniors in Desha and Chicot counties demonstrating excellence in math.

Harris attends the annual awards banquet, which also recognizes top middle school math students with a trophy. She quizzes them, laughs, poses for pictures. She listens with pride as the evening’s speakers, which routinely include former students or scholarship recipients, cite her influence as a guiding force in their lives. One said, “Miss Harris always wanted everybody to learn.”

Last year, she attended a banquet of a different sort as the McGehee Chamber of Commerce named her Woman of the Year.