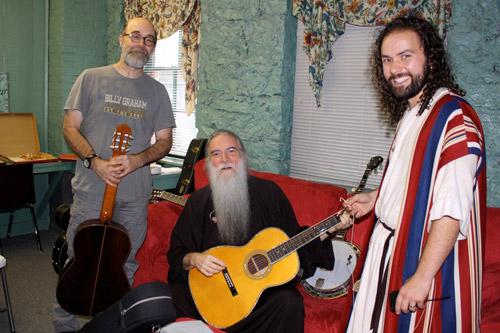 EUREKA SPRINGS — While doctrine may separate, music has a way of uniting.

Never was that more apparent than when two iconic musicians came together to celebrate their brotherhood in faith and to raise funds for a cause both believe is worthy of saving.

Eureka Springs City Auditorium was host to an event that was billed as nothing less than legendary, when its own native son, John Michael Talbot, one of Catholic music’s most popular artists, and internationally acclaimed evangelical artist Michael Card shared the historic stage Aug. 8 in a concert to benefit another big stage, The Great Passion Play. The day was proclaimed “Great Passion Play Day” by Eureka Mayor Morris Pate.

The evening was the first reunion for the two contemporary artists who have not performed together since their “Brother to Brother” album more than 10 years ago. The two musicians, who are both prolific authors as well, ministered to the audience of 655 in both song and word, singing duets featuring each other’s favorite compositions and conveying the gospel message as brothers in Christ. But, besides the concert, those attending also helped the evening’s real guest of honor, The Great Passion Play.

The Great Passion Play is considered one of the premier outdoor dramas in the United States. It was close to closing in December when it was announced that it owed $75,000 to the bank. Donations poured in to save the landmark event.

“I feel that the concert was a tremendous success for everyone involved,” said assistant executive director and cast member of The Great Passion Play, Kent Butler. “I have already heard testimonies from those attending the concert of how refreshing and spiritually rejuvenating it was. I was brought to tears by the congregational singing at the end of the concert when all clerics were invited on the stage as well as just the sheer beauty of the music.”

Since 1968, more than 7.7 million people have attended The Great Passion Play. Butler projects attendance at inspirational play depicting the last week in the life of Jesus Christ to continue to rise next season. The $12,590 raised from the concert, Butler said, will assist in promoting programs, feeding and caring for the animals and covering other expenses.

Kathryn Gough, a St. Vincent de Paul parishioner and field representative for U.S. Sen. John Boozman, presented the organizers of the event with a copy of the Congressional Record in which Boozman read a statement recognizing efforts to support The Great Passion Play.

“Hearing them both in person was so moving,” Gough said after the concert. “Both of their voices are amazing. The words they have put to music do so much to bring the proper perspective of life back to focus.”

Talbot, founder of the Brothers and Sisters of Charity at Little Portion Hermitage in neighboring Berryville, believes supporting the historic Passion play was also civic.

“When the Passion Play prospers, Eureka Springs prospers as well,” he said.

For Card, the historical significance of the evening was also personal. The concert transported him back to another time in history when his grandfather, a member of the John Philip Sousa Band, played for the first time in the Eureka Springs City Auditorium. Card, who was hosting a retreat at Little Portion that weekend, is an admitted fan of Talbot and believes their brotherhood is forged in Christ.

“Although we come from two different traditions, we are brothers in the Lord,” he said.

“That was the first time I have ever seen both artists,” said Libby Green, a St. Vincent de Paul parishioner who made the trip from Rogers to attend the concert that evening. “But I just feel in this world we need all the support we can get for our Catholic faith and for Christianity. Both the concert and the Great Passion Play help in spreading the gospel and that’s important to me and to our family.”

The Great Passion Play features almost 200 actors, live animals and special effects on a three-story set built into a hillside. Performances take place the first Friday of May through the last Saturday in October.