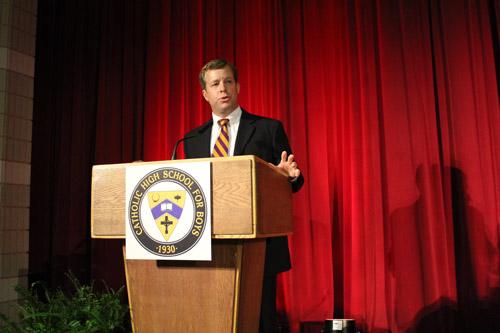 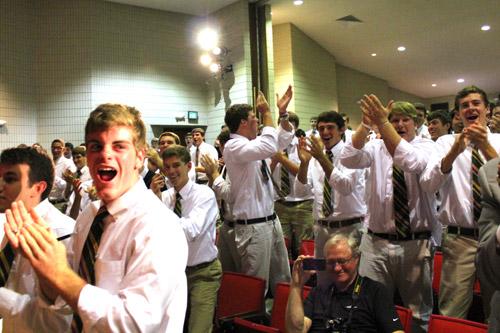 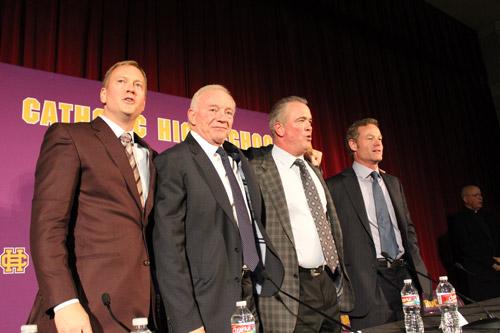 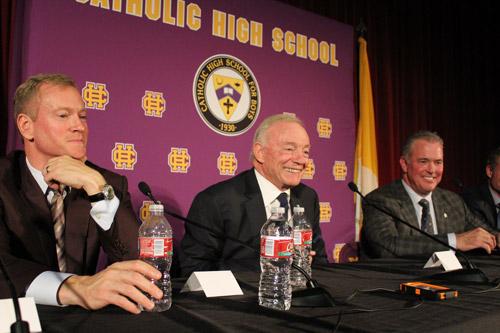 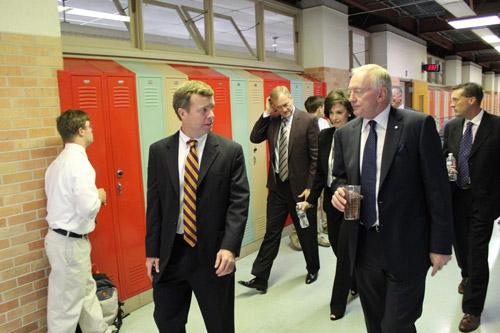 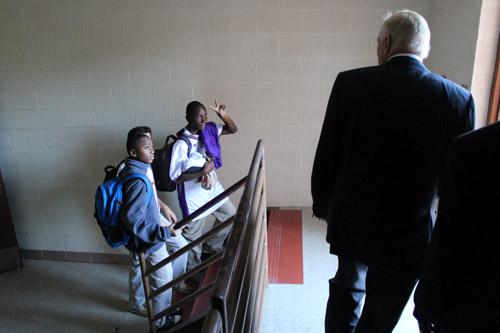 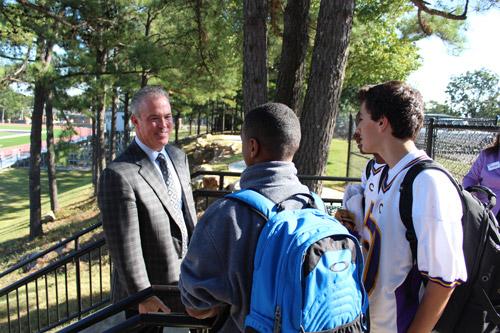 Gift announced Oct. 10 is largest in the history of Little Rock all-boys school 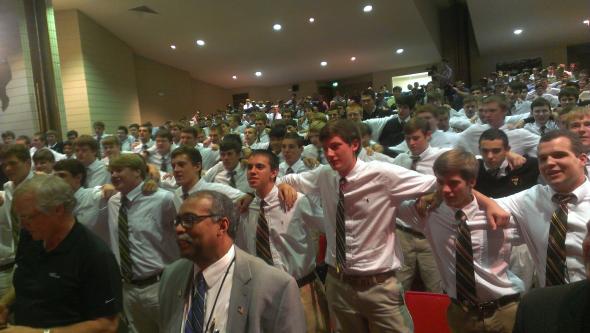 Dwain Hebda
Members of the Catholic High senior class sing the alma mater following the announcement by Jerry Jones of a $10 million donation to the capital fund.

Dwain Hebda
Members of the Catholic High senior class sing the alma mater following the announcement by Jerry Jones of a $10 million donation to the capital fund.

Walking out of the Catholic High School locker rooms en route to practice, three freshmen football players turned a corner and came face to face with a white-haired man briskly descending the stairs in a well-cut navy suit. As they stopped to let the man pass, their eyes widened in recognition of Jerry Jones, owner of the Dallas Cowboys.

“How ya, doin,” Jones asked nonchalantly to the boys frozen speechless in their places.

It wasn’t the first audience Jones had surprised on his Oct. 10 visit to Little Rock. Earlier in the afternoon, before an audience of the senior class, faculty, staff, guests and a throng of local media, Jones announced a contribution in the amount of nearly $10 million was being made by the Gene and Jerry Jones Family Charities of Dallas, San Francisco 49ers co-chairmen and former co-owners Denise and John York and an anonymous Catholic High alumnus, in support of the school’s capital campaign.

“Nobody lives a life of all highs, but this is a high,” Jerry Jones said, his eyes welling with tears. “My family and I get to do something in the name of and for someone that we love.”

That someone is the late Msgr. George Tribou who served as Catholic High School rector and principal for 35 years. Jones’ sons, Jerry Jr. and Stephen, and his son-in-law, Shy Anderson, graduated from the school in the 1980s and each shared a story of their encounters with Msgr. Tribou in their brief remarks. All said his impact on their lives was indelible.

“He was right more times than most,” Jerry Jones Jr. said. “He stressed it was not about feeling good but being good.”

Stephen and Jerry Jones were visibly emotional and struggled to maintain their composure during their remarks. Stephen Jones remarked, “Next to my dad, Father Tribou was like, father 1A. We love him and we miss him.”

Jerry Jones, when asked if he could say one thing to his friend, who died in 2001 and for whom he served as pallbearer, said, “I hope we’re doing a little bit to make you proud.”

Members of the York family were unable to attend the event, but John York, class of 1967, said in a statement, “This capital campaign will help ensure that the same quality education and experience I received will be passed down to more generations to come. Just being a part of the Catholic High history and tradition is an honor.”

The Jones and York contributions match an earlier commitment from the anonymous alumnus with the three packaged as a collective gift. It is the largest donation in the school’s history and effectively meets the campaign goal just 14 months after it was announced. However, the new gift includes a matching component that, if maximized, provides an opportunity for donors to exceed its $15 million target. Any new gifts made between April 2013 and April 2016 are eligible to be matched.

As Steve Straessle, CHS principal summarized, “This gift gets us near the goal line, but we are not finished yet. We still have work to do to meet and exceed our goal.”

Jerry Jones wasted no time pounding a bully pulpit for raising the additional funds. At the alumni dinner later that evening, Jones turned capital campaign evangelizer, urging the 1,000-plus in attendance to step up to the plate and help push the campaign past the original goal.

Calling himself “a soldier for Catholic High,” he said he wanted his to be “one of hundreds, even thousands,” of contributions to the campaign.

The capital campaign supports renovations to the school for technology, mechanical systems and classroom upgrades. It is the first major renovation since the current school was built in 1950. New windows, Roy Davis Athletic Field and track, and the updated cafeteria and gymnasium have all already been completed as part of the project.

Following a whirlwind day, Straessle expressed gratitude for all who had contributed thus far to help the school complete the renovations. He said the ability of the school to attract such participation demonstrates the enduring quality of Catholic High.

“You cannot sell a bad product,” he said. “If you believe in what you have and share that belief among your closest stakeholders to the wider community, there is no goal that is insurmountable. Everyone and anyone who walks onto the Catholic High campus, I think, knows instantly what we believe.”