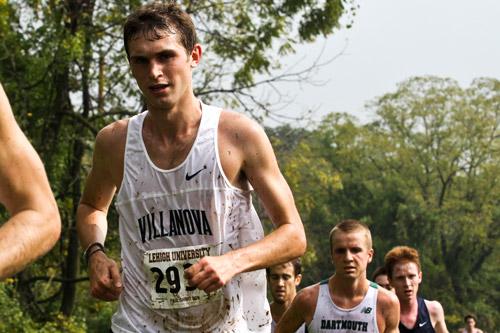 For everything else that Alex Tully has conquered in his collegiate life, the cold still holds the upper hand.

Tully hates the cold, especially the particular brand of cold they serve up in places like Indiana, Wisconsin and right there on the campus of Villanova University in Pennsylvania. It is impossible to describe to his former Catholic High classmates, especially those whose collegiate lives played out in more reasonable southern climes. And, it is equally impossible to explain to his northern-born running mates exactly what the cold does to his Arkansas blood, forcing him to bundle up on training runs and curse the time between stripping off his sweats and the sound of the gun at meets.

“It was a lot different coming to school in the northeast,” he said. “The weather — well, it’s just really cold. My teammates still laugh at me all bundled up on runs.”

It has to be this way, you see, because if Tully had somehow managed to reconfigure his metabolism and become impervious to the elements, it just wouldn’t be fair. As a kid who has already overcome and excelled at enough things to put most pedestrians to shame, it’s somehow comforting to know that he hasn’t mastered the elements. Yet.

“I’m extremely blessed,” he said. “Starting with my mom and dad and continuing at Catholic High, I was always taught to work hard, take responsibility and take pride in what I was doing. I heard it so much, it just became natural. I’m not afraid of a challenge.”

Tully got used to being the new face in the crowd early. His family moved to Little Rock from Fayetteville in 2005 four days before the start of his freshman year. He came to running late too, his first love being soccer, stepping away from one of the elite high school programs in the state his junior year to focus on distance.

“It was a decision that really pained me,” Tully said. “They bookended state championships either side of my junior year.”

Such team glory was not to be had in cross country and track — to date the Rockets have yet to bring home a team title in either activity — but individually, he was a natural. After placing ninth at the state cross country meet as a junior, he improved to third the following year. He topped that with a state gold medal at 3200 meters on the track, and a third place showing in that distance at the Meet of Champs to close out high school.

He arrived at Villanova in 2009 on the strength of an academic scholarship and a good word put in by his high school coach Frank O’Mara, who touched base with Wildcats head coach Marcus O’Sullivan. In 1985, O’Mara and O’Sullivan were teammates on a world-record-setting relay team and are considered two of the greatest milers Ireland ever produced. Tully was given the opportunity to walk on and he quickly discovered that what passed for outstanding in Pulaski County paled against the slate of international talent awaiting him in Pennsylvania. He redshirted his freshman year, hitting the engineering books and working to better his time.

The promise of his sophomore year was cut short by injury which bruised his psyche as much as it did his knees. His academic life was going great and he was consistently scoring high in his engineering coursework and if he ever entertained thoughts of quitting it was during the eight-month recovery. Then his coach made a seemingly random offer.

“At the end of that eight months, Marcus said, ‘I want you to meet me for a run, two times a week,’” Tully remembers. “We did that for two months. By the end of it, it didn’t hurt anymore. For him to do that for a kid who wasn’t adding anything to the team was incredible.”

Tully repaid the commitment of his coach and teammates in a big way during last year’s cross country season when the squad entered the regional meet needing a top-two finish to advance to the NCAA Championships. Considered a better track threat, he shocked everyone with a fast start, himself included.

“The whole race I was up front,” he said. “Then, when my teammates went by me they all patted me on the back encouraging me. It was a gut race.”

The personal best performance placed him 14th, earned him All-Mid Atlantic Region honors and sent Villanova to the national meet by a single point. It’s his best competition memory as a college athlete although in this, his fifth year of eligibility, returning home to run the Oct. 5 Chile Pepper Festival cross country meet in Fayetteville comes close. It was his first collegiate race on Arkansas soil.

“It was really one of the best experiences of my career,” he said of running in front of family and friends. “It was just really great to be home.”