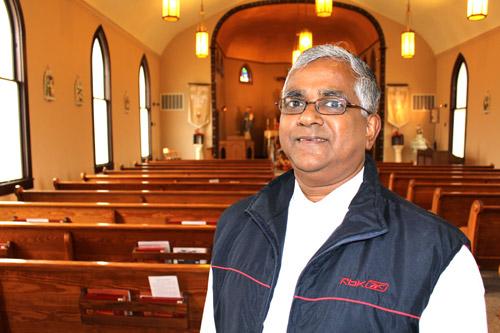 Dwain Hebda
Father Josely Kalathil conducts a tour of St. Ignatius Church in Scranton. In 25 years as a priest, Father Kalathil has served assignments in Nepal, the United States and his native India.

Dwain Hebda
Father Josely Kalathil conducts a tour of St. Ignatius Church in Scranton. In 25 years as a priest, Father Kalathil has served assignments in Nepal, the United States and his native India.

SCRANTON — There are far more pastures than parishioners in the three northwestern Arkansas parishes entrusted to Father Josely Kalathil, IMS. Yet for all of the serenity and relative quiet of these places, Father Kalathil’s territory in the foothills of the Ozark Mountains has enjoyed more than its share of celebrations lately.

In May, St. Ignatius Church in Scranton observed its 100th anniversary and St. Meinrad Church in Prairie View — blessed three days later in January 1913, just two and a half miles away — celebrated its centennial in June. (A third parish, Sts. Peter and Paul Church in Morrison Bluff, is 132.)

Lost in the hubbub was yet another milestone, Father Kalathil’s 25th anniversary of ordination to the priesthood. An oversight to be sure, but an honest one, given his modesty over such an achievement. In fact, when called by Arkansas Catholic for an interview, he was puzzled by the request.

“I don’t think such a thing is so important,” he said, pleasantly.

Father Kalathil, 59, was born the youngest of four sons to John and Mary Kalathil in Gothuruthy, Kerala, India. Kerala is a coastal gem sandwiched between the Arabian Sea and Western Ghats mountain range. As India’s smallest state, comprising just 1 percent of total land, the population is densely packed.

While Christians represent less than 20 percent of the religious mix, Father Kalathil grew up in an area that is heavily Catholic. After graduating from parochial St. Sebastian High School, he looked around for a calling in his life that spoke to his servant’s soul.

“I came to my vocation late, I was already in my 20s,” he said. “I wanted to do something for other people in the underdeveloped areas.”

He took a vocational cue from his next eldest brother, Father Herbert Kalathil, OCD. He was accepted to Viswa Jyoti Gurukul, Christnager, a theological college located in Varanasi, home to some of the worst slums in Asia.

Varanasi is also home to the motherhouse of Indian Missionary Society, an order dedicated to serving the poor and marginalized, like the thousands of abandoned and exploited children who live like rats in a shanty town near the local railway station. Since its founding, the order has expanded to a dozen Indian states and wherever it goes, the order sets up English language schools.

Following his ordination April 4, 1989, Father Kalathil spent 20 years in various assignments in the northern regions of India and in neighboring Nepal. He helped establish St. Mary School in the Fatehpur District of Uttar Pradesh, a school that would grow into a prestigious and thriving institution. He wouldn’t see that firsthand because shortly after it opened his superior, Father Abhishiktanand, informed him he would be headed for the United States.

Arriving in Arkansas in 2010, Father Kalathil got his legs under him as associate pastor under Father Barnabas Maria Susai, IMS, now pastor of St. Bernard Church in Bella Vista. He said landing in Logan County, Arkansas, in 2011 wasn’t as big of a shock as one might think, especially given the level of devotion shown by his regular parishioners.

And, there’s work to do. While lacking the visceral impact of the misery of a slum, Father Kalathil said the inward decay of the faith, especially among younger Catholics who don’t tend to stick around after high school, presents its own unique challenges here.

“The new generation is losing that deep faith,” he said. “Faith gets marginalized, it gets sidelined. In India, the Church is well-established but here it can be one step ahead, two steps back sometimes.”

His Arkansas tenure has also afforded him time to indulge a love of writing and art. He’s published five books in three languages, including “A Blade of Grass” in 2013, a collection of devotions interspersed with his own original drawings. Some he sends to Father Abhishiktanand and the sales help support DARE, a nonprofit organization the order co-founded to help rescue local children. He’s got more books in the works, inspired as he is by the faith that surrounds him.

“The faith is very much the same, very,” he said. “The real Gospel values, they are all the same there or here.”