National collection to be held in Arkansas, other dioceses across U.S. Nov. 23-24 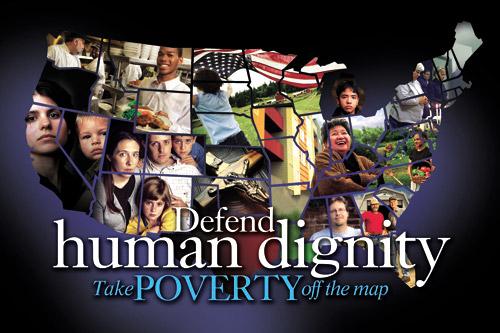 WASHINGTON — The Catholic Campaign for Human Development deserves the full support of the U.S. bishops because of its success in fighting poverty, said a group of Catholics on the eve of the U.S. Conference of Catholic Bishops’ fall general assembly Nov. 11-14 in Baltimore.

In a letter addressed to all of the bishops, 47 Catholic leaders, including three retired bishops and former USCCB staff members, urged the prelates to “redouble your commitment to social ministries that lift people out of poverty,” especially CCHD.

The letter appeared as a full-page ad Nov. 11 in the Baltimore Sun newspaper.

It was prompted by continuing criticisms of CCHD, the bishops’ domestic anti-poverty arm, from a small number of organizations that claim local anti-poverty agencies funded by the program have worked in coalitions that include members that do not share Church teaching on issues, such as its opposition to abortion and same-sex marriage.

The letter writers pointed to “well-funded groups” that “attack CCHD and pressure” the bishops to withdraw from such coalitions. They added that they do not believe that such collaborative efforts tarnish the Church’s reputation, but uphold biblical tenets upholding social justice.

Among those signing the letter were retired Bishops Ricardo Ramirez of Las Cruces, N.M., and Sylvester D. Ryan of Monterrey, Calif., and retired Auxiliary Bishop Thomas J. Gumbleton of Detroit.

The letter was the result of a joint effort among the letter writers and Faith in Public Life, which bills itself as “a strategy center for the faith community advancing faith in the public square as a powerful force for justice, compassion and the common good.”

In June, Faith in Public Life issued a report charging CCHD’s opponents with undertaking a “witch hunt.” It accused groups such as the American Life League and the Reform CCHD Now Coalition of “creating a culture of fear around community organizing,” based on interviews with community development experts, nonprofit directors and national philanthropic leaders.

Sabrina Burton Schultz, director of life ministry in the Diocese of St. Petersburg, Fla., said she signed the letter because CCHD has been “unfairly persecuted.”

The annual collection for CCHD is scheduled to take place in the Diocese of Little Rock Nov. 23-24.