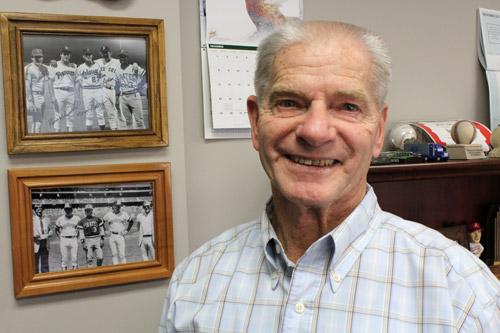 Dwain Hebda
“I felt many times going to work in the morning how blessed and how grateful I was to the Lord for allowing me to be able to coach.” — Norm DeBriyn, former University of Arkansas baseball coach

Dwain Hebda
“I felt many times going to work in the morning how blessed and how grateful I was to the Lord for allowing me to be able to coach.” — Norm DeBriyn, former University of Arkansas baseball coach

FAYETTEVILLE — Norm DeBriyn hasn’t coached in more than a decade, but you’d never know by looking.

His office at the University of Arkansas Foundation, clogged with photos, souvenir baseballs and other knickknacks isn’t altogether tidy, in fact, not even close. Several team photos on one wall yawn a couple degrees past level. He can navigate his iPhone, but anything more technical and he signals for his co-worker and fellow Catholic, the ebullient Elizabeth Sullivan, like a closer in from the bullpen.

In short, he’s everything you’d imagine in a baseball coach and the baseball community agrees. He will be awarded the 2014 Lefty Gomez Award Jan. 3, denoting outstanding contribution to the game by the American Baseball Coaches Association.

“I guess I was surprised because I’ve been out of the loop for a long time,” he said of the latest honor. “It was just completely out of nowhere.”

His first athletic glory came representing DePadua High in Ashland, Wis., a slice of America poised on the lower lip of Chequamegan Bay where ore-hauling ships docked to take on their cache of coal before sailing out into greater Lake Superior. In addition to his athletic skills, he also developed an early appreciation for those living a life of vocation.

“We had nuns, and our priests were of the Franciscan order,” he said. “You know, their life and the way it seemed to follow the will of God always had a deep impact on me.”

After a two-sport collegiate career that landed him in the University of Wisconsin Oshkosh Athletic Hall of Fame, life dealt a humbling early blow to the talented lefty outfielder/first baseman.

“I could make contact, but I didn’t have the power,” he said. “I thought Detroit was going to sign me, I was there for an extensive workout, and I know to this day that if I had hit one home run …”

“I remember a scout telling me, ‘You know, as big as you are, you should hit the ball a lot further than you do.’ And I said, well, thank you.” An edgy chuckle. “You remember that, you remember those comments.”

Missing the majors fueled baseball coaching at Hortonville (Wis.) High School, followed by the freshman team at then-Colorado State College at Greeley. A summer job as a driver’s education and health teacher got him to the University of Arkansas in 1969, a position extended to the fall term when the Hogs’ baseball coach moved on.

“I could tell Arkansas wasn’t doing much with baseball at all, I mean, even the coach was part time,” he said. “I thought, I might get that job. Nobody’s gonna want it.”

It wasn’t exactly a plum gig and even in his enthusiasm at being head coach, DeBriyn knew it. There were no facilities, no money, nobody cared. Still, he dug in, bringing endless energy and a teacher’s mentality to the sometimes-unforgiving job. Before he knew it, 33 years and 1,817 games had gone by, 1,161 in the win column. The present-day stadium may bear the name of its financial benefactors, but the foundation is all his.

“Basically I love coaching,” he said. “I felt many times going to work in the morning how blessed and how grateful I was to the Lord for allowing me to be able to coach.”

Norm DeBriyn hasn’t been a Catholic deacon for 18 months yet, but you’d never know by looking.

He’s settled into his assignment at St. Thomas Aquinas University Parish in Fayetteville where he’s officiated a couple of baptisms, funeral vigils and delivered some homilies. The first one, “Truth” preached on Christ the King Sunday in 2012, was more nerve-wracking than any of his 15 post-season appearances, four College World Series berths or three conference championships.

“I did the homily on All Saints Day (Nov. 1) and (pastor) Father Joe (Marconi) said, ‘You’re becoming a homilist,’” he beamed. “That was a nice comment.”

Getting here was every bit the journey coaching was, assisted each step by his wife Caroline, a pretty tough coach in her own right. He tries to lead people in the same way he led his players, helping them make the most of what God’s given them and work through the rest. It’s unfamiliar territory; difficult for a man who for so many years dominated his environment. But he almost didn’t get in at all and that near-miss with the diaconate, like the majors, drives him to be better every day.

“That’s what I’m going through right now. Learning everything,” he said. “I’m not the sharpest tool in the box, and I know that. But I study and I’m getting more comfortable with everything. It’s good, I really enjoy it.”