Sister Carol Anne Corley: A fisher of men (and women)

Hot Springs nun, a renowned angler, has led many a budding fly fisher to water 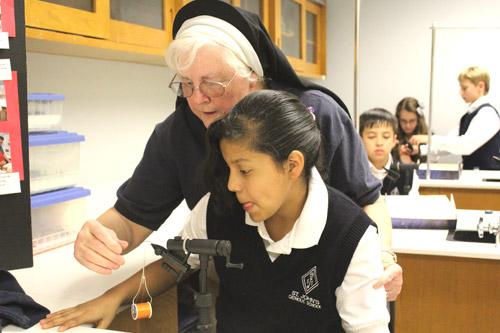 “Are any of you left-handed?” she asks, then seeing none adds, “Ah, what a blessing. Thank you, God.”

Sister Carol Anne doesn’t have a thing against left handers, except that it requires a completely reconfigured workstation, just as she doesn’t hold a grudge against any particularly kind of fish or means of snagging them. But truth be told, fly fishing holds a particular place in her angler’s heart. It has been both recreation and avocation for nearly 30 years. It is, in a word, personal.

“Anytime you stand in the middle of the stream,” she said, “and you just get immersed in the water and in nature, and you see God’s gifts and goodness, you cannot not know there’s a Creator.”

Sister Carol Anne retired from St. Edward Mercy Medical Center in Fort Smith in 2001 and moved to Hot Springs where she has been involved in environmental programs at the school ever since.

She was born in Missouri and learned to fish at the age of 3. Wherever her vocation took her, she adapted to that region’s brand of fish and methodology for catching them. So when she landed in Fort Smith in 1986, it just made sense to wade, literally, into fly fishing.

“Arkansas is famous for fly fishing,” she said. “I was in Springfield, Mo., and when I left the people I worked with gave me a gift of a $100 gift coupon card to Bass Pro Shop.”

Wanting to make that gift go as far as she could, Sister Carol Anne dug through discount bins and catalog returns to assemble a hobnob of mismatched gear, hit Kmart for a rod, line and starter flies, then set out to learn the art of the craft.

“Every night after work, I’d go down to Carol Ann Cross Park, which is right down the hill from the hospital in Fort Smith and start teaching myself to fly fish,” she said.

For someone who would gain such notoriety in the sport that in 1999 she traded barbs with David Letterman and in 2002 no less than Smithsonian magazine chronicled her life in the stream, Sister Carol Anne’s start in the sport was awkward.

“You should never teach yourself to fly fish,” she said. “I had this two fly rule, I would fish as long as two flies would last, because I couldn’t afford more than that. Some nights that was very quickly, but sometimes I managed to do pretty well.”

Relentless practice and the camaraderie of a local fly fishing group wore smooth her form flaws, but her resultant cast was unorthodox. But Sister Carol Anne wasn’t in the stream for style points and she proved devastatingly effective.

Given her vow of poverty, the sheer economics of the sport probably would have led her to fly tying at some point. But Sister Carol Anne’s love for the art form dives deeper than that. She first picked it up from her brother John, with whom she would spend hours during his treatment for kidney cancer. Too sick to fish, John would tie flies and teach his sister the art’s finer points. When John died in 1994, his family gave her his fly tying gear.

“They said we really want you to do something good with this,” she said, her face glowing at the memory. “What a wonderful gift.”

Since then, she has fulfilled that directive by teaching young people and adults alike the art of tying flies. After she burned through the materials her big brother left her, she began to improvise with materials that were far less expensive and therefore far more accessible to the average person. Her adventures formed the basis for her teaching course, titled “Fly Tying on a Shoestring,” which she has taught in schools, community colleges and workshops all over the country.

“I began to think, there’s a cheaper way of doing this,” she said. “I realized there are many inexpensive things you can use to substitute for materials. Some you can’t, but I would say that probably 80 percent of stuff you can find in craft shops, sewing stores, whatever.”

Her resourcefulness has seemingly no bounds — she’s been known to swipe the very tails off roadkill squirrels or produce fuzz by grinding yarn in a coffee grinder. Her coupe de grace, the Resurrection Fly, she created using plastic Easter grass.

Sister Carol Anne, who marked 50 years as a Sister of Mercy in 2013, doesn’t have the knees for standing in the streambed for the eight or 10 hours she used to and it is easy to see how much she misses an afternoon in Arkansas’ Norfolk River. It’s there that the years have revealed the apt metaphor for God moving people into a life of vocation and through them, spreading grace to others.

“(In fly casting) you don’t use your power to move anything; you use the rod’s power to move the line,” she said. “I always tell people, ‘You cannot fly fish in an ugly place or with an ugly disposition.’  Your place must be peaceful and you must be too.”