Pullam tells story of the Cathedral, a tour at a time 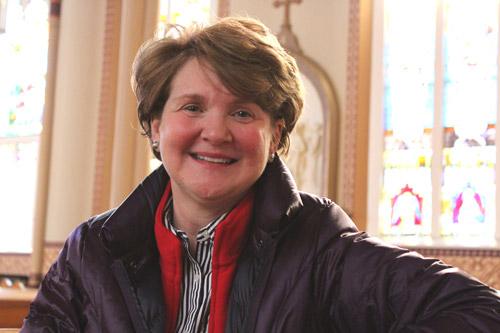 Dwain Hebda
Margie Pullam relaxes in between tours at the Cathedral of St. Andrew in Little Rock.

Dwain Hebda
Margie Pullam relaxes in between tours at the Cathedral of St. Andrew in Little Rock.

Why you want to know Margie: As chairman of the Docent Committee of the parish Ladies’ Guild, Pullam and her cadre of volunteer docents, or tour guides, show Catholic and non-Catholic groups alike the historical, liturgical and architectural wonder that is the official mother church of the diocese.

In her own words:

Arkansas Catholic’s theme this year is “Tools for Discipleship.” What religious items or tools – Bible, rosary, religious books and periodicals, etc. – do you rely on regularly to inform and inspire you?

I had cancer in 1999 and a friend of mine sent me a card with this beautiful Scripture verse: ‘For I know the plans I have for you, says the Lord. They are plans for good ... to give you a future and a hope.’ (Jeremiah 29:11). That’s what I go to, that one always makes me feel a little bit better.

Also, the rosary my mom gave me from her trip to Medjugorje that was blessed by Pope John Paul II. It is always at my bedside and is my ‘go to’ security blanket in happiness and sadness.

You moved here for your husband’s work. What was that like?

We came here in ’74 from New Orleans and I was not a happy camper, initially. It wasn’t exactly what I ever thought I’d ever do, leave home. But of course I came to love living in Little Rock; it was such a difference, but it was a difference that I grew to love.

What was the biggest adjustment?

Food, especially. When my mom would visit, she’d have her little cooler on the flight and have shrimp in it for us and especially blue crabs, you know. You have to have crabs to make gumbo.

When I first moved up here, I also had a really strong New Orleans accent. Like, ‘Ow fawtha woo ahrt in heav’n,” We sound like we’re from New Jersey.

You worked at St. Vincent Infirmary all those years, right?

I worked in an emergency room in New Orleans, and I wanted to keep doing that. I called Baptist first and they didn’t need anybody so I called St Vincent’s and it was like ‘Can you come in tomorrow?’ It was just God’s finger in it. I was there for 39 years.

I hadn’t been here very long when they brought this elderly man in. I was in there doing what I needed to do, and I turned around and at the door there were some sisters and one of the priests. When the doctor came in and pronounced this gentleman, some people were praying behind me so of course I started to pray too. And then I realized it was Bishop (Albert L.) Fletcher. I have realized that it was such an honor to be there and to be a Catholic during that.

How did you get into volunteering as a docent?

I always loved the St Louis Cathedral and a lot of historical things in New Orleans. My mother had a couple of friends that were tour guides down there, and I used to say if I was home I would do that. So I thought the docent would be really fun. I just love it. It is so, so interesting.

What are group’s favorite parts of the tour?

Oh heavens, hands down with the kids, the crypt. They also like going up around the altar and being able to see the bishop’s chair. The adults, it just runs the whole gamut.

So much symbolism is tied up in Catholic architecture. Do you find you talk as much about the faith as the building?

Yes, yes, and sometimes I don’t even realize it. One of the Protestant churches in town sent me a note that said, “We thought we were coming just to see the interior of the church, but what we learned so much more about was the Catholic faith.”

The thing is, almost every tour, I learn something because somebody will ask me a question that I’ve never thought about. I learn a lot about things that I took for granted or were so rote growing up a cradle Catholic and in Catholic schools. We had the Baltimore Catechism then and you memorized it. You didn’t ask a lot of questions.

I guess the thing I really love about being in here is coming about 10 or 15 minutes before the tours come. It’s all quiet like this and you can just sit and it’s relaxed and you get your thoughts together. I just love that. It’s a beautiful feeling.