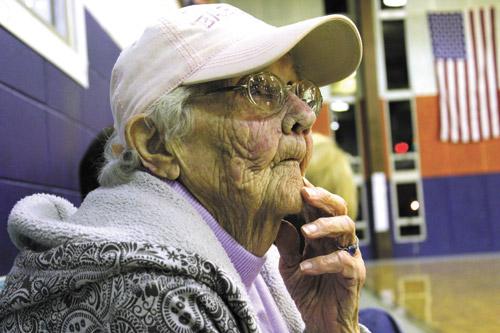 SUBIACO — It’s a crisp, clear Tuesday night at Subiaco Academy and the crowd is in full roar.

Cheers and chants rain down from the student section and the jazz band cranks out guitar-heavy classic rock at full volume as the Trojans take the court for the last home basketball game of the season. Technically, tonight is Senior Night honoring five young men and their parents in pregame introductions.

But truth be told every night that Elizabeth Strobel — the school’s oldest and longest-attending fan — sits courtside is senior night.

No one can pin down exactly when Strobel started attending Subiaco basketball games, but it wasn’t as early in her 98 years as she would have liked. As a young girl she asked her mother for permission to take in a game, a request that was denied, “because those players don’t wear enough clothes.”

Decades later she still cracks up over the story, peals of laughter cutting through the din around her, the portent of the irresistible spirit within. A spirit undimmed by nearly five-score years of life and faith that still holds this spot, still watches that ball, still cheers and claps for her team.

“I don’t think I’ve missed too many games,” she said. “I don’t know what it would be like if we didn’t have (the academy) around here.”

Even though she couldn’t attend the all-boys school, Subiaco is as much her alma mater as anyone who ever did. Her father, Pop Schriver, worked for the abbey for 70 years as a carpenter and all-around handyman. She was baptized and remains a member of St. Benedict Church right across the street and attended the now-closed St. Benedict School through the eighth grade. In 1937, she married Bill Strobel and the couple moved to a farm less than two miles from the abbey. For nearly 40 years she milked cows twice a day, raised a huge vegetable garden and five kids — two girls and three boys. There was no debate where the boys would be educated: The Strobels sent all three to Subiaco and got two back. Middle son Robert, who is now Brother Adrian, OSB, coaches the school’s tennis team and works in administration.

“It is really a delight because she enjoys the game so much and at her age she can still get around and enjoy the game, said Brother Adrian. “I am so happy for her.”

Asked how the son of the school’s biggest basketball fan wound up one of the most decorated tennis coaches in the state, she shrugs.

“Oh I don’t know, that happened after he went to school up here. I guess it’s something that he liked,” she said, adding, “He must be good at it, he won all kinda championships.”

In 1974, Bill and Elizabeth moved off the farm and with the newfound time on their hands, began attending basketball games and volunteering in the concession stand for football and basketball. She never developed a taste for the roughness of football, but she rarely missed a home basketball contest. When Bill died in 1995 and age took her out from behind the wheel, games became an important social outlet and an opportunity for mother and son to connect.

“I am so grateful that I can bring her to the game,” Brother Adrian chimed in. “She cannot drive anymore, but she sure likes to come here and do volunteer work.”

She moved to her courtside seat when the stairs up into the bleachers got to be too much and it is there that she intently takes in each game, flanked by school personnel and coaches’ wives. “Tell him that you still have Thanksgiving and Christmas dinners at your house,” says one during our interview. “And, she stuffs envelopes in the admissions office.”

Strobel is an active spectator, clapping for made baskets and wincing at collisions or hard fouls.

“It is very rewarding to look across the court and see her at the games,” said Tim Tencleve, basketball coach and athletic director.

It’s even been said she’s dressed down a myopic referee or two, even though her voice doesn’t carry the sting it used to.

There is little need for such critique tonight as the Trojans win by 30. Strobel doesn’t acknowledge victory until 40 seconds to go; then the game is over and with it another regular season. Baseball lies around the corner — another of her sports passions.

“These (blowouts) aren’t quite as interesting as the ones that go back and forth down to the wire,” she said. Her clear blue eyes twinkle a moment. “But, somebody’s gotta win.”